Dr. Cesar Morales was formally sworn in on April 16 as the new Ventura County Superintendent of Schools, becoming the first Latino and first person of color to hold the office since it was created in 1873.

In an outdoor ceremony this morning at the Ventura County Office of Education in Camarillo, California State Assemblymember Jacqui Irwin administered the oath of office to Dr. Morales. The ceremony featured speeches from students he has mentored and his colleagues in education and government. 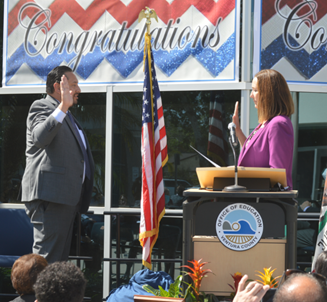 In his remarks after taking the oath, Dr. Morales thanked his parents, who immigrated from Mexico, for emphasizing the value of education throughout his childhood. “I stand on the shoulders of people who came to this country with a dream of a better life,” he said. Dr. Morales also reflected on people from past generations who were denied the chance to realize their dreams, “Not for lack of ability, not because they didn’t have the passion, but because there were struggles and obstacles and there were bridges that didn’t exist for them.”

As he begins his tenure as County Superintendent of Schools, Dr. Morales will focus on meeting the needs Ventura County’s students, school employees and school districts in the post-pandemic era. He is also committed to addressing diversity, equity and inclusion issues in local schools. He has already begun this work by spearheading the creation of a Social Justice Task Force which will present the first-ever VCOE Equity Conference on May 24.

Dr. Morales came to VCOE in 2019 as Associate Superintendent, Student Services. Before that, he served for nearly six years as the Superintendent of the Oxnard School District. He has held leadership roles in the Lawndale and Lennox School Districts in Los Angeles County. He also has experience in the classroom as a middle and high school teacher. Dr. Morales received his Doctor of Education degree from UCLA and his master’s and bachelor’s degrees from Loyola Marymount University.

As County Superintendent of Schools, Dr. Morales now leads the Ventura County Office of Education, an agency that employs more than 700 people and provides teacher training and administrative support services to all of Ventura County’s 20 school districts. VCOE also operates schools for students with special needs and at-risk students and provides career education for students countywide.

The County Superintendent of Schools is an elected position, but an appointment became necessary when former Superintendent Stan Mantooth retired in the middle of his last term. Dr. Morales intends to run for the position when it is next on the ballot in the June 2022 election.

A video recording of today’s swearing-in ceremony is available to watch at https://youtu.be/jMHQmjQTyfY.