Still another Election Fraud Hearing was held on 11-30-20, this time by some Arizona legislators.  It was chaired by Trump attorney and former NY Mayor Rudy Giuiliani. Last week there was one in Pennsylvania. A third one is going on in Michigan as I write this on December 1 and more are in the works. This is truly historic. I watched portions of all three.

During the AZ hearing, in a major political and legal slap in the face, the state certified the election, even though they were aware of the concerns and much of the evidence presented, in direct contradiction to the concerns of likely millions of people, experts, attorneys, legislators and eyewitnesses to improper actions connected with the election.

I have been following election integrity issues since 2004, when I first acted as a California Poll observer in Oak Park, Ventura County, CA, not exactly a hotbed of election fraud. But they have their problems, too. I saw more serious problems in 12 different precincts I monitored in Oxnard in three elections. But those problems were trivial compared to the scope, severity and audacity of what eyewitnesses and process experts revealed in stunning testimony at the PA, AZ and Michigan hearings. Much more has been revealed in dozens of other lawsuits. Even though I had other things that needed to be done, some urgent, I found myself riveted to the screen for much of the proceedings as the hearings played out. Everyone, regardless of political leanings, should view these. I see on MSM and even some reader comments on this site, that much of this is being discounted, mocked and that there is a strong effort to discredit or minimize it.

Too bad that peoples’ opinions on it are so strongly influenced by their political persuasions. This needs to be examined as objectively as possible. I have to be careful of my own confirmation bias, a tendency to jump on everything that supports my position. But what really drives things home is the impact of the dozens of eyewitnesses, who have the ring of truth, even some driven by their political passions. It would be very difficult to coordinate a web of lies throughout such a geographically diverse population of witnesses who mostly don’t know each other, to see such startling similarities in the M.O. of fraud and incompetence that they testified to.

A lot of the same concerns and type of evidence were presented here as were last week in PA. Just some highlights:

An estimated 769,000+ votes were not at all monitored by Republicans in the counting process. That doesn’t even include polling place activities.

The similar event last week in Pennsylvania rocked the political world, although “Mainstream” media alternately ignored it or attempted to undermine it. Having watched it showed me that more than enough votes are in question or obviously phony to warrant an in-depth investigation.

Today, as I write this, Michigan legislators are hearing witnesses to still more massive fraud. The MI hearing initially appeared to have a different, more skeptical leadership tone. But that was more than offset by dozens of mostly Republican eyewitnesses, demolishing any impression that there was election integrity.

“The next two hearings, we’ll be bringing in people who have first-hand accounts that they want to share with us, that they’ve already shared through affidavits,” McBroom told RRN. “Like I said, some of the affidavits are just plain silly. But there are a few that are very serious.”

McBroom was also clear that the hearings will not result in overturning the election results.

“I can say with confidence that no matter what we find, whether it’s mistakes or outright fraud, I don’t have an expectation that we’re going to find that degree of it that would change things,” the senator said. “Even if we were to look at Detroit and look at what we think are anomalies, and extrapolate from that a percentage that’s similar to other ‘blue cities’ votes, it doesn’t get us to 150,000 votes flipping the other way.”

They even blocked Rudy Giuiliani from testifying, claiming he had no first hand knowledge of Michigan activities. I wonder what McBroom is thinking now after getting an earful from dozens of eyewitnesses.

In spite of that, there was some pretty damning testimony. 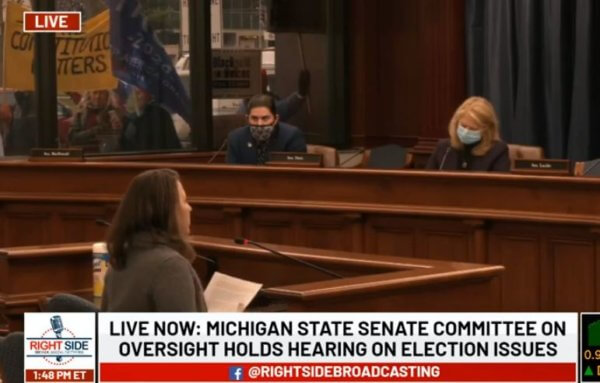 Witness after witness cited eyewitness accounts of lack of chain of custody, improper procedures,unlikely nearly 100% Biden votes in 2 batches of nearly 100,000 ballots, huge batches of ballots of people either not in the voter rolls or only in the latest last two days of new voter registrations, many ballot s duplicated under suspicious circumstances, Republican challengers harassed, intimidated, threatened, blocked, even thrown out if the area. The witnesses I watched had worked at the Detroit PCS counting center from 11/3-5.

Witnesses showed amazing persistence and courage to show up to work, insist on doing their jobs, deal with heavy resistance, withstand the threatening, intimidating climate, then testify boldly at the hearing.

Meanwhile dozens of lawsuits are in play in the so-called “swing states.” Many have been initially been dismissed, sometimes on technicalities like jurisdiction, standing, or other factors. Some aren’t good cases, some are. Some are going through the appeal process and are headed for the Supreme Court, which won’t have the capacity or inclination to hear them all in the tight time frame remaining before this month’s seating of the Electoral College.

Not only is the alleged scale of the fraud unprecedented, but so is the reaction to it via lawsuits, legislative action, protests and discussion. The Mainstream media compromised their own integrity and credibility in failing to report the problems and reactions, although there is now pressure on them to start doing so.

Some high officials are going to look very foolish, if not also corrupt, in so easily accepting the reported results, without detecting the fraud, then ignoring evidence shoved right in their faces. It is my understanding, that they were presented with much of this before the lawsuits, before the hearings. Yet, multiple states have certified their elections, Arizona rubber stamping its corrupted results even as the hearing proceedings were underway in Phoenix, AZ.

A local lame duck  Mayor told me that it is awful that people would attempt to impugn the integrity of the election system and in doing so undermine its credibility. I pointed out that the perpetrators have already done that themselves and that it is much healthier in the long term to get it out in the open to begin cleaning it up.

Richard Nixon was faced with a similar dilemma when he ran against JFK in 1960.  Historians and election experts now generally recognize that he actually won in Cook County (Chicago) IL It seems that he might have lacked the nerve and organization to push his case and finally conceded.

But this years’s election fraud was far broader, far more audacious and the stakes far higher than in 1960, when the party differences weren’t so great.

It is interesting how many of the same election “anomalies” occurred in swing state after state. Just some of the more common ones were: lack of process transparency, poor or nonexistent chain of custody, locking out observers/challengers, or making it nearly impossible to do their jobs, intimidation, harassment, questionable ballot handling and processing, including handling of “duplicated” ballots/military ballots/provisional ballots, cut-off dates, batch control, apparently unregistered voters, signature verification, denial of allegedly valid challenges, very unlikely supermajorities of Biden votes in some batches/districts, massive sudden changes in vote tallies, inconsistent enforcement/application of rules especially in a partisan manner, scanning ballots multiple times, observed machine votes changed to Biden, statistically highly unlikely voting patterns and more.

I can’t say what the outcome of all this will be, but the odds are against officials having the courage and integrity to honestly evaluate what occurred and act accordingly. The pressure and threats to go along and get along are enormous. These are the times that try men’s souls. This is likely the biggest election crisis since 1876, when state legislators had to intervene, per Article II, Section 1.2 of the U.S. Constitution. We’ll see if they are up to it and see if they are of the caliber of our Founders, who risked all to create a unique nation. Yes, Obama, we really are “exceptional,” or were.

But millions of people suffered even more of a loss of faith in the nation’s system of elections. It will have to be earned back by meaningful improvements or the consequences will be grave.

Election 2020: The Empire Strikes Back

Editorial By George Miller- Is the establishment striking back at President Trump and supporters? Was there massive election fraud? Yes, the title of this article was borrowed from Star Wars V and seems somehow befitting for current events, although the circumstances differ somewhat. An unlikely, irreverent, combative real estate billionaire takes on the left wing […]

Regardless of the outcome why would we be against insuring we have a free and fair election? If people observed irregularities they need to be investigated and we need to see it through. This is a huge wake up call. There has to be a chain of command and there has to be oversight. Poll watcher kicked out to being left so far away they might as well not be there at all is suspect enough. Carrying ballots across state lines, missing USB’s, postmarks being changed and filling our new ballots by anyone other than the voter themself is just unacceptable information to have and not do anything about it.

The reckless lies being thrown around by Trump supporters warrants a thorough inquiry and prosecution where appropriate. It is totally appropriate to expect and demand fair elections but fabricating allegations of fraud is fraud itself.

So, you’re just dismissing hundreds of affidavits/testimonies by normal people as all “reckless lies?” Seems like you are the reckless liar lurking on this site. Why don’t you go over to HuffPo, 538 or other lefty site where you would be taken seriously, because you aren’t here.

Lock him (Trump) up!