Electrification Of Society Requires A New And Smarter Grid

What receives little to no discussion are the changes and enhancements necessary to the electric grid and all issues related to delivery and movement of electricity.

Summary of the Grid Problem

In a white paper published by Deloitte, the problem of the grid in respect to massive electrification goals can be summarized as follows:

The distribution grid was not designed to accommodate intermittent output, fluctuations in power quality, and two-way power flows. Surges, spikes, or sags in supply can impact voltage and frequency and potentially impair grid stability, and in turn cause stress and premature aging of distribution assets.

A recent compact one hour webinar produced by AEE, an energy policy advocacy, highlighted the 2020 FERC (Federal Energy Regulation Commission) Order 2222 which was written to allow battery storage and DER’s into electrification plans. 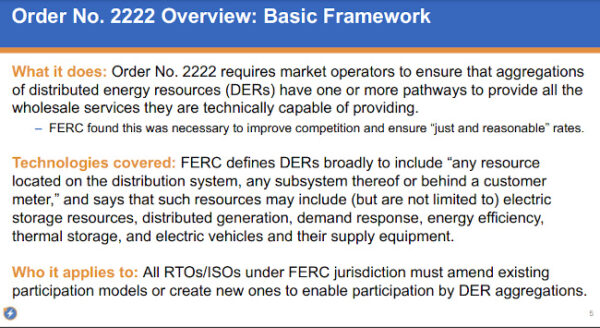 So what does this acronym laden slide mean? According to one source, a DER includes the following:

A distributed energy resource (DER) is a small-scale unit of power generation that operates locally and is connected to a larger power grid at the distribution level. DERs include solar panels, small natural gas-fueled generators, electric vehicles and controllable loads, such as HVAC systems and electric water heaters. An important distinction of a DER is that the energy it produces is often consumed close to the source.

The new FERC 2222 only applies to RTO/TSO (Regional Transmission Organization/Transmission System Operator). These entities are now allowed to create plans for demand management, real-time dispatching, aggregation of DERs for billing purposes, and many other features which could improve the wholesale distribution of electricity. The interesting challenge is that the entire country is not covered by the RTO/TSO model as the map below shows. 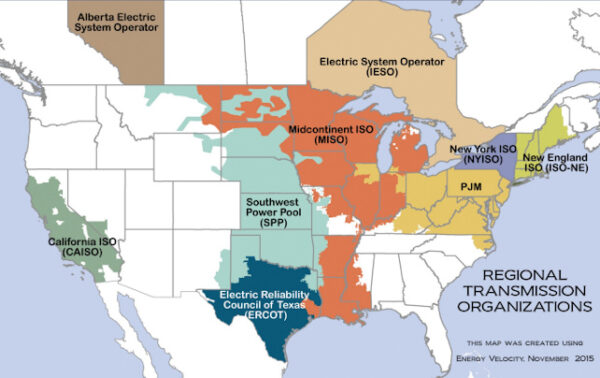 The CAISO (California) and NYISO (New York) have made the most progress with their new DER Integration Plans. Although Arizona is not in an ISO, plans are in process for a Distributed Demand Management System.

Another acronym to remember is VER (Variable Energy Resources), which includes wind power, solar energy and wave energy. These are variable resources due to the natural forces to which they are tied. They are also non-dispatchable, which means that there is no on-off button for these resources. Their output can be monitored or saved, but not dispatched when needed.

DERs are often dispatchable resources if they include the right software and hardware for communication to a larger grid management system. For example, a fleet of school buses would most likely include battery storage to maintain the buses’ charge; however, if the grid started to lose capacity, a smart system would know of these resources and take the battery energy into the grid. Thus using the DER model, the potential for grid power enhancement is theoretically possible. Home chargers for EVs could also be included in this model using vehicle-to-grid technology. The challenge is how to pay for this energy from these sources. One solution is aggregation, where a smaller aggregator takes responsibility for dispatching and billing all of its registered DERs. The keyword here is “registered”. The NYISO is ahead of the curve in its planning for the integration of dispatchable DERs.

Grid is a Moving, Living Target

What the DER model is leading up to is a “Smart Grid” which of course must happen in stages without causing the current system to fail. The Federal government established the Smart Grid Taskforce. Read about the goals of the 2007 grid modernization plan here.

PLEASE TELL YOUR FRIENDS ABOUT CITIZENS JOURNALKeep us publishingPlease DONATE

Politico 8/9/2022: The tension between grid reliability and clean energy will be the subject of a hearing this morning in the Senate Subcommittee on Clean Energy Future, chaired by Sen. Josh Becker (D-Menlo Park). The subcommittee will hear from energy and clean power experts, including the California Independent System Operator, as it looks for an “initial policy toolkit of renewable solutions to maintain grid reliability.”

New $8 billion grid but is it smart?

New but not smarter. Designed in 2007…
https://www.eenews.net/articles/what-an-8b-western-grid-project-means-for-u-s-clean-energy/