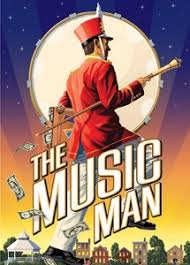 Rehearsals begin April 30, (generally) Monday – Thursday evenings, and Saturday afternoons. Not everyone will be called to every rehearsal.

All auditioning should prepare 16 bars from any Broadway show, including The Music Man. Everyone auditioning must sing first. We won’t provide an accompanist, so please bring a recording of the song you plan to sing. We can amplify most songs on your phone or other device.

WE SEEK THE FOLLOWING CHARACTERS:

Harold Hill: A dynamic con man and traveling salesman, Prof. Hill comes to River City, Iowa, and creates a hysteria about the “trouble” of the new pool table in town in order to sell band instruments and uniforms. He promises to form a wholesome boy’s band, though he can’t read a note of music. His main ambition, besides fleecing the good citizens of their cash, becomes trying to win over the local librarian. Seeking an actor with tremendous charm and charisma. This is one of the great roles in American Music Theater; currently played by Hugh Jackman on Broadway. All actors auditioning for Harold must perform part of the number “Trouble” in addition to their audition song. Age Range: 35 – 45.

Marian Paroo: A sometimes stuffy librarian and piano teacher, Marian sees through Harold’s charade and sets out to expose him as a fraud. Seeking a strong actress with a lovely soprano voice. Marian is a classic leading lady with a mind of her own. Age Range: 25 – 35.

Eulalie Mackecknie Shinn: Mayor Shinn’s peacock wife, is easily won over by Prof. Hill when he appoints her the head of the “Ladies’ Auxiliary Society for the Classic Dance.” Mrs. Shinn is a large and boisterous character. Seeking an actress with great comic timing. Age Range: 45 – 60.

Marcellus: Harold’s old friend and former partner, Marcellus is now a resident of River City. He’s given up his con man ways and is dating his boss’s niece, Ethel Toffelmier. Seeking an actor that dances and sings. Age Range: 35 – 50.

Charlie Cowell: A traveling anvil salesman, Cowell tries to expose Harold as an imposter. He is a slightly smarmy man that attempts to seduce Marian. Seeking a strong actor with great comedic timing. Age Range: 45 – 60.

River City Townspeople: Adult Characters of all ages. All townspeople are involved in crowd scenes and the large group numbers. Seeking diverse actors with strong singing voices. Please note: the Traveling Salesmen (a group at the beginning of the show) will be made up of people from the town, including those in the Barbershop Quartet.

River City Kids: Seeking youth that sing and move well, that will ultimately make up the “band” that Harold creates. Seeking about eight young people, Ages 6 – 12.