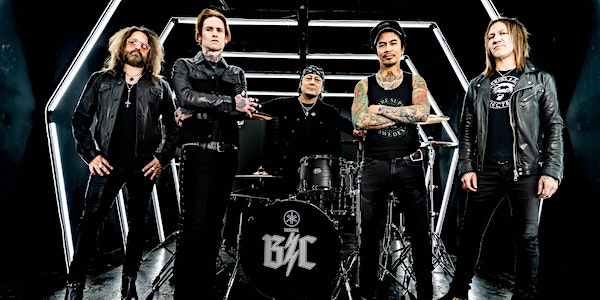 Part of the Concerts collection
by Oceanview Production Studios

BAR & FOOD TRUCKS AT ALL EVENTS!

Under 18 Must Be Accompanied by a Paying Adult.

Buckcherry is unique, complex, simple, passionate, explosive, original, and always a good time. BC has been my love, my pain, my passion, and I’m so proud of what we have accomplished. I never knew when I started this that dedicating myself to music would be taking on so much responsibility. For a guy who never thought he was going to live past 30 this has been an incredible journey. Our ninth record HELLBOUND marks 22 years since our debut self-titled release and what an amazing roller coaster we have been on. From hit songs to platinum and gold records and millions of fans worldwide – all during a time period when traditional sounding hard rock bands didn’t exist – except for Buckcherry. We beat the odds and built our reputation on the live shows, and our “one of a kind” approach to every opportunity.

When the pandemic hit, we had to shift gears like everyone else and it was anything but comfortable. The good news is when this band is backed up against the wall, we produce our best music. HELLBOUND reflects just that. Teaming up with Marti Fredrickson again was so inspiring. He really brings out the best of us and becomes the sixth band member when we are together. There is this mutual respect and passion going on that makes it effortless and fun.

There was so much going on in the world that it was easy to find subject matter for song writing. Songs like BARRICADE and JUNK reflect that, but I also was reminiscing about the moment when I “sold my soul to rock n’ roll”. I will never forget it. It was the very first performance at a house party in Orange County, CA. I knew in that moment that there was no looking back, and no “plan B”. It was only victory or death. The title track HELLBOUND reflects that very moment and is one of my favorite tracks. Part of what I loved about rock records growing up was the dynamics from song to song, you had mid-tempo songs, ballads, and rockers and HELLBOUND is a great reflection of that. Songs like NO MORE LIES, AIN’T WASTING NO MORE TIME, and THE WAY really capture the depth and emotion of not only the world situation but also the personal struggle. Then you must have those quintessential Buckcherry tracks like SO HOT, 5-4-3-2-1, HERE I COME and GUN that I can see our longtime fans really appreciating.

Through adversity Buckcherry has had its greatest moments and we are having one right now with HELLBOUND I hope u enjoy it, and we will see you at the rock show!!

Fusing big guitar riffs, pop hooks, fast tempos, and an attitude that sways between sweet, abrasive and sinister, the Sik Sik Sicks are a pop-punk band from Southern California led by 18-year-old guitarist, vocalist, and songwriter Madeleine Lucas. Inspired by Hole, Blondie, 90s emo and grunge, Madeleine formed the Sik Sik Sicks in 2018. She added 17-year-old Julia Dourthe on lead guitar, 15-year-old Max Lucas on bass, and 16-year-old Jona Bowen Smith on drums. The Siks have played multiple LA venues including The Wiltern, The Rainbow Room, The Whisky-A-Go-Go, Etc. Their first EP “Homecoming Whore” was produced in 2019 by Paul Miner (Death by Stereo, CJ Ramone, The Frights). It’s a healthy dose of teenage angst and dark humor with songs so insanely catchy and provocative- you can’t help but love every single one – which is a feat in today’s generation of disposable punk rock.

FROM THE BACKWOODS TO THE BIG STAGE.

The backwoods of South Carolina isn’t one’s first thought when it comes to a modern shock to the heart of rock n’ roll.

After years of performing under a different name, the group unveiled the Seven Year Witch title in 2018. The band’s reception exploded regionally, as they began to share the stage with the likes of Buckcherry, P.O.D, Tom Keifer’s Cinderella, Pop Evil, Adeltia’s Way and Crobot. With no big city fluff and proudly independent, Seven Year Witch continues to develop a cult-like following.

The band frequents an east coast and Midwest circuit, all the way from Texas to Canada and anywhere in between.

The group has been featured in South Carolina’s most notable festivals (Fall For Greenville, Spittoono, Melting Pot Music Fest) as well as a live performance on Cartoon Network’s [adultswim]. Having battled poverty and the scrutiny of rock n’ roll in the bible belt, Seven Year Witch has cut their teeth and made their own luck.

***ALL TICKETS ARE NON-REFUNDABLE***