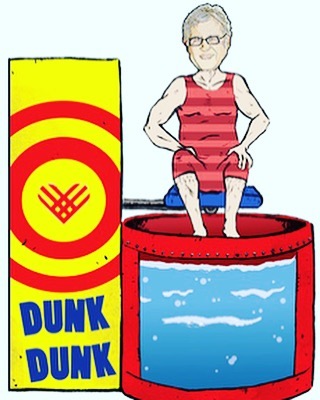 Camarillo, CA – On Wednesday, February 14th at 11:30 am, Casa Pacifica will host its annual employee appreciation town hall in the gymnasium at their main Camarillo campus. The grand finale of the town hall will be the much-anticipated meeting between Casa Pacifica CEO Dr. Steven Elson and the dunk tank.

Dr. Elson’s date with the dunk tank is the result of Casa Pacifica’s successful Giving Tuesday campaign in November which raised more than $15,000 for the nonprofit. For Casa Pacifica’s Giving Tuesday Challenge, two “teams” competed to either “Dunk Steve” or “Save Steve,” whichever team brought in the most donors would win. Ultimately, team “Dunk Steve” was victorious.

Chosen employees and community donors who participated in the Giving Tuesday Challenge will have the honor of throwing the balls that will send Dr. Elson into the water. Longtime Casa Pacifica supporter and owner of Ventura Rental Party Center, Heidi Whitcomb is donating the dunk tank for the festivities. Heidi is a Casa Pacifica board member and was also a donor of the successful Casa Pacifica Giving Tuesday campaign. Press welcome to attend.

Casa Pacifica Centers for Children and Families is a crisis-care and residential treatment facility for abused, neglected, or at-risk children in Ventura and Santa Barbara Counties. The agency is the largest non-profit provider of children’s mental health services in both counties and administers a number of community-based programs designed to strengthen families and keep children in their homes and communities. For more information about Casa Pacifica visit its website www.casapacifica.org or call the Development & Public Relations Department at (805) 445-7800.

Giving Tuesday is an international movement of giving that was started in 2012 by the Belfer Center for Innovation & Social Impact in New York City. Giving Tuesday is celebrated on theTuesday following Thanksgiving and the widely recognized retail shopping sprees Black Friday and Cyber Monday. Since its inception, Giving Tuesday has grown exponentially each year, raising almost 170 million last year alone for organizations all over the world.