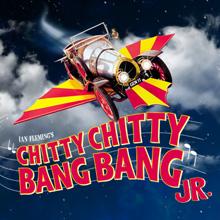 Take a fantastic musical adventure with an out-of-this-world car that flies through the air and sails the seas …    Based on the record-breaking West End production and the beloved film, and featuring an unforgettable score by the Sherman Brothers, CHITTY BANG BANG, JR. follows eccentric inventor Caractacus Potts as he sets about restoring an old race car with the help of his children Jeremy and Jemima. They soon discover the car is magic and has the ability to float and take flight! When the evil Baron Bomburst desires the magic car for himself, the family joins forces with Truly Scrumptious and Grandpa Potts to outwit the dastardly Baron and Baroness and their villainous henchman, the Child Catcher. ~RATED G

The Conejo Players were born in 1958 with a “Let’s start a theatre” attitude, a meager treasury, and a handful of volunteers to build a stage in a barn and put on shows. Within seven years — and a history of some 20-plus productions — that attitude evolved into: “Let’s build a theatre!” With the generosity of the Janss Foundation and a no-interest construction loan, a 126-seat theatre opened at the current S. Moorpark Road location in July 1964.