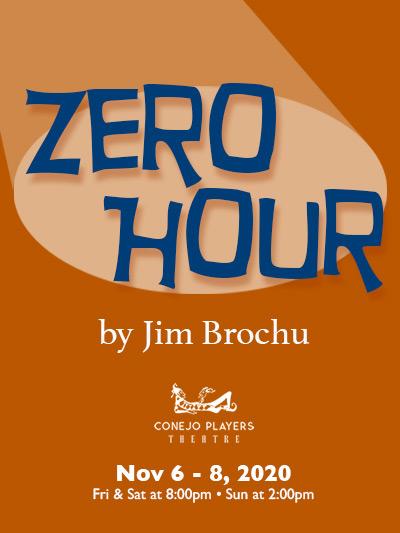 On November 6, 2020, Conejo Players Theatre presents: Zero Hour live streaming from the theater. Jim Brochu, the show’s playwright, will be available live online to answer questions after the last show on November 8th.  In addition, a short video made by Mr. Brochu will be played before each live streaming performance.

It is 1977, and a reporter for the New York Times has been granted access to the art studio and inner sanctum of actor/comedian/artist/madman Zero Mostel, played by John Mederios… and YOU are that reporter. Join the legendary star of The Producers and Fiddler on the Roof as he takes you on a wild ride through the ups and downs of his historic life – from the stage of the famed New York hotspot Cafe Society to the set of any number of great Broadway hits to the halls of Congress, where he was forced to stand up to the destructive ambitions of the House Un-American Activities Committee. And in the end, you may be left asking yourself: what is an artist’s duty? To the truth? To society? To himself?

PERFORMANCES: Live streamed on November 6 and 7 at 8pm, November 8 at 2pm.

TICKETS: Pay what you can tickets are available at www.conejoplayers.org or call the Box Office at 805-495-3715

Jim Brochu is the only actor in America to have won the New York Drama Desk Award, the Washington, DC Helen Hayes Award, the Los Angeles Ovation Award, the South Florida Carbonell Award and the Palm Springs Desert Star Award, all for Best Actor in a Play. Over the past few years, Jim has been leading a double life – both as himself and as the great Zero Mostel in his multi-award-winning play, Zero Hour.  Since its premiere in 2006 Jim has been touring the country with the show, racking up over 600 performances, garnering both unanimous critical raves and major theatrical honors.