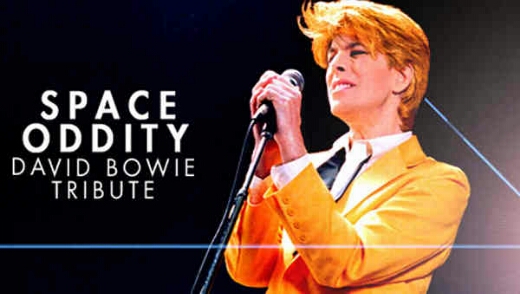 Oxnard, California.  – The City of Oxnard is proud to present a brilliant, live re-creation of rock and roll’s most electrifying performer, the legendary David Bowie.  David Brighton is credited as being the world’s best David Bowie impersonator and tribute performer with one of the most entertaining tribute acts ever to hit the stage.  From stadium-sized Pop/Rock legend to space alien Ziggy Stardust, David Brighton and his all-star band chronicle all of the superstar’s Ch-Ch-Changes in one dazzling stage performance.

The excitement of the legendary ‘original’ Glitter King is in this full scale stage production, complete with flamboyant costume changes, elaborate staging and perfectly emulated vocal stylings. “Modern Love”, “Young Americans”, “Changes”, “Space Oddity”, ”Let’s Dance” and so many more of your favorites will come alive as never before when Space Oddity takes the stage at the Performing Arts and Convention Center in Oxnard for one night only!

Brighton has been performing at live concerts and making radio and television appearances worldwide since 2001. He’s performed on bills with some of the biggest acts the world has known – including: Sir Elton John, Stevie Wonder, Devo, Kenny Loggins, Three Dog Night, Little Richard and Barry Manilow.

For more information and for tickets, please visit: http://www.oxnardperformingarts.com/space-oddity.html