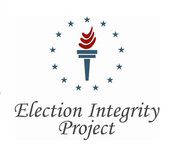 Your Help Needed- Participate in:

Election Observation with a Purpose Workshop

Join/Help the Election Integrity Project Team. You CAN Make a Difference.  Learn HOW…….

“Every legally cast vote accurately counted” is the motto and goal of The Election Integrity Project.  Our mission includes maintaining accurate voter rolls throughout the state, and ensuring the integrity of election conduct by providing extensively trained poll workers, poll observers, and signature verification observers throughout the voting process. The all-volunteer organization, founded in 2010, currently has teams in more than 21 California counties, representing more than 80% of California voters.

The integrity of California elections relies on clean voter rolls and lawfully conducted elections and vote counting. In November 2012, EIP deployed more than 2100 trained poll observers in 21 counties throughout CA. The resulting reports of countless irregularities confirmed a serious need for enhanced training for poll workers, and continued and expanded citizen oversight.

In January 2014, EIP’s voter roll research team submitted to the LA County Registrar a list of over 60,000 likely duplicate and deceased registrants still on the rolls. Less dramatic but still significant irregularities have been found and submitted to other counties. Since California is the ONLY state in the U.S. without a centralized voter registration database as required by the 2002 federal HAVA law, this voter roll chaos poses a serious threat to the integrity of the state’s electoral results.

Need for ballot processing and vote count observers is great. In November 2012, some California precincts reported more votes cast than voters registered. In that election, Californians cast 40% of the entire nation’s provisional ballots, making signature verification oversight vital to ensure that no unlawful vote is counted.

Every California citizen should help in some way. Leaders of citizen action groups as well as any other interested citizens, are invited to attend an hour long workshop to learn more about what’s involved in the EIP observer training, what part you and your membership can play in all aspects of EIP work, and how individuals can become part of an EIP leadership team in your county.

EIP Observation with a Purpose Workshop