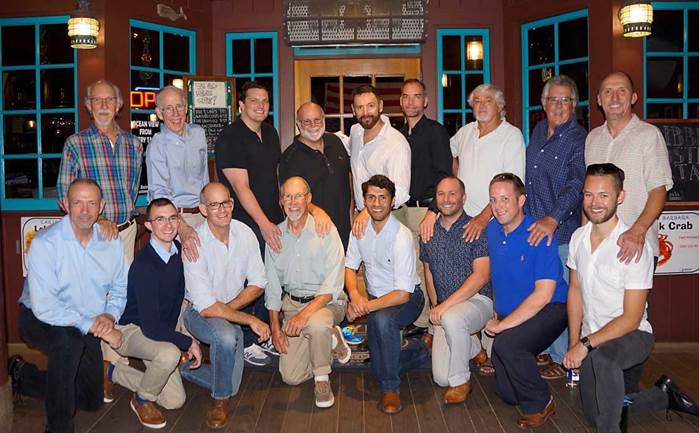 Santa Barbara, Calif., April 12, 2018 – Fratelli, A Men’s Chorus – Santa Barbara’s chorus of gay men and their allies – will present its highly anticipated Spring Concert  –  “We Are One!” – at 7:30 pm on Monday, May 14 at the First United Methodist Church, 305 East Anapamu Street in downtown Santa Barbara.

The theme of this concert, under the direction of Zack Thomas Wilde, will be the need for our nation and world to come together in harmony – which is especially important in this divisive political climate.

Fratelli presents a variety of musical styles — all sung with humor and heart to inspire a sense of well-being and harmony! The talented, enthusiastic singers will showcase an eclectic, exciting repertoire with a theatrical flair that generates resounding responses from its audiences.

A generous dose of choral-ography raises their appeal! Members of the group include parents, professionals and students. This concert will feature the internationally renown, locally-raised operatic tenor Eduardo Villa!

“Over the past 28 months, we’ve grown steadily,” said Mr. Wilde. “In addition to our Holiday and Spring Concerts, we’ve sung at the Vigil for the Montecito Mudslide Victims at the Sunken Garden, for the United Nations Association of Santa Barbara’s September 11th Commemorative Concert, a benefit for Visiting Nurses & Hospice Care of Santa Barbara, the Pacific Pride Festival, the Jewish Film Festival, the UCSB Pride Celebration and at Pacific Pride Foundation’s Sunset at the Canary rooftop fundraiser.”

Fratelli was founded by Mr. Wilde, who grew up in Santa Barbara and went on to a successful career in Europe, New York and San Francisco as a singer, dancer, actor and director.

Tickets for the May 14 Concert can be purchased on the Fratelli website, and will be available at the door from 6:45 pm. Suggested General Admission is $20, and tickets for children and college students with ID are $12. Cash only. Doors will open by 7:10 pm for the 7:30 pm concert.