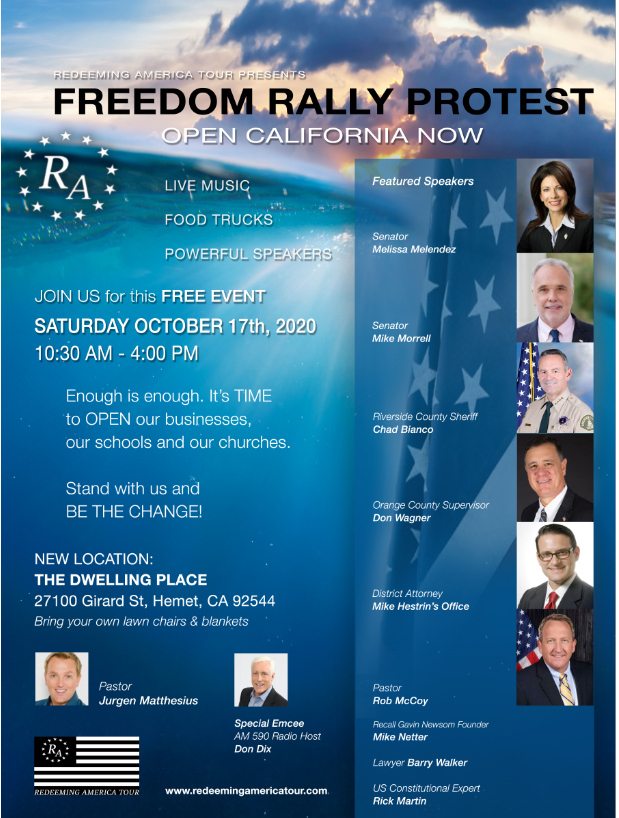 HEMET – Anguish over school, business, and church closures in California, as well as the suspension of constitutional freedoms, has led a statewide group to stage “OPEN CALIFORNIA NOW” in Hemet on Saturday.

“It’s not fair business owners, pastors, and non-profits are all still suffering,” Redeeming America Tour organizers say. “We want to create an event in which we give power to the people.” 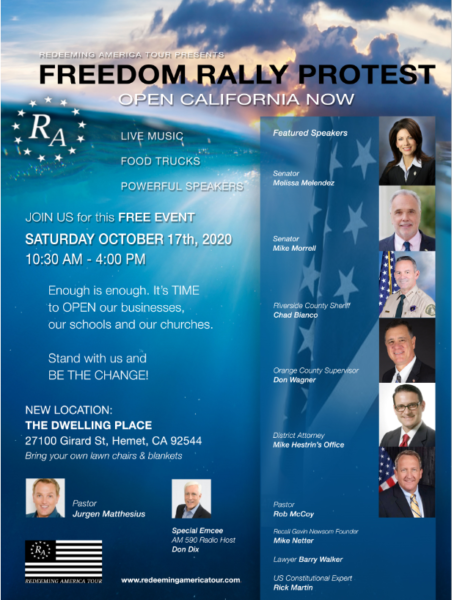 The Redeeming America Tour stops Saturday October 17th at Dwelling Place Church, 27100 Girard Street, from 10:30 a.m. to 4 p.m. The protest is free and open to the public. Its July 18 protest in Murrieta drew thousands. The group plans additional protests before the November election.

“Our whole goal is to re-educate the public on our constitutional rights,” organizers say. “All of them – but especially the First Amendment.”

The protest includes noted Inland Empire, Orange County, San Diego County, and Ventura County speakers and radio personalities discussing America’s liberties. Some of the featured speakers include Senators Melissa Melendez and Mike Morrell, Riverside Sheriff Chad Bianco, OC Supervisor Don Wagner of the Open California Now Petition, Joseph DelGuidice of Riverside County District Attorney’s Office and more. The Dwelling Place serves as a beautiful property to host the event as it holds a wedding venue and lots of space for featured aspects of the protest: live music, food trucks, and something for the kids.

“Disruptive behavior will not be tolerated,” organizers say. “This is a family-friendly event. We want people to relax in their lawn chairs and enjoy the music and the speakers.”

Saturday’s meeting is a “protest” because, under current statewide COVID restrictions, a protest is the only legal means in which large groups can muster.

At the protest, organizers will encourage everyone to sign petitions recalling Gov. Gavin Newsom. Sarah Stephens, one of the organizers and founders says “It is time for us as American citizens to stand up for our rights before they disappear before our eyes. If we gather together and recall Newsom, we can save California and save lives.” The Redeeming America Tour provides speakers from nearly every segment of society: pastors, lawyers, business owners, senators, supervisors, all together coming for one theme: OPEN CALIFORNIA NOW! Stephens believes “if we can open our businesses, schools, and churches, California can come back to life and thousands if not millions of lives will be saved.”  Ree Phoenix, one of the other organizers of the event says, “We owe it to our children to stand up for them and their freedom before it’s gone. If we take a stand now, they will live prosperous lives and will never see America fall to communism. If we don’t speak out now, we may forever be silenced.”

For more information, cut and paste this: https://www.redeemingamericatour.com/