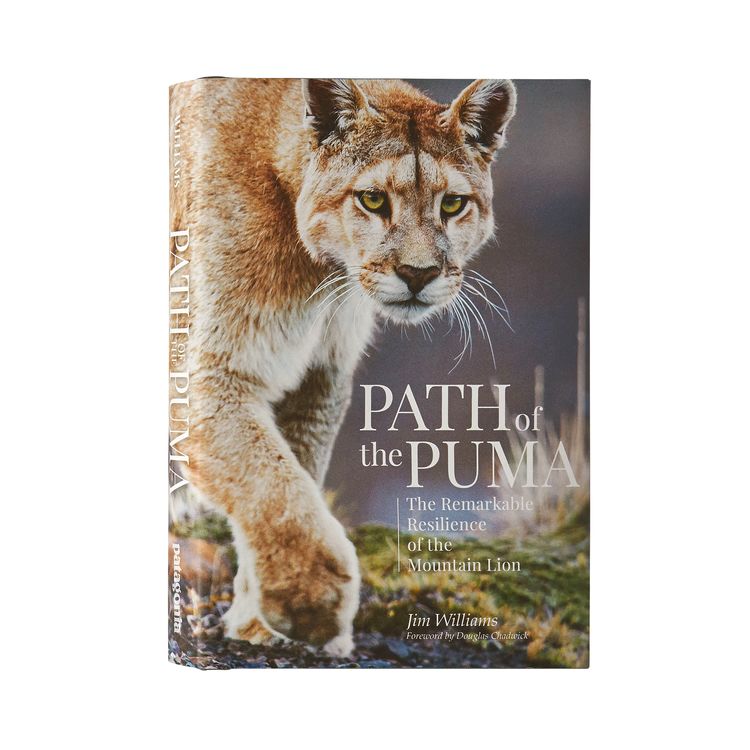 Ventura, Calif.—Join Patagonia and Los Padres ForestWatch for an exhilarating multi-media presentation with Jim Williams, one of the world’s most renowned mountain lion experts. His award-winning book, Path of the Puma: The Remarkable Resilience of the Mountain Lion (Patagonia Books, 2018), celebrates wildlife research and the conservation of big cats from Canada’s southern Yukon Territory to Tierra del Fuego in Argentina and Chile, exploring what makes this cat, the fourth carnivore in the food chain—just ahead of humans—so resilient and resourceful. He shares stories of magical landscapes, remarkable wildlife habitats, and the people who work to protect them.

The free event includes light appetizers and brews from Patagonia Provisions, and a selection of local wines. Path of the Puma will be for sale at the show, and Jim will sign copies. All proceeds benefit ForestWatch’s Room to Roam campaign to protect mountain lions and their habitat in Ventura County and throughout California’s central coast region.

Williams has spent his career working with local communities to conserve mountain lions, bears, wolves, large ungulates and their critical habitats from Montana’s Crown of the Continent ecosystem to the Patagonian wilds of Argentina and Chile. He has worked for Montana’s Department of Fish, Wildlife, and Parks for over 27 years, and with biologists in Patagonia on a variety of wildlife conservation projects.

Two centuries ago, the mountain lion’s range sprawled from coast to coast in North America. However, the big cats were exterminated from most of it by government-supported campaigns that relied heavily on poisoned baits and bounty hunters. As the decades passed and attitudes toward wildlife changed, mountain lion numbers started to rally across the western states. Now, Puma concolor is the most widespread large mammal in the western hemisphere. The resurgence of this apex carnivore through the late twentieth century stands as one of the most remarkable wildlife comebacks in US history.

Yet today, mountain lions throughout the central coast region face an uncertain future. Their survival is challenged by a confusing network of roads and fences, rodenticide poisoning that travels up the food chain, poaching, vehicle mortality, and lethal predator control programs. Local organizations like Los Padres ForestWatch are working with stakeholders to reduce these conflicts and to secure a safe future for mountain lions and other iconic wildlife throughout the central coast region.

Path of the Puma applauds the impassioned champions—wildlife advocates, hikers and hunters, anglers and philanthropists, and biologists—who fight and advocate and lobby for the creation of protected lands where wildlife can thrive. Williams highlights the effectiveness of wildlife corridors in Montana—the underpasses, culverts, and bridges that connect habitats for lions, grizzly bears, caribou, wolverine, and other species in the northern Rocky Mountains.

Conservationists and wildlife managers can learn much from mountain lions about the web of biodiversity that is in desperate need of protection. The story of the puma is fascinating for the lessons it can afford the protection of all species in times of dire challenge and decline.

Jim Williams has spent his entire life finding the wild. Jim left the farm country of Iowa and spent his formative years as a young surf bum turned biology student in the Pacific Beach area of San Diego. He did his undergraduate work at San Diego State and Florida State Universities and his graduate studies at Montana State University in Bozeman. Jim is an award-winning, professionally certified wildlife biologist and has been working for Montana Fish, Wildlife and Parks for over 27 years. Jim studied mountain lion ecology for his master’s degree on Montana’s Rocky Mountain Front and has been working on mountain lion and other wildlife conservation issues in various roles ever since. He has been working with biologists in Chile and Argentina on a variety of wildlife conservation projects. Jim and his wife Melora live and work in Montana’s Flathead Valley just west of Glacier National Park.

WHAT:              Path of the Puma: An Evening with Jim Williams, a multi-media presentation by renowned mountain lion expert Jim Williams, light appetizers and beer from Patagonia Provisions, and local wines.

Los Padres ForestWatch is a nonprofit organization working to protect the Los Padres National Forest and other public lands throughout California’s central coast region. Our Room to Roam campaign seeks to ensure a safe future for iconic wildlife by working with landowners, wildlife agencies, scientists, and other stakeholders to reduce conflicts between humans and wild animals.