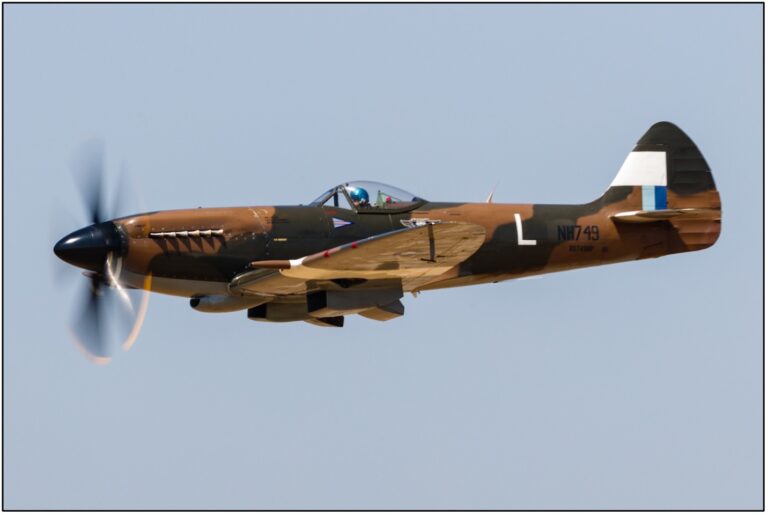 A performance beast! That’s what seasoned Spitfire pilots called the Griffon-powered Mark XIV. With a top speed 100 miles per hour faster than earlier Marks and sporting 50 caliber and 20-millimeter guns, the Mark XIV kept the Spitfire at the forefront of World War II fighter performance and lethality.

On Saturday, September 10th, starting at 11:00 AM, the Commemorative Air Force Southern California Wing at the Camarillo Airport will commemorate the 82nd anniversary of the Battle of Britain with a presentation on the Supermarine Spitfire Mark XIV. Weather, operations, and maintenance permitting, the Spitfire Mark XIV will also perform a demo flight. Come experience Living History!

About the CAF Southern California Wing:
The CAF Southern California Wing is a volunteer organization with members from many different backgrounds. The wing is dedicated to preserving the history of WWII aircraft for generations to come. This CAF location is assigned 12 authentic military aircraft that are maintained and operated by their volunteers. In addition to flying aircraft, the wing also has a wide-ranging collection of World War II artifacts displayed in a Hangar Museum. Due to COVID restrictions, their opening hours are Friday and Saturday, 10 AM to 4 PM, and Sunday, 12 PM to 4 PM. They are closed on Monday-Thursday and some holidays. The newly expanded wing at over 55,000 square feet includes three hangar complexes to house
their museum, flying aircraft, warbird restorations, and gift shop.

About the Commemorative Air Force:

The Commemorative Air Force (CAF) is the world’s largest flying military aircraft museum. For more than 60 years, the CAF has been dedicated to Honoring American Military Aviation through flight, exhibition, education, and remembrance. Fulfilling its mission, the organization maintains airplanes in flying condition – take the airplanes to the people to experience firsthand the aircraft’s sight and sound in flight. The CAF is a non-profit educational association with more than 11,000 members and a fleet of 165
vintage military aircraft distributed throughout the U.S. For more information, visit
www.CommemorativeAirForce.org.