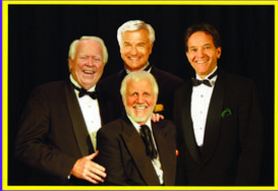 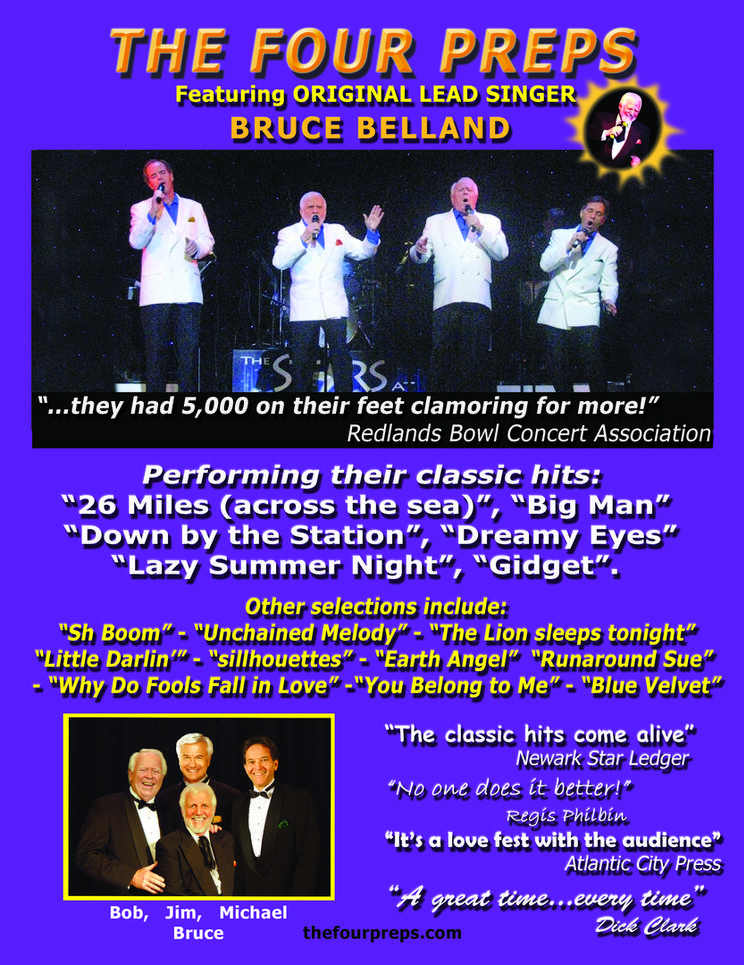 available at the door, Cash,Check or Credit Card

Tickets available at the California Welcome Center Located in the Collections  RiverPark or: http://www.oxnardcca.com/

The sound of any great vocal group is ultimately defined by the voice of its Lead Singer. In the case of THE FOUR PREPS, that voice belongs to BRUCE BELLAND who Co-founded the Preps in 1954 while still in high school and has been their front man ever since. Bruce is the only original member heard on every Four Preps track ever recorded.

Over five decades he’s become what one critic called “that rare creature – an Original Lead Singer from the Fab. 50’s who can still bring audiences to their feet.”

It all began in the Fall of 1954 when 35 girls and not one boy showed up to audition for the annual Hollywood High student talent show. The next day the school bulletin pleaded for “any guys out there who can do anything” and a show business tale of triumph began.

After stealing the show with choice hits by their idols, The Crew Cuts and The Four Lads, they quickly found themselves in demand for every kind of event imaginable.

“We didn’t turn anything down”, Bruce remembers. “We once performed on the back of a flatbed truck for the opening of a parking lot. They paid us $75.00; enough to buy gas and our first matching sport coats. We were totally stoked.”

In 1956 legendary Capitol Records Producer Voyle Gilmore, who recorded stars like Judy Garland, Frank Sinatra and Louie Prima & Keely Smith, heard a tape of a live performance by the Preps and signed them to a long term recording contract. At the time the Preps were the youngest act ever to sign with a major record label. (In an article about their signing, Variety dubbed them “Capitol’s jolly juveniles”.)

They quickly became a favorite of the nation’s disc jockeys and soon their voices blanketed the airwaves. As 1957 began, Cashbox honored them as “the most promising Newcomer of the Year.” and critics began to praise their distinctive sound – and Bruce’s Lead – as “fresh”, “clean”, “bracing”, “warm” and “rich” which inspired Capitol to renew their contract for a second year while searching for that elusive hit record.

Their first national television exposure came on “The Adventures of Ozzie and Harriett” playing singing fraternity brothers of their former HHS classmate Ricky Nelson. That led to their first national tour with Nelson which began the same week LIFE magazine coined the term “Teen Idol” under Rick’s picture on its cover. That SOLD OUT tour created a publicity tsunami for the four talented newcomers.

Shortly after the boys returned to Hollywood, “26 Miles” (written by Bruce and Glen) hit the airwaves and their young lives were changed forever. That million-selling song (9 million at last count) about the “island of romance” became what Dick Clark called “the first surfer hit” and took the Pop world by storm. (In their recent biographies, both Jimmy Buffett and Brian Wilson cite that Preps classic as their enduring teenage influence).