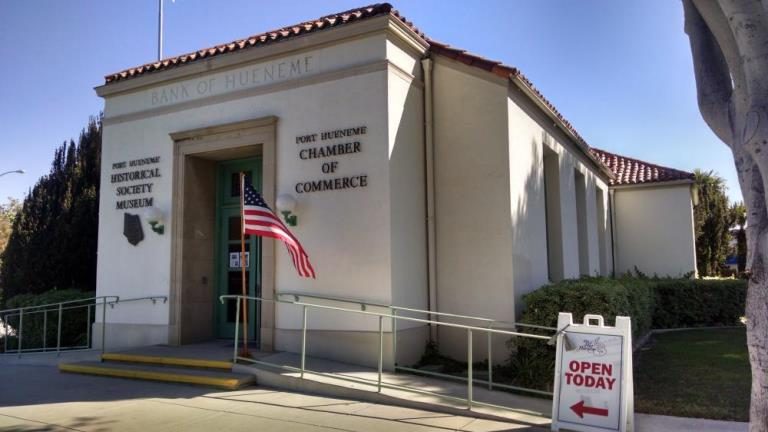 The current featured exhibit at the Museum is the 1948 Incorporation of Port Hueneme coinciding with the 70th Birthday of the City.

Other Museum sponsored events include the monthly Historic Port Tour on the third Friday of each month.  Also offered on a quarterly basis (Next is April 20, 2019), the Museum and Port provide transportation to the Lighthouse for visitors who cannot make the approximately one-mile round trip walk to Lighthouse.

“The Day the Vikings Arrived in America”

at Museum (corner of Port Hueneme Rd and Market St.)

Wayne Dey, who grew up in a small town in Minnesota, learned firsthand about two pieces of evidence that seem to support the theory that Vikings sailed to North America during the 14th Century.

The first piece of evidence is the Kensington Runestone, a 202-pound slab of greywacke covered in runes or carved words on its face and side.  The rune inscription purports to be a record left behind by Scandinavian explorers that has been internally dated to the year 1362.  Olof Ohman, a Swedish immigrant, said that he found the stone late in 1898 while he was clearing land recently acquired of the largely rural township of Solem, Minnesota.  He decided to name the runestone after Kensington, the nearest big settlement in Minnesota.  A long, drawn-out debate on the runestone’s authenticity is still going on.

The second piece of evidence is the 76-foot-long exact replica of a Viking dragon ship built by Robert Asp, a junior high school guidance counselor, who just couldn’t let go of the idea that Norsemen set foot in North America long before any Europeans.  He planned to prove it by sailing such a ship from Duluth to Norway.  In order to realize his goal, he studied both Viking history and ship design before hand-building the “Hjemkomst” in a potato warehouse. The seaworthy replica was modeled after a 9th Century burial ship pulled from a funerary mound in Norway.

Asp managed to sail his completed dragon ship on Lake Superior, but he died of leukemia in 1980 before completing his bucket list dream. Two years later, family members and friends proved the ship could go the distance by sailing the “Hjemkomst” from Duluth to Bergen, Norway in 72 days.  The ship now resides at the Heritage-Hjemkomst Interpretive Center in Moorhead, Minnesota.