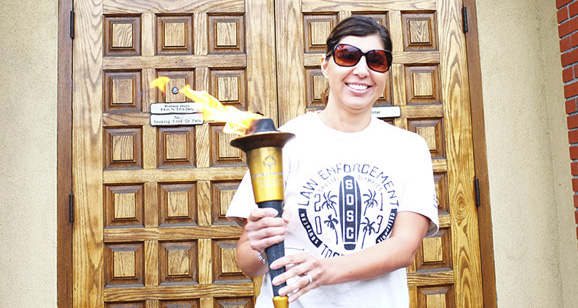 At 8:00 am, Ventura Police Officers and Civilian Personnel,  City of Ventura Employees, Department of Alcoholic Beverage Control Agents, Mile 26 Sports Ventura Running Club and Special Olympics Athletes, will meet at the steps of Ventura City Hall and carry the Special Olympics’ Torch, also known as the Flame of Hope, through the streets of Ventura.  Community members are encouraged to come out and cheer on the participants as the Flame of Hope makes its way through Ventura.

The Special Olympics Southern California LETR is comprised of nine different “legs” ranging from San Luis Obispo to the California-Mexico border. Legs are run in conjunction with various members of law enforcement agencies from throughout the region and Special Olympic Athletes. All legs will ultimately meet at the California State University at Long Beach (CSULB) as the Flame of Hope enters the stadium and the cauldron is lit to mark the opening ceremonies beginning at 10:00 a.m. on Saturday, June 9th.  The games will take place on June 9 and 10 at CSULB.

*Best photo locations: Ventura City Hall at beginning of run, Target at 4200 E. Main Street (One Special Olympian works at Target and Target employees come out with banners and signs to cheer on the team as they pass by the business) and the hand off to Oxnard PD on Ventura Road.