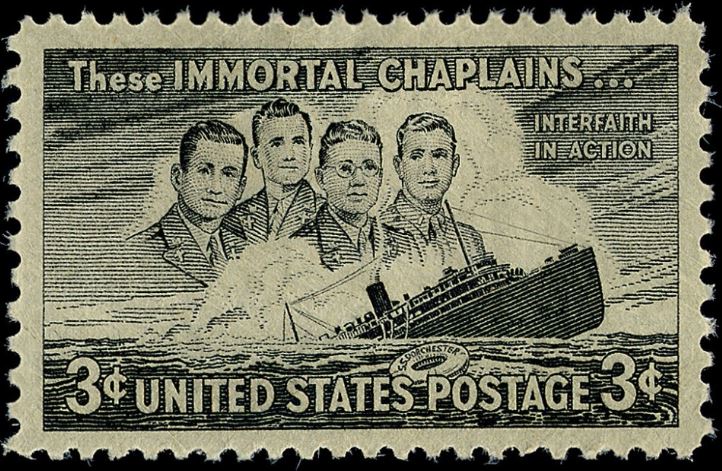 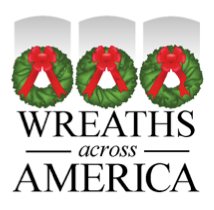 On Wednesday, Feb. 3rd, Wreaths Across America remembers the 78th anniversary of the sinking of the U.S.A.T. Dorchester

COLUMBIA FALLS, Maine – Tuesday, Jan., 26, 2021 – On Wednesday, Feb. 3rd, 2021, Wreaths Across America will honor the American heroes known as “The Four Chaplains” with a special Facebook live event at 12pm EST, from the Balsam Valley Chapel and tip lands located in Downeast Maine.

On January 23, 1943, the U.S.A.T. Dorchester left New York harbor bound for Greenland carrying over 900 officers, servicemen and civilian workers. The ship was a coastal passenger steamship requisitioned and operated by the War Shipping Administration (WSA) for wartime use as a troop ship. The ship was transiting the Labrador Sea when it was torpedoed by a German U-boat (U-233) on February 3, 1943. The ship sank and 675 people on board lost their lives. Amidst the chaos to save 230 lives four chaplains guided soldiers trapped below deck to escape hatches and gave away their life jackets to save others on that fateful day. When the chaplains had done all they could, they linked arms to pray and sing hymns as the Dorchester slipped beneath the waves.

In this ceremony, participants will hear messages and stories about Lt. George L. Fox (Methodist) from Pennsylvania, Lt. Alexander D. Goode (Jewish) from New York, Lt. Clark V. Poling (Dutch Reformed) from ohio and Lt. John P. Washington (Roman Catholic) from New Jersey, “The Four Chaplains.” As well as remembrances for the crew of the U.S.A.T. Dorchester and African American Coast Guardsman Charles Walter David Jr. From New York, who jumped into icy Greenland waters, from a nearby rescue ship, to save two men from drowning and then continuing to help rescue a total of 93 survivors from life-boats. After his heroic acts, 54 days later Charles Walter David Jr., succumbed to pneumonia stemming from those icy waters. Today there is a USCGC Sentinel class cutter named the Charles David Jr. in his honor and is homeported in Key West, Florida

At the close of this ceremony, there will be a remembrance tree tour of the Four Chaplains section of the Wreaths Across America tip land, where replica dog tags hang on live balsam trees in honor of their lives, duty and commitment to all of these American Heroes.

To learn more about “The Four Chaplains” view this video: https://www.youtube.com/watch?v=ym2y89TE9MA&t=184s 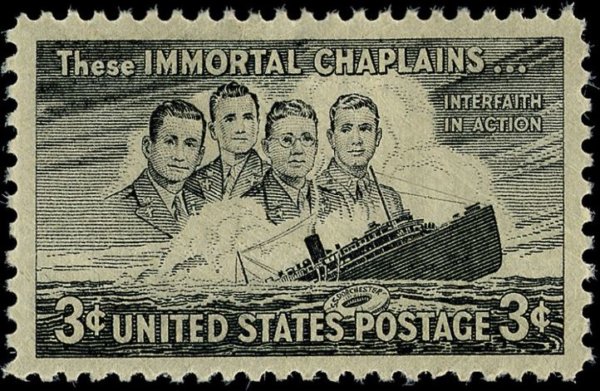 To learn more and to download pictures of the Four Chaplains and the U.S.A.T. Dorchester go here: https://armyhistory.org/no-greater-glory-the-four-chaplains-and-the-sinking-of-the-usat-dorchester/

Four Chaplains remembrance on the WAA Tip-land in Maine

You can sponsor a wreath for $15 at https://www.wreathsacrossamerica.org.  Each sponsorship goes toward a fresh balsam veteran’s wreath that will be placed on the headstone of an American hero as we endeavor to honor all veterans laid to rest on Saturday, December 18, 2021, as part of National Wreaths Across America Day.

Wreaths Across America is a 501(c)(3) nonprofit organization founded to continue and expand the annual wreath-laying ceremony at Arlington National Cemetery begun by Maine businessman Morrill Worcester in 1992. The organization’s mission – Remember, Honor, Teach – is carried out in part each year by coordinating wreath-laying ceremonies in December at Arlington, as well as at thousands of veterans’ cemeteries and other locations in all 50 states and beyond.