After weeks of setbacks in the insolvent company’s attempt to liquidate its assets and repay creditors, China Evergrande finally had some success in raising capital when it sold two of its private jets for more than $50 million last month; according to the WSJ the money from the sale was used to pay a foreign debt coupon and helped avert a default on its US dollar debt.

According to WSJ sources, American aircraft investors bought the planes, both of which were Gulfstream G650 jets. The sales closed in October, the same month that Evergrande made two overdue bond-coupon payments shortly before 30-day grace periods on them expired. 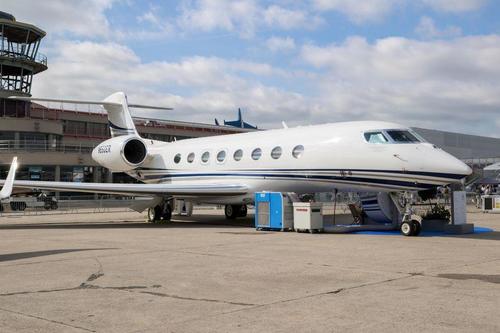 China Evergrande recently sold a Gulfstream G650ER jet similar to this one.

After the sale, the Shenzhen-based Evergrande likely has at least two more jets it can use to repay debt: according to online records, the company had at least four jets recently and has one more on order. The property developer’s private jet fleet is the result of founder and chairman, Hui Ka Yan, splurge on luxury jets during the company’s heyday which he used to fly himself, Evergrande executives and others around the world. Other Chinese conglomerates like the formerly highflying HNA Group also boasted flashy private jets with luxurious interiors. They are all now bankrupt.

Pre-pandemic flight records for one of Evergrande’s Gulfstream jets show it flew regularly from Guangzhou and Hong Kong to other major cities including London, Los Angeles and Boston. It also made trips to the islands of Saipan and Bali. The company sold that plane, a five-year-old G650ER ultralong-range aircraft that can seat 15 passengers, for less than $40 million in late October, the people familiar with the matter said. The buyer was Earth Air, a company backed by private aviation investors that operates out of Los Angeles and owns two similar Gulfstream jets.

Alex Joya, president and partner at Earth Air, confirmed to the WSJ that his company recently purchased the plane but said he couldn’t disclose details of the transaction.

The other Gulfstream offloaded by Evergrande was an older jet that sold for roughly $15 million, according to a person familiar with the matter. The buyer was Aviation Sales Associates, which operates out of California. A company representative declined to comment on the transaction.

The two Gulfstream jets Evergrande recently sold were its smaller aircraft. The company is currently seeking a buyer for a much larger Airbus ACJ330 wide-body jet, according to an advertisement for it. That plane, for which Evergrande paid more than $220 million a few years ago, is sitting at Hong Kong International Airport, according to a person familiar with the matter. It has a highly customized “VVIP cabin interior” that includes a circular dining table surrounded by seats that can be converted into beds for sleeping, in addition to shower facilities, an entertainment lounge and bedrooms. 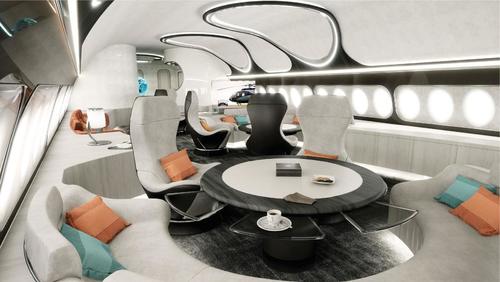 It was designed to transport up to 40 passengers and 12 crew members. Commercial airlines often use Airbus A330 jets to fly more than 250 passengers.

And since Evergrande faces billions in upcoming coupon and maturity payments, the airplane will soon have a new owner.

It’s not just private jets that marked the peak of Evergrande’s debt-fueled lunacy: the company expanded aggressively for years (as it raked up some $300 billion in debt), buying hundreds of parcels of land across China, building giant high-rise residential developments and selling many apartments years before they were completed. Evergrande also branched out into theme parks, healthcare services and electric vehicles. It bought a professional soccer team in its home province of Guangdong.

The spree left the Chinese property giant owing about $20 billion in outstanding dollar bonds (and far more domestically). Payments on several bonds are coming due over the next week. 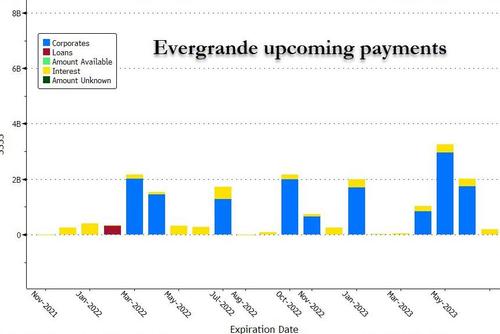 The company used proceeds from the sale of the two plans to avoid a default by making an interest payment in the last minute. On Sept. 23, Evergrande missed $83.5 million in coupon payments on about $2 billion in dollar-denominated bonds. Days later, it missed another $45 million coupon payment on $951 million in bonds. It then made good on both payments in late October.