SPOFFORD, Texas — Illegal migrants crossing the border to evade apprehension frequently cause damage to property just north of the southern border, brazenly breaking into properties on ranches, causing some in the community to live in fear.

Brad Whitaker took the Daily Caller News Foundation to a property he’s managed for 21 years, located a few dozen miles from the nearest border town. During the past several years, Whitaker has felt the effects of the border surge with his property sustaining costly damage that has compromised his safety and the safety of hunters who frequent the ranch.

Whitaker was armed with a gun because he said as trespassing becomes more frequent, he never knows what to expect and sees the risks grow by the day.

“They caught a convicted felon on the ranch here in November and then they just caught him again last night because he goes back and comes back,” Whitaker told the DCNF, adding that “Everybody is just so fed up with it and we don’t know what to do.”

“Since this [President Joe Biden’s] administration has taken over, it has just been a complete nightmare,” he said. “The holes in the fences that they cut, they come in, they’re tearing up the houses, my skinning shed out there, I can’t keep knives in it because they steal them.”

He added: “They’re pulling batteries out of the deer feeders and tearing up, pulling off the solar panels to charge their phones with. And the trash, it is just unbelievable how much trash.”

When he drives around the ranch, he “could end up with a whole bucket full of trash that they’ve left. They have no consideration for anything,” Whitaker said.

The property extends for miles, marked intermittently by shooting ranges equipped with bunkers, a lake, and cozy homes. It’s a popular spot for deer hunting, but Whitaker fears that may not last long.

“People are afraid to come out here, and when they do come out here, they come out here to have a good time and they want to shoot nice trophy animals,” Whitaker said. “Well, you can’t hardly do that when you’ve got 6, 8, 10 people walking up where you’re supposed to be shooting.”

Whitaker said he now has to “clear the houses” on the ranch everyday because in the past, migrants have broken into them and “trashed” them.

“A couple of incidences happened … We’ve got another house on the place and I’m always looking for tracks and looking for things that aren’t right. Well, I come up to the house there and I’m thinking it’s not right, so I go up to the door and the door is locked. I don’t lock any doors here because if I do, they kick them down and break the windows. They’re gonna get in one way or the other,” Whitaker said.

A glass top stove in one of the houses was ruined when the migrants cooked a steak they found in his freezer directly on the stovetop without a pan, Whitaker said.

Some migrants that have broken in, according to Whitaker, have gone to the restroom on furniture and in showers inside the houses.

“In the other house, they took a sheet off the bed. They slept in it, but they pushed it up against the window so they could see if somebody pulled up. And took the sheet and took off with it, took some of the food, which, you know, no big deal.”

Because the ranch is located on arid land, tanks that pump water from a nearby well are the only water source. Whitaker showed the DCNF some of the tanks on the property that migrants had tampered with to get water, letting a lot of it spill out and go to waste.

“When these tanks run out of water, I’ve got pressure pumps inside here. If they end up running without water, it burns the pump up. That’s another $1,200, $1,500 dollars on just the pumps.”

In order to breach the ranch, migrants cut the expensive and hard wire fence, which costs thousands of dollars and hours for Whitaker to repair.

Along the fence, Whitaker said he often finds trash and lots of cooked food and groceries.

“I’ve pulled up and I have found I don’t know how many pounds of ham in packages, loaves of bread, all kind of energy drinks, that’s a big thing that they have out here,” Whitaker said. “Somebody’s dropping stuff off on the fence line.” 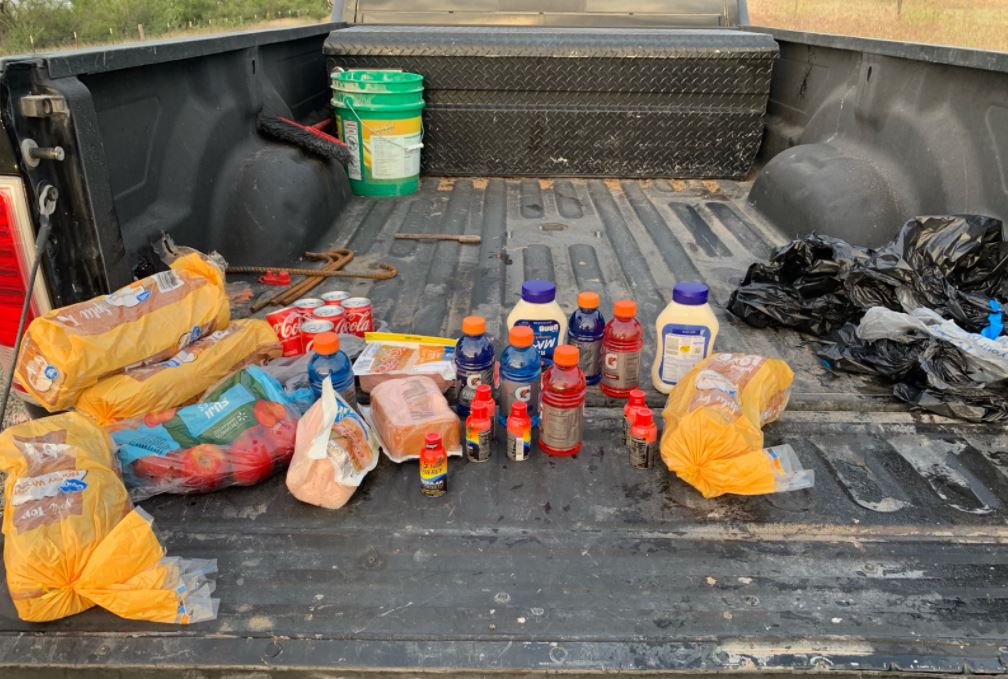 “It’s a constant deal and people are dropping food off all the time. I’ve come into the inside of one of my gates and there has been Dominos pizza boxes, rotisserie chicken,” he said.

“They brought a Rubbermaid. You know, somebody put it over the fence for them. I had five pizza boxes and I don’t know how many rotisserie chicken boxes, probably a case and a half of empty Coke cans, water bottles,” Whitaker continued.

Whitaker has been cooperative with the Texas Department of Public Safety’s (DPS) efforts to pursue criminal trespassing charges against illegal migrants entering his property.

“I used to be able to call Border Patrol before they got their hands tied and their feet tied and everything else to where they can’t do anything. I’ve called DPS and their response time has been so great,” Whitaker said.

He added: “I mean, I can call them and I’ve had them here in less than 10 minutes. And they come with a posse and usually end up catching them. You know, they bring their drones out here and fly them around. If I’ve seen them on the ranch, most of the time, they’ll catch them. If I just see the signs, they could be an hour or two hours ahead of them.”

Whitaker said the problem is going to worsen if something drastic isn’t done to counter the border crisis.

“I would think activate the military or start sending these people back, instead of putting them on an airplane and sending them north.” Whitaker said. “They’re gonna be somebody else’s problem at some point in time.”

DPS sergeant Juan Maldonado showed the DCNF a train depot in Whitaker’s town that is notorious for migrant activity and human smuggling. 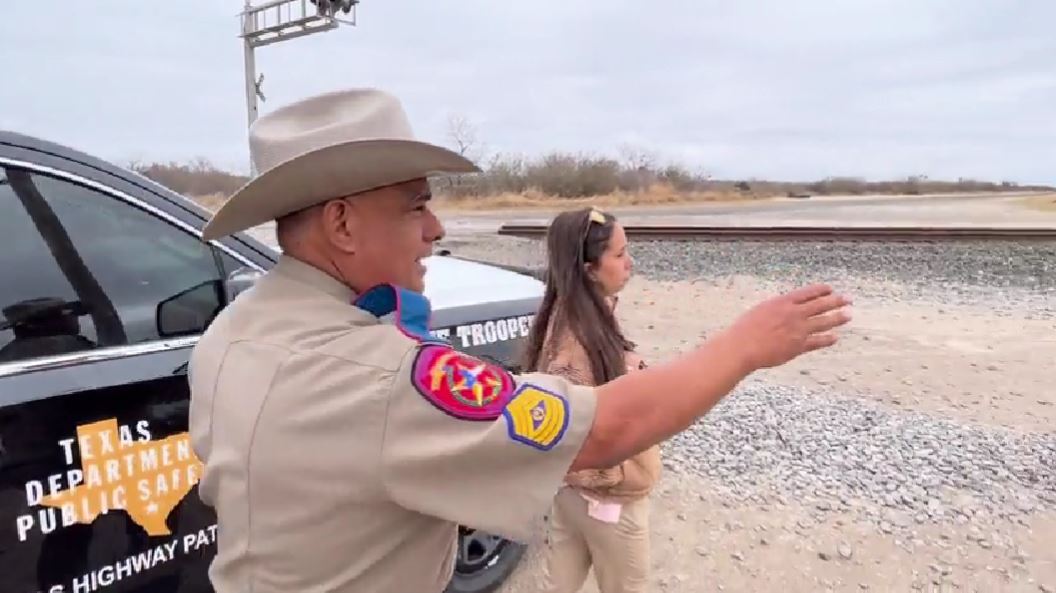 “The train stops and as the train’s stopping basically undocumented aliens start to come out of the train and just start running towards private property,” Maldonado explained. “At one time we had a group out here, our team, and we were trying to bring them together, capture them, and turn them over to Border Patrol.”

Maldonado emphasized that the migrants passing through are themselves risking death.

“I can tell you from past experiences, the dangers are extremely high,” he said. “Number one, if the temperatures are pretty high. You know, they can die on the trains. We’ve had several fatalities where they jump from the trains, they get caught, they get run over by the trains, by the wheels.”

Texas Governor Greg Abbott surged DPS troopers to the border in March 2021 as part of Operation Lone Star, the state’s response to the border crisis.

“Our numbers have increased since we started the operation in March last year,” Maldonado said, adding that human smuggling and smuggling of children as young as 6 years old has contributed to the heightened response.

DPS has been able to intercept some of the smuggling, he said.

“We have great assets technology that our department has provided for us. We have drones, we’re able to fly the drones at night time, we have specialized people that fly drones. Of course we have our criminal division as well, Texas Rangers that assist us, and any asset that we can use. And we’ll adapt to the criminal activity that’s along the border, we’re gonna adapt to it as long as we have the support of the community.”

A member of the National Guard who spoke to the DCNF in an area of the border in Del Rio, Texas that was previously frequented by migrants crossing and seeking apprehension described finding more migrants now trying to evade arrest, many of them often sitting for hours in the brush to avoid being seen.

“I’ve seen a lot more Mexicans coming in now. I guess ’cause of the weather and it’s easier for them to come in,” the guardsman told said as his colleagues echoed his statements. Dozens of migrants used to cross at that spot each day that were delighted to see agents, and would sometimes hug them out of gratitude.

The guardsman also attributed the laws that have gone into effect in Mexico as a deterrent for migrants that used to cross more frequently in the Del Rio area.

“Since the law came in effect in Mexico, we haven’t seen Venezuelans, Cubans anymore. ‘Cause that’s what we used to get the most.”

Mexico began requiring that Venezuelans obtain travel visas to pass through on their way to the U.S., and countries on the way to Mexico have made similar visa requirements for Cubans.

“I haven’t seen as many Mexicans until now,” the guardsman said, adding that it’s mostly adults trying to get away.

“I do see people sometimes going uphill and just scouting around the area,” he said. “I just saw a group of five as they tried to cross over and they saw me and they took off.”