Attorney General Merrick Garland refused to comment on video clips played for him during a House hearing last week by Rep. Thomas Massie, R-Ky., showing a man the congressman suspected was an informant planted by the FBI to urge Trump supporters to breach the Capitol on Jan. 6.

Massie didn’t mention the man’s name, but he long has been identified as Ray Epps, a U.S. Marine veteran from Arizona.

Epps confirmed his presence at the U.S. Capitol on Jan. 6 in a story published a week later by the Arizona Republic, the leading daily newspaper in Phoenix. And more importantly, he confirmed that he was the man shown in videos urging Trump supporters to enter the Capitol.

Meanwhile, the Washington Post published a story Sunday titled “D.C.’s Willard hotel served as ‘command center’ for Trump team” during its effort to contest the results of 2020 election, suggesting the posh hotel was a “war room” for coordinating a plot to overturn the election. But as Powerline blogger Paul Mirengoff pointed out, the Post found that no illegality or impropriety occurred there as “various operatives tried to find evidence of election fraud and tried to persuade members of state legislatures that there was enough evidence of it to challenge the result in their state.”

Garland pressed on ‘federal agents’ at Capitol
In a House hearing last Thursday, Massie questioned Garland about Epps, without naming him. The congressman played video with clips of Epps on Jan. 5 urging protesters to enter the Capitol building the next day and then, on Jan. 6, shepherding crowds through the barriers.

Garland replied, “So, as I said at the outset, one of the norms of the Justice Department is to not comment on pending investigations, and particularly not to comment on particular scenes or particular individuals.”

Massie pressed further, telling the AG he was “hoping today to give you an opportunity to put to rest the concerns that people have that there were federal agents or assets of the federal government present on January 5 and January 6.”

“Can you tell us,” Massie asked, “without talking about particular incidents or particular videos, how many agents or assets of the federal government were present on January 6, whether they agitated to go into the Capitol, and if any of them did?”

Garland again said he would not “comment on an investigation that’s ongoing.”

What happened to Suspect 16?
Epps has never been arrested or charged, Revolver News pointed out. And nearly 10 months after the event, the FBI and Justice Department still refuse to comment on whether he has ever been served a search warrant.

However, at least rank-and-file FBI investigators were interested in Epps, and two days after Jan. 6, his face was on the FBI Capitol Violence Most Wanted List.

In less than three days, Epps was identified as Suspect 16. But for nearly six months, the FBI did nothing with the information. At the same time, Revolver News reported, the bureau was “investigating, arresting, raiding and imprisoning hundreds of completely benign MAGA moms and social media trolls — mostly for minor misdemeanor trespassing charges.”

Then, on July 1, “someone at the FBI quietly and stealthily purged every trace of Ray Epps from the Capitol Riots Most Wanted database.” 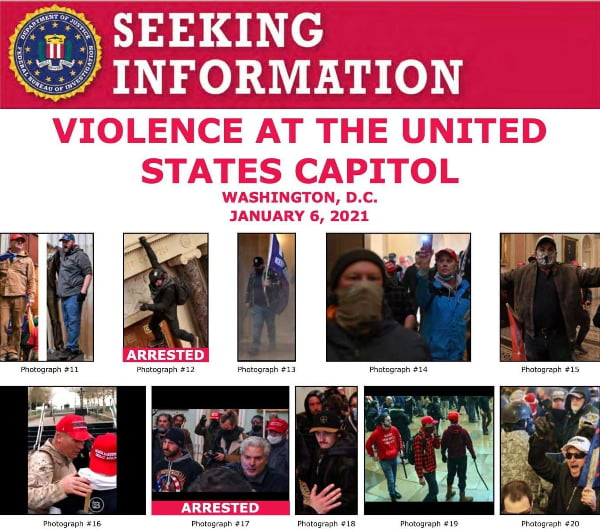 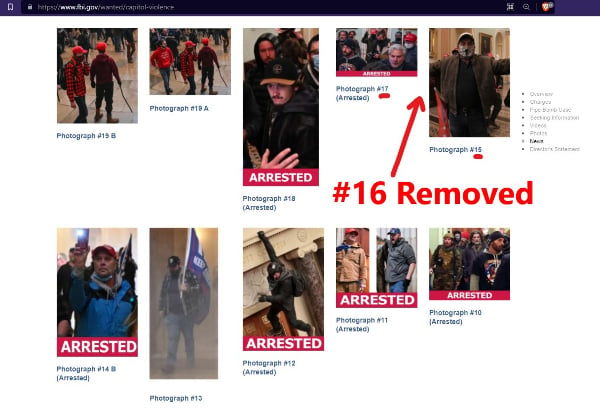 Revolver News believes it’s because the bureau “panicked” after a series of media reports.

Revolver published a June 14 report presenting evidence FBI operatives were embedded within the Proud Boys and Oath Keepers on Jan. 6.

On June 17,  a viral Twitter thread featured video of Epps on Jan. 5 being booed and shouted down by Trump supporters as a suspected federal agent as he urged them to go into the Capitol the next day.

On June 30, the New York Times published an article titled “Inside the Capitol Riot: An Exclusive Video Investigation,” which referenced “widely-circulated videos” of Epps and concluded he “seemed to have acted on his own.”

But the videos showed Epps coordinating with others, including a still-unindicted, still FBI Most Wanted ex-Marine commando nicknamed “MaroonPB,” who is seen antagonizing police officers with a bullhorn.

Also on June 30, one day before Epps disappeared from the FBI Most Wanted list, Revolver published a report showing the extraordinary federal protection given to the founder and leader of the Oath Keepers militia, Stewart Rhodes.

It turns out that in 2011-2012, Epps was the leader of the Oath Keepers’ Arizona chapter, the largest in the country, while Rhodes was the national leader.

Epps can be seen in a video chatting with Rhodes during a march in Arizona.

See the video of Epps and Rhodes: