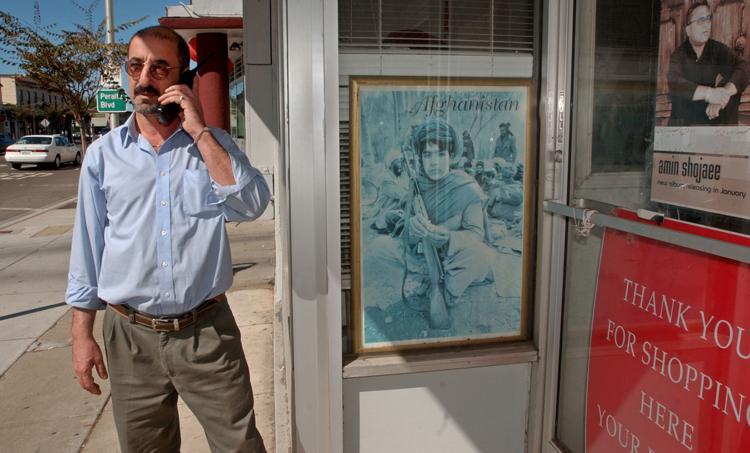 Homayoun Khamosh talks on the telephone with a customer about the Afghan elections outside of his market, Pamir Food Mart, in Little Kabul area of Fremont, Calif., on Saturday, Oct. 9, 2004. Residents of Little Kabul comprise the nation’s largest concentration of Afghan emigres.

(The Center Square) – Afghan refugees looking to resettle in the U.S. are being discouraged from picking California as a destination, despite the state having significant Afghan population centers.

In the days after the U.S. announced it would resettle refugees fleeing a Taliban takeover of Afghanistan, governors across the country made statements welcoming refugees.

“We’re a state of refuge,” California Gov. Gavin Newsom said Aug. 16 during a news conference. “I’m proud of the fact that, over the last decade, California’s taken in more refugees than any other state in America, and I’m proud of the fact a disproportionate number of Afghani refugees are here in Northern California, not just here in the south, but also up in Sacramento County.”

Newsom said the state already was working with nonprofit organizations to “make sure that they feel welcome and celebrated as members of our community.”

As much as the state’s welcome mat is rolled out, refugees working with the U.S. Department of State won’t generally get a federal blessing to make the Golden State their new home.

The department’s Bureau of Consular Affairs listed the cities it said are best suited for refugees to thrive. Despite significant Afghan population centers in Sacramento and Fremont, where one neighborhood is called Little Kabul, no California destinations are on the list of 19 cities.

The bureau said the District of Columbia metro area and some cities in California are “very expensive places to live,” making it difficult to find reasonable housing and employment.

“Any resettlement benefits you receive may not comfortably cover the cost of living in these areas,” the bureau’s resettlement guidance said. “Unless you have close relatives or friends in these areas who are able to provide financial support and housing until you find employment that covers your living expenses, it is best to allow a resettlement agency to choose a suitable location for you.”

California’s cost of living likely is to be a significant hurdle for refugees looking to make the state their home. Refugees receive a $1,100 stipend for three months after arriving in the country. According to RentCafe, the median rent in Fremont is more than $2,400 a month.

“With the recent victories for pro-housing policy in our state legislature, California is finally grappling with five decades of resistance to building more homes in our cities,” said Matthew Lewis, director of communications for California YIMBY, a nonprofit that advocates for policies that would allow more housing availability in California. “Sadly, that won’t help today’s refugees, whether they’re fleeing war in Afghanistan or wildfires right here in the Sierra Nevada.”

Lewis, however, stressed not to count California out.

“The vast majority of Californians want to make it legal to build more affordable homes in our cities, and we’re optimistic that our cities will be more welcoming in the very near future – for refugees, immigrants, Americans seeking opportunity, and for our own children,” he said.

According to the CATO Institute, California is home to an estimated 45% of the nation’s Afghan population.

So Gavin running the State into the ground has a silver lining.