On January 27, 2022, at approximately 6:00 pm, a victim parked their vehicle at a business
located in the 700 block of Ventura Street in the city of Fillmore.

At approximately 6:25 pm the
victim returned and discovered that their vehicle had been burglarized. An unknown suspect(s)
shattered the window of the vehicle and stole a wallet containing credit cards and a laptop
computer. 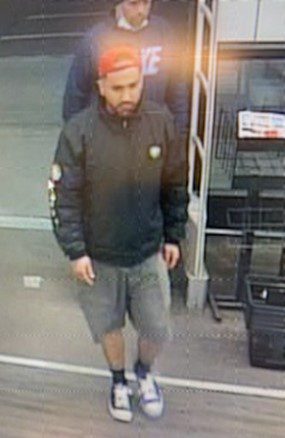 Immediately after this crime, the victim received notification from their bank regarding fraudulent
charges made using the victim’s stolen credit cards at the Von’s grocery store located across the
street from where the vehicle burglary had occurred. Detectives obtained video surveillance of
two suspects responsible for making the fraudulent charges at the grocery store. Photographs of
these two suspects are attached below.

The Fillmore Police Department is asking anyone who may have information pertaining to this
crime or who recognizes these two suspects to call Detective Lemar at the below listed telephone
number. The reporting party may remain anonymous.

The Fillmore Police Department encourages citizens to immediately report suspicious people and
vehicles, and to promptly report any crime they come across by calling 911. The Ventura County
Sheriff’s Office would like to thank members of the public for their on-going support and due
diligence in providing information to assist our agency in solving crimes.

Ventura County Crime Stoppers will pay up to $1,000 reward for information, which leads
to the arrest and criminal complaint against the person(s) responsible for this crime. The
caller may remain anonymous. The call is not recorded. Call Crime Stoppers at 800-222-
TIPS (8477).