Today, the California State Auditor announced that nearly 21,000 Californians applied to serve on the 2020 Citizens Redistricting Commission, of which more than 17,500 are tentatively eligible. The initial application period for the 14 seats closed on Monday, August 19, 2019 at 5:00 p.m.

“We’ve said since the beginning that we were working to form a deep and broad pool of applicants for California’s second Citizens Redistricting Commission,” said California State Auditor Elaine M. Howle, whose office is charged with creating the new Commission. “We are thrilled to report that we met that goal with thousands of diverse applicants—race/ethnicity, geographic, gender, and economic backgrounds. We received nearly 21,000 applicants who are reflective of California’s talent and diversity.”

The application process was open to registered California voters who voted in at least two of the last three general elections and had consistent party affiliation for five years.

Howle continued, “The work of the 2020 Citizens Redistricting Commission safeguards the integrity of California’s elections by giving the power to the people and making sure voters have a voice in selecting their representatives. Now, the tentatively eligible applicants from the initial pool will continue through to the next round of review and fill out the supplemental application. With so many applicants, our Applicant Review Panel has a big job ahead, but we’re up for it.”

“I thank every single Californian who participated in this process and took the time to apply,” said Howle. “We highly encourage all members of the public to continue participating in this important process over the next several months by checking the Shape California’s Future

website for updates and providing online public comment on these applicants so that your voice is heard.”

More information about the supplemental application and the 2020 Citizens Redistricting Commission selection process is available at shapecaliforniasfuture.auditor.ca.gov or by calling (833) 421–7550. You can also follow us on Facebook and Twitter at @ShapeCAFuture for recent updates. 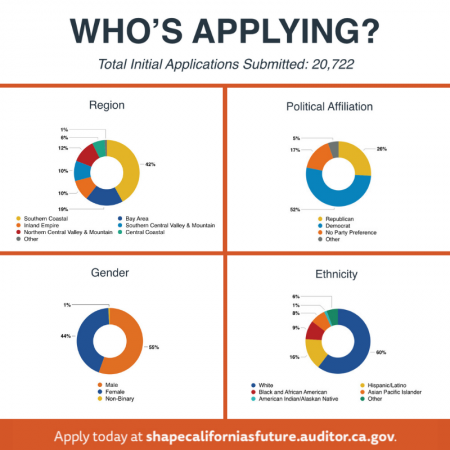 About the 2020 Citizens Redistricting Commission

Every ten years, after the federal government publishes updated census information, California must redraw the boundaries of its Congressional, State Senate, State Assembly, and State Board of Equalization districts.

In 2008, California voters passed the Voters FIRST Act authorizing the creation of an independent Commission comprised of 14 members. The 2020 Commission will include five Democrats, five Republicans, and four who are either registered without, or “independent” of, any political party (decline-to-state or no party preference) or with another party. The Commission is responsible for drawing the lines of each district. The supplemental application period for new Commission members runs from August 21, 2019, through September 20, 2019, and is open to qualifying applicants who submitted an online application during the initial application period.