The Constellation Orion may look very different soon if astronomers are right about the giant star Betelgeuse which marks the starry hunter’s right shoulder.

Betelgeuse was once in among the top 10 brightest stars in the night sky, but since October it’s been dimming so much that it’s no longer even in the top 20, according to The Astronomer’s Telegram. This is remarkable for a star that is 20 times more massive than our sun.

This reduction in brilliance is significant because the dimming of a star often foreshadows an incredibly bright, explosive conclusion to the life of a stellar body in the form of a supernova, according to National Geographic.

If Betelgeuse were to go supernova, it would put on a show for the ages as it collapses into itself and detonates. From earth, this event would be clearly observable, briefly outshining even a full moon in our night sky before going dark forever, reports National Geographic. (RELATED: The PC Speech Police Are Coming For Space Colonies)

“Betelgeuse is living on borrowed time and could explode as a supernova any day now,” Fraser Cain, publisher of Universe Today explained recently on his YouTube channel. However, he also noted that it “might not detonate for another 100,000 years, we just don’t know.”

Sarafina Nance who studies Betelgeuse at the University of California Berkeley agrees that the red giant is slated to explode, but is convinced we’ll have to wait another 100,000 years or so to behold such a spectacle. 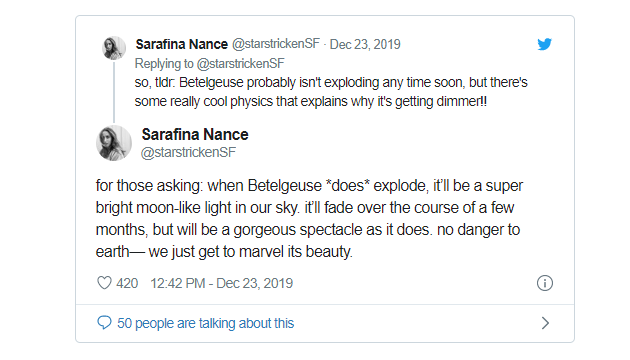 Another possibility is that Betelgeuse has already exploded, but because it takes about 600 years for for its light to reach Earth we won’t know about it until 2620 at the latest, according to National Geographic.

Fortunately, Cain, Nance and others all agree that the eventual demise of Orion’s shoulder poses no danger to Earth.