NEWBURY PARK—”Division occurred within King David’s own household that resulted in a coup attempt,” said Godspeak Pastor Rob McCoy during Sunday in-person services as he focused on Psalm 7 written as a prayer and praise for deliverance from his enemies. King David’s son, Absalom, had “been poorly raised by a great king and a terrible father. (See 2 Samuel 16 and 17).

In Colorado, they passed Proposition 114, the Gray Wolf Reintroduction Initiative which creates a plan to re-introduce and manage gray wolves on designated lands west of the continental divide by the end of 2023. While Proposition 115, the 22-Week Abortion Ban Initiative which prohibited abortions after a fetus reaches 22-weeks gestational age was defeated.

“Whenever there is animal worship there will be child sacrifice,” said English author G.K. Chesterton. “Evil and deception are before our own eyes but where are the churches? We created the monster and decry its existence,” said Pastor McCoy.

“This is a referendum on the Body of Christ for the greatest atrocity in the nation. We cannot (continue to) kill babies. We’ve had the first president to stand in defense of the unborn. He is under siege and the church is silent. The same thing happened in 1863 and 1864 during the Civil War.”

President Abraham Lincoln was not the main speaker during the dedication of the Gettysburg National Cemetery. He gave a speech of only 272 words which became known as the Gettysburg Address and shook the nation. 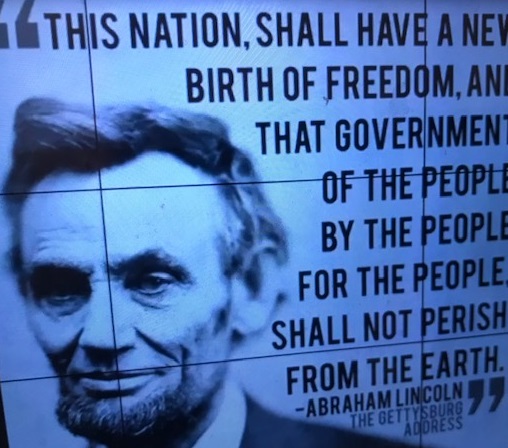 “We need to take an assessment of our lives. How did we get here? We were concerned with things that didn’t matter. We assumed that everything we lived in was going to survive and we didn’t have to participate in government of the people, by the people and for the people.

“It’s a wonderful time to be alive. We can’t have a shallow superficial faith. That is not going to work anymore. You are going to get to see that God is real. If we can’t run with foot soldiers how are we going to keep up with chariots?

“Psalm 7 gives us our why? ‘O Lord my God, in you I put my trust; Save me from all those who persecute me; and deliver me…’I will praise the Lord according to His righteousness, And will sing praise to the name of the Lord Most High.’” (Psalm 7:1, 17)

Is this guy on drugs? Or more to the point, you would have to be on drugs to believe any of this hateful, illogical BS.

But you’ll find out that, in truth, Biden was Satan’s candidate so that he, Harris and the rest of the socialist demons can wreak his havoc upon our nation.

A guy
Reply to  C. Collier

You’re going to have to prove that demonology even exists before I feel threatened by your mythological shenanigans. Are the demons and gods of hinduism real, or just the demons?

Trump was the coup attempt.

Mike Smith
Reply to  A guy

So says a guy whose god is government, and whose politics is religion.

It appears John’s just another bored, unhappy leftist desperate for a man-made cause to advance, hoping young people will think he’s ‘religious.’

The will of God has been revealed. Please don’t sin further and question His Divine wisdom.

Let us pray – Lord, get pastor McCoy to a psychiatrist quickly that he may receive your divine medications that may cure his insane ramblings. Amen