“Following much reflection,” Williams, who was demoted to MSNBC in 2015 after it was revealed he had fabricated stories about covering active war zones, said this week in a statement, “and after 28 years with the company, I have decided to leave NBC upon the completion of my current contract in December.”

The statement adds, “I have been truly blessed. I have been allowed to spend almost half of my life with one company. NBC is a part of me and always will be.” 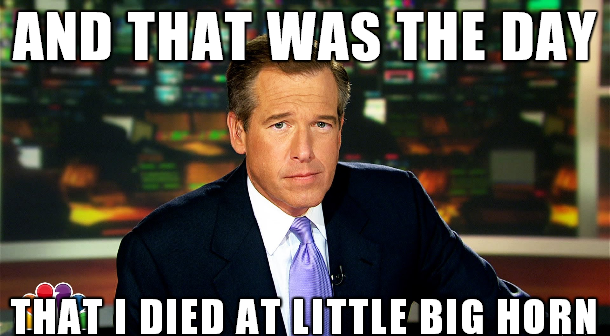 It’s unclear whether Williams intends to retire from journalism altogether or from just NBC.

“This is the end of a chapter and the beginning of another,” he said. “There are many things I want to do, and I’ll pop up again somewhere.”

Indeed, where are their viewers supposed to go now for vacuous, rambling commentary, the latest updates on left-wing Twitter, and semi-regular reminders of the pundit class’s generally below-average intellect?

In Williams’s nearly 30 years with NBC, he perfected a signature move: responding to breaking news events with an affected somberness, soliloquizing gravely on the historical implications of said events while waxing poetic about justice, society, and What It All Means™. If only he had something meaningful to say.

In 2016, for example, after five police officers were shot and killed in Dallas, Texas, Williams used the incident to declare the death of President John F. Kennedy the “most violent” day for most Americans. Almost everyone else would consider Sept. 11 the “most violent” day, but, OK, your mileage may vary.

Williams also used the term “end of days” to describe the Dallas shootings. He referred to the attacks on the police and their response as “urban warfare” and an “urban nightmare.” He called the situation a “national emergency.” He repeatedly deployed the term “urban kill zones,” and, of course, there was more Kennedy talk.

“It feels like we’re becoming unraveled,” Williams intoned, tilting his head ever so slightly.

Later, during his coverage of a 2017 U.S. airstrike on Syrian military targets, he really went hard into the paint with the self-important, flowery commentary.

“We see these beautiful pictures at night from the decks of these two U.S. Navy vessels,” Williams said as he gazed at images of the nighttime airstrike. “I am tempted to quote the great Leonard Cohen, ‘I am guided by the beauty of our weapons.’”

He added, “And they are beautiful pictures of fearsome armaments making what is for them a brief flight over this airfield.”

Yes, NBC’s viewers are definitely going to miss this.

Vacuous, ultimately meaningless wind-baggery is not all Williams is good at. He’s also great at being generally terrible at journalism.

In 2019, during the Democratic presidential primaries, Williams cited an anonymous Twitter troll as evidence of the Democratic base’s supposed discontent with then-candidate Sen. Bernie Sanders of Vermont.

The Twitter troll said, “Okay, since this is trending, here’s #MyBernieStory. The year was 2016 and Bernie was already long eliminated from contention. An actual Democrat would have stopped torpedoing the nominee and worked to defeat Trump but Bernie had books to sell. The end.”

In response, an easily impressed Williams, who actually read that tweet on-air, said, “That kind of nicely sums up how some Democrats feel about Bernie when they hear him using a Trump talking point” against Amazon.

Later, in 2020, Williams cited yet another random Twitter user to make some larger point about money and politics. The Twitter user said of former New York City Mayor and 2020 Democratic presidential candidate Mike Bloomberg that he “spent $500 million on ads. The U.S. population is 327 million. He could have given each American $1 million and still have money left over. I feel like a $1 million check would be life-changing for most people. Yet he wasted it on ads and STILL LOST.”

You likely caught the mathematical error in the tweet right away — $500 million dollars split evenly among 327 million people means everyone gets a not-very-life-changing amount close to $1.50.

Williams, a handsomely paid anchor at a top news network, did not catch the error. On the contrary, he was quite in awe of what he obviously believed to be a meaningful, and accurate, statistic.

“When I read it tonight on social media,” said Williams, “it kind of all became clear. … It’s an incredible way of putting it.”

Then, of course, there’s the rather uncomfortable fact Williams anchors a spot at MSNBC precisely because he was outed as a fabulist in 2015 when it was revealed he had concocted ludicrous stories of personal grit and bravery while under fire.