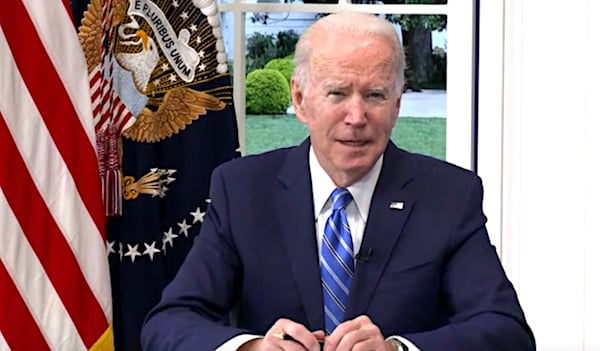 As he fights for his federal vaccine mandates in court, President Biden is getting hit with criticism from both sides of the political spectrum for saying Monday that there is no “federal solution” to the COVID-19 pandemic, only state solutions.

The president’s critics point to the many instances in which he has vowed to “shut down the virus” and save the country from the pandemic. And then there’s the federal requirement, among others, that larger companies ensure that all of their employees are vaccinated.

On Tuesday, the Republican governors of Florida, South Dakota, Arizona and Texas called on Biden to follow up on his remark by abandoning his federal vaccine and mask mandates and other restrictions.

The office of Florida Gov. Ron DeSantis’ told DailyMail.com that Biden is “abdicating responsibility and shifting blame” to the states.

“More Americans have died of COVID-19 under Biden than under Trump. Now that Biden has admitted to the nation that he has no plan to ‘shut down the virus,’ and that there is ‘no federal solution,’ we expect him to withdraw the unconstitutional and useless federal vaccine mandates,” a spokesman said.

South Dakota Gov. Kristi Noem wrote on Twitter:  “After a year, we finally agree. The federal government isn’t the solution.”

Sen. Tom Cotton, R-Ark., also among many other Republicans in agreement.

“When Joe Biden says ‘there is no federal solution,’ he’s trying to avoid blame for his incompetence,” he tweeted. “If he really believes this, he should rescind his unconstitutional federal mandates.”

Biden’s remarks came in a response to comments by Republican Gov. Asa Hutchinson of Arkansas, the chairman of the National Governor’s Association, during a virtual meeting Monday with 25 governors.

“One word of concern or encouragement for your team,” Hutchinson began, “is that as you look towards federal solutions that will help alleviate the challenge, make sure that we do not let federal solutions stand in the way of state solutions.

“The production of 500 million rapid tests that will be distributed by the federal government is great, but obviously that dries up the supply chain for the solutions that we might offer as governor,” the governor said in his opening remarks.

Biden, in his first opportunity to speak, responded: “There is no federal solution. This gets solved at the state level.”

However, on Tuesday, in a tweet sent from the president’s official account, Biden talked of a “federal plan.”

“My Administration has the back of every governor fighting COVID-19 in their state. Last week, I rolled out a federal plan to tackle Omicron by adding vaccination and booster capacity, hospital equipment, staff, and more,” he wrote.

“We’re going to get through this by working together.”

What a difference a year makes 👀 pic.twitter.com/IGF7A3Kp4e