A hunter has saved the lives of numerous koalas in the fire-ravaged forests on the outskirts of Mallacoota in East Gippsland, Australia, where bushfires have raged all week long. Twenty-two-year-old Patrick Boyle has rescued “eight or nine” so far, he says.

It started when Boyle ventured out into the fire-ravaged bush and found one koala and brought it to Mallacoota Wildlife Shelter.

“I was trying to think of what I could do and so I went out in the bush, because that’s where I like to be,” Boyle told Today.

“Straight away, found a koala. [A friend] waved me over because he had the first one and he was under the pump … He asked me to look after the little guy and it all started from there.” 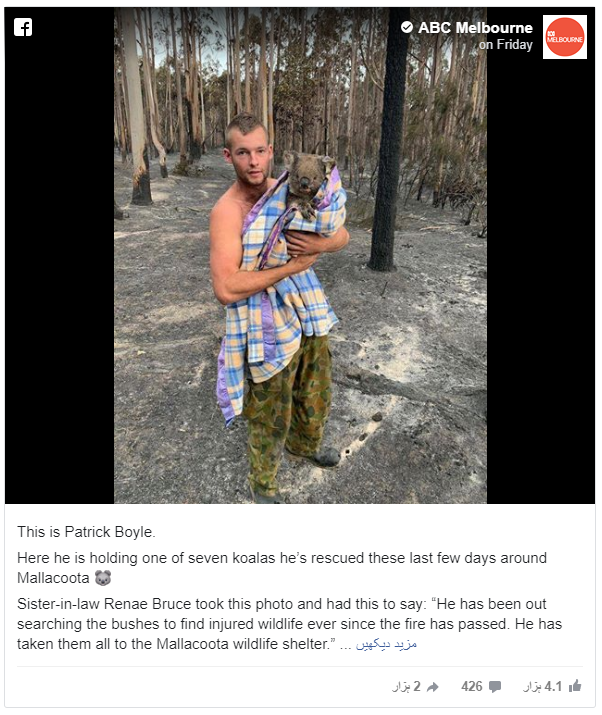 After rescuing one koala, he went out on his own to look for more that might be injured or struggling. Then, one after another, he found more koalas and brought them all to the local shelter as well. And the good news is they have all survived so far, he says.

The avid hunter says that given his proclivity, he’s an unlikely person to rescue wildlife.

“I’m a hunter—I’m one of the last people that others would expect to help these animals,” he told Stuff.co.nz. “Farmers, hunters and workers are the ones out there actually taking action right now.”

A photo of Boyle holding a rescued koala in a blanket amidst charred trees in the background, taken by his sister-in-law Renae Bruce, was posted on social media and soon garnered media attention from major news outlets.

“He has been out searching the bushes to find injured wildlife ever since the fire has passed,” said Bruce.

While thousands have evacuated the eastern Victoria town, the threat seems to have passed here already, Boyle says. Meanwhile, some 18 isolated communities in East Gippsland are still threatened by the blazes, and authorities are still trying to access them to provide aid. 7 News reports that two of these communities have been reached so far.

The deadly fires have already claimed the lives of at least two men: Mick Roberts from Buchan, and Fred Becker from Maramingo Creek, as of Friday. And 20 people are still reported missing, 7 News reports. As per Chief Commissioner Graham Ashton, that number is likely to continue to fluctuate.

Meanwhile, conditions are expected to worsen, as three fires in the alpine Omeo region recently merged, forming a 6,000-hectare blaze—that’s a bushfire about the size of Manhattan, as CNN cited.

Wildlife has suffered massive losses of life during the recent fires. According to ecologists from the University of Sydney, an estimated 480 million mammals, birds, and reptiles have been killed, including some 8,000 koalas, by the blazes, the Independent reports—that’s half a billion animals all told.

As far as Boyle and the town of Mallacoota goes, he remains optimistic.

“There is some parts that aren’t burnt but there is a lot of resources to jump on top of those if they burn and or start to burn from spot overs … I feel safe here now,” he said.

“Mallacoota has always been well-known for the tight community and looking out for one another, which is fantastic. Really makes it a lot easier and helpful when we have such a small close community because everyone is just doing what they can … Good spirits in the air, even though so much has been lost.”