On 03/12/2021, at approximately 3:13pm, deputies assigned to the City of Camarillo Police Department responded to a call for service reference a vehicle that had just been stolen. Upon arrival, deputies contacted the victim and learned her vehicle had been stolen from the parking lot of the Quality Inn and Suites. Detectives assigned to the Camarillo Special Enforcement Detail (SED) responded to the scene to assist with the investigation.

During the investigation, patrol deputies reviewed surveillance video depicting the suspect entering the victim’s vehicle and driving it away. A review of the video surveillance also assisted deputies in identifying the suspects as Jeffrey Chambers and Catlyn Cleaver.

As the investigation continued, detectives from the Special Enforcement Detail located the stolen vehicle, unoccupied, in a nearby industrial parking lot. Detectives initiated surveillance on the vehicle in hopes the suspects were nearby and would return to the stolen vehicle. Shortly after the surveillance was initiated, detectives learned Chambers and Cleaver were also staying in a room at the Quality Inn and Suites. It was also learned Chambers was on active parole in California for robbery. Additionally, it was learned that Cleaver was also on active Ventura County probation for shoplifting.

Jeffrey Chambers was arrested and booked at the Ventura County Jail for vehicle theft, possession of a controlled substance, conspiracy to commit a crime, possession of stolen property, possession of burglary tools, and a violation of state parole.  Chambers is currently in custody for the violation of his parole in lieu of $250,000 bail for the current charges. During the booking process, it was also discovered that Chambers was currently out of custody on $40,000 bail for an additional stolen vehicle charge.

Catlyn Cleaver was arrested and booked at the Ventura County Jail for vehicle theft and conspiracy to commit a crime. Cleaver is currently in custody in lieu of $20,000 bail.

The Camarillo Special Enforcement Detail is comprised of six plain clothes detectives who focus on efforts that negatively affect the quality of life of the law-abiding citizens of Camarillo. The goal of Camarillo SED is to reduce property and violent crime through investigations and directed enforcement.

Anyone with information about criminal activity occurring within the city of Camarillo is encouraged to contact the Camarillo Special Enforcement Detail (SED) at (805) 388-5100. Callers can remain anonymous. Information can also be provided by email at [email protected]. 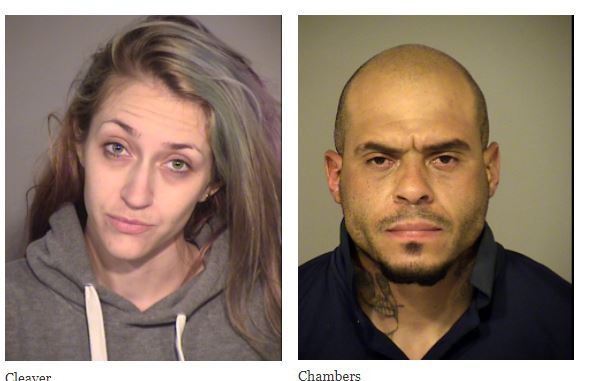