A 25 year-old man donning only boxer shorts and one sock climbed to the roof of a Los Angeles church Wednesday night and lit a cross on fire, according to officials.

The Los Angeles Fire Department (LAFD) responded around 8:25 p.m. to calls about a man climbing the church rooftop and “appearing to set the building on fire,” according to an LAFD alert. 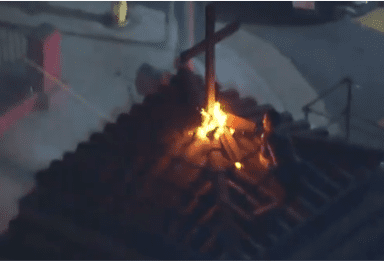 The man, whose identity was not revealed by the police, climbed atop the bell tower of St. Mary’s Catholic Church, the Los Angeles Times reported.

“When I looked up, he was up on the platforms, and all he kept saying was, ‘I don’t want to do it,’” local security guard and eyewitness James Thomas told KCAL 9, a Los Angeles CBS affiliate on Thursday. “So the first thing I said was, ‘Don’t do it then, because I’m scared of heights, and I’m not coming up to get you.’”

“For a minute we thought he was gonna jump, he climbed all the way to the top, he was throwing items off at the police, the fire department, people that was standing around,” Thomas added, according to KCAL 9. “As the night wore on, he hopped off the side and went on a foot chase.”

The man started a small fire below the rooftop cross, but the flame did not spread, according to authorities, LAFD officials said, the LA Times reported. The fire burned about one square foot of the roof but left minimal damage to the church.

Video footage shows the man —without pants and a shirt — crossing the roof of the church. The footage then shows him carefully sliding down scaffolding beside the church before jumping onto the rooftops of nearby buildings, and utilizing electrical wires from power lines to scale the side of one building, the video shows. =

Once the man made it to the ground, he ran to a residential building close by, where he shattered a window to flee, according to LAPD Officer Mike Lopez, the LA Times reported. The family inside was evacuated safely, according to officials.

The man was taken into custody about 10:30 p.m. outside the residence and was brought to a hospital, LAFD officials said, according to the LA Times.

He was arrested on suspicion of arson and burglary, Lopez said, the LA Times reported.

The LAPD did not immediately return a request for comment.

Just another day in LA.