As economists and investors assess the chances that recent, higher U.S. inflation rates will prove transitory or permanent, they should not lose sight of the well-established fact that higher inflation is associated with lower equity valuations (typically measured by the price-earnings or “P/E” multiple). The facts are easy to forget because it is commonly (but falsely) believed that when central banks issue massive new sums of money which do not much lift prices of consumer goods, the money must “spill over” to spending on other things like equities (causing “asset price inflation”). Not so. Equities are almost as “inflation sensitive” (and negatively so) as bonds.

The S&P 500’s price-earnings (P/E) multiple roughly doubled from 19X at the end of 2018 to 39X at the end of 2020, without much empirical grounding or logical justification. On every possible front in 2019-20, the political-economic climate worsened. So did the fundamentals – economic growth, profits, and dividends. Historically, equity valuation expands sustainably when the policy climate is predictable and pro-capitalist. The past two years have seen policies (from Trump and Biden alike) that are unpredictable and anti-capitalist. Today’s high valuation is not sustainable; a major decline in the P/E multiple is possible by the time of the 2022 election, with profits (E) outpacing price (P) gains.

Another risk to high equity valuations is higher inflation. Some economists (mainly those Monetarists and Austrian-schoolers who are not familiar with the Fed’s new operating system) simply presume that U.S. inflation must accelerate due to huge increases in the money supply – which have certainly occurred since 2008. They have been warning about this for years now, while falsely predicting a 1970s-style dollar crash and much higher inflation. Their supply-only model obviously deemphasizes or ignores the possibility of an equally vast increase in demand to hold cash balances (i.e., hoarding by banks, companies, and households).

Other economists believe banks are holding more cash than usual because the Fed, since 2008, has paid them interest on required and excess reserves. This policy, they argue, depressed bank lending and ultimately inflation in the years following the financial crisis. But the rate paid is miniscule (today, just 0.15%) and when it was raised steadily from 0.25% to 2.40% (and kept above 2.00%) between October 2015 and September 2019, the ratio of excess reserves to deposits didn’t rise but declined (by 61%). Thereafter, as the interest paid on excess reserves was slashed (from 2% to the current low level), the excess reserve ratio climbed. 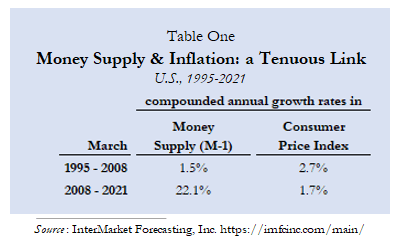 Table One reveals that the U.S. inflation rate has been much lower in the thirteen years since March 2008 (1.7% p.a.) even as the money supply increased 22.1% p.a.; inflation was 2.7% p.a. over the prior thirteen years (1995-2008), even though the money supply barely grew at all (1.5% p.a.). Clearly, no tight link exists between money supply and inflation. The difference is demand.money supply & inflation
Figure One makes clear that for the past half-century there’s been an inverse relationship between the U.S. inflation rate and the S&P 500’s valuation (P/E multiple). The correlation is both high and negative: -66%. 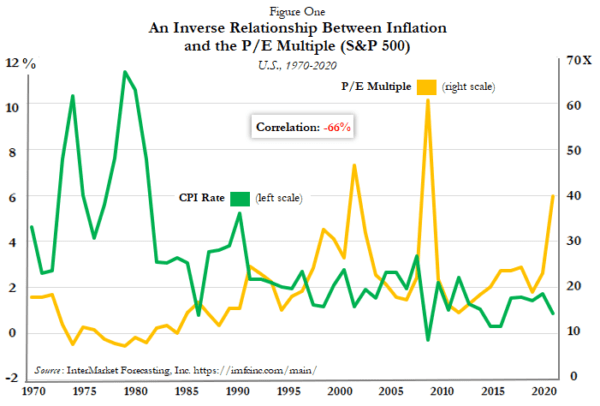 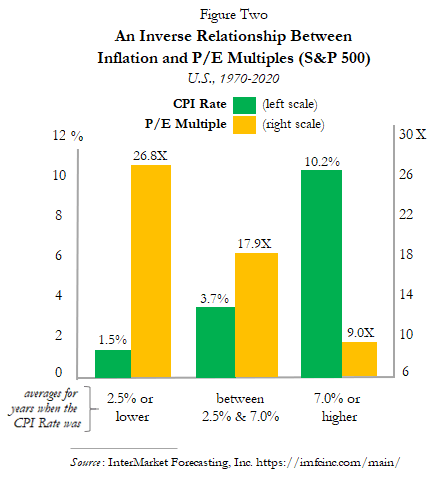 It is possible that U.S. inflation hereafter accelerates amid a decline in the demand to hold cash balances, as Covid-phobia wanes, lockdown decrees diminish, and the U.S. economy “reopens.” Sustained, materially higher inflation has not yet been signaled by a rising gold price (it was up 40% in the year through August 8th, to $2,065/oz., but has since declined by 14% to $1,785/oz.). Yet banks, firms, and households might begin aggressively dispensing some of the cash they’ve been hoarding; that didn’t occur after the vast money creation of 2008-10, but it might occur now.

AIER Senior Fellow Richard M. Salsman is president of InterMarket Forecasting, Inc. and a visiting assistant professor of political economy at Duke University. Dr. Salsman earned a B.A. in economics from Bowdoin College (1981), an M.A. in economics from New York University (1988), and a Ph.D. in political economy from Duke University (2012). His personal website is https://richardsalsman.com/