Well, as we warned, the Evergrande contagion has finally arrived and with China closed for holiday traders are getting out while they can and where they can, and on Monday morning in Asia that means Hong Kong, where Evergrande – which is about to default – has crashed by another 13% this morning and is on track to close at its lowest market cap ever (to be expected ahead of a bankruptcy that will wipe out the equity)… 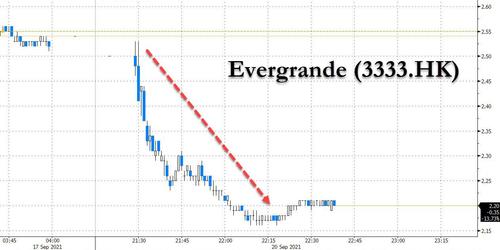 … and with Evergrande property development peers such as New World Development & Sun Kung Kai Properties both down over 8%, and Sunac China and CK Asset plunging over 7%, the Hang Seng property index has crashed more than 6%, its biggest drop since 2020 to the lowest level since 2016… 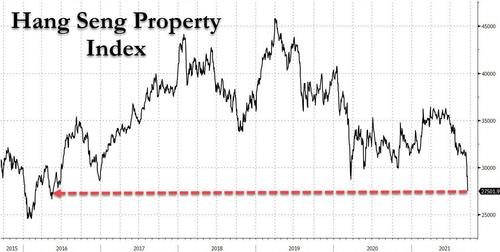 … and the broader Hang Seng index is down 3.5% in early trading, to the lowest level since November 2020. 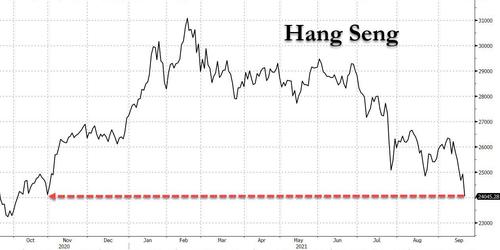 And with traders on edge about the rapidly spreading contagion (as we described earlier) even sectors supposedly immune to China’s property woes, such as the Hang Seng Tech Index are plunging, sliding as much as 2.7%.

And speaking of Evergrande’s imminent default, we noted earlier that while the company is scheduled to pay $83.5 million of interest on Sept. 23 for its offshore March 2022 bond, and then has another $47.5 million interest payment due on Sept. 29 for March 2024, the day of reckoning may come as soon as Tuesday: that’s because Evergrande is scheduled to pay interest on bank loans Monday, with a one-day grace period. In other words, should it fail to arrange an extension, it could be in technical default as soon as Tuesday (for a much more detailed analysis of next steps please see “This Is How Contagion From Evergrande’s Default Will Spread To The Rest Of The World“.) Spoiler alert: a default is coming because Chinese authorities have already told major lenders not to expect repayment. 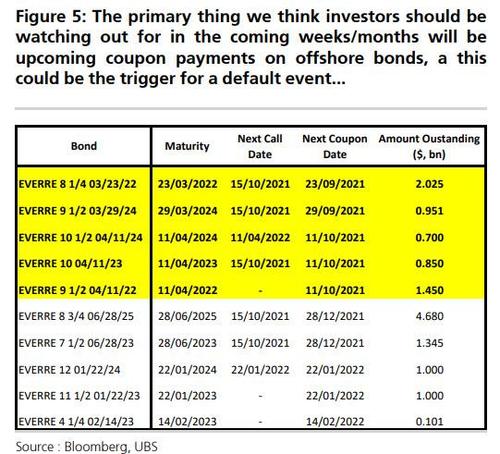 Incidentally, as Bloomberg’s Mark Cranfield notes, Hong Kong stocks can’t blame low liquidity for the meltdown as “trading volumes on the Hang Seng and H shares indexes are running well above the 10-day average on Monday as both drop by ~4%.”

There’s more: junk-rated Chinese dollar bonds slid by as much as 2 cents, according to credit traders, pushing their yield to just shy of 15%, the highest since 2011.

Other sectors are also getting hammered, such as Ping An Insurance, China’s largest insurer by market value, which plunged 7.3% in Hong Kong.

“Investors may be concerned about highly-geared names and don’t care about valuation nowadays,” said Philip Tse, head of Hong Kong & China Property Research at Bocom International Holdings Co Ltd. “There will be further downside” unless the government gives a clear signal on Evergrande or eases up on its clampdown on the real estate sector, Tse said.

Meanwhile, pouring gasoline on the fire, Goldman’s China analyst Hui Shan published a note (available for professional subs in the usual place) on Sunday in which it discussed the rising risks from the property market, writing that even without the Evergrande debacle “housing activity fell sharply in July and weakened further in August” largely in response to China’s structural reforms in the property sector (such as the “3 Red Lines”). At the same time, “concerns over Evergrande are rising and signs of financing difficulties spreading to other developers are emerging.”

In the note, Goldman also estimates the potential impact of the coming property market crash on Chinese growth under different scenarios, which can be described as bad, worse, and terrible, with the bank expecting a GDP hit anywhere from just over 1% to as much as 4.0%. Needless to say, such an outcome would be devastating not only for China but for the world. 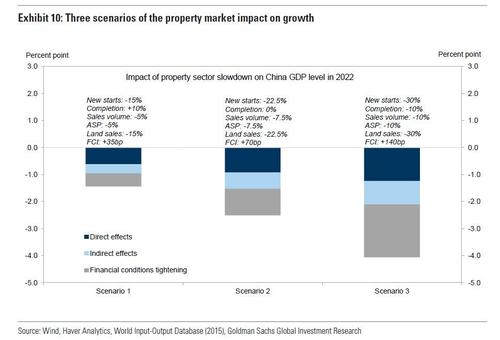 Looking ahead, Goldman notes that while for now, its baseline remains that any potential default or restructuring of Evergrande would be carefully managed by the government with limited contagion effect in both financial and property markets “this would require a clear message from the government soon to shore up confidence and to stop the spillover effect, the absence of which we think poses notable downside risk to growth in Q4 and next year.”

In short, as we explained previously, it all depends on Beijing whether the current selloff accelerates, or if we see a furious surge as Beijing directly or indirectly injects another cool trillion or 10.

Meanwhile, as Bloomberg’s bloggers write echoing what we said yesterday while traders may have been hoping there would be some clarity on the road ahead for the company, given it has bond payments due this week, “the complexity of the case may be the reason for a lack of communication from the authorities. That compounds the uncertainty for investors, and with China on holiday, the momentum for lower Hong Kong stocks are picking up pace.”

So while contagion is clearly hammering Hong Kong in lieu of the shuttered China, it is also spreading to Australia where the Aussie dollar is  mining stocks have slumped as iron ore prices continue to collapse, with the industry group falling 4%. Among the biggest movers, Champion Iron fell as much as 12.5% in early trade Monday, continuing a four-day losing streak while Fortescue Metals dipped as much as 7%, falling to the lowest price since July last year.

Contagion has also moved beyond merely stocks, with US equity futures trading as low as 4380.. 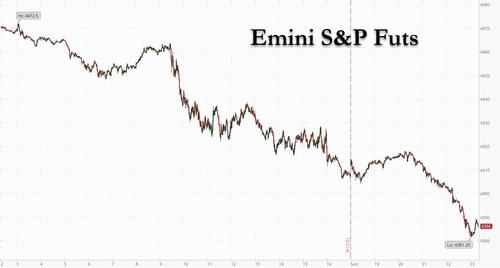 … and is starting to impact both commodities, with Iron Ore tumbling more than 10% on fears a Chinese property crisis will lead to collapsed demand for steel, as well as FX, with the dismal mood lifting USD/HKD to the highest for September, and while USD/CNH is firmer, but for now, that is in line with broad dollar strength. Should EUR/CNH start trending higher, Bloomberg notes, “that would be a signal traders have become anxious about the health of the yuan amid the equities slump.”

Incidentally, it is hardly a secret that the bigger the market crash, the more likely Beijing is to do something to bail out the market and tens of millions of very angry Chinese investors who may soon show Nancy Pelosi what an insurrection really looks like. But should the silence out of Beijing persist, it’s only a matter of time before the “anxiety” hits levels not seen since Sept 2008 as an outcome most traders thought impossible becomes inevitable.