How To See The Grunion Runs On Southern California Beaches 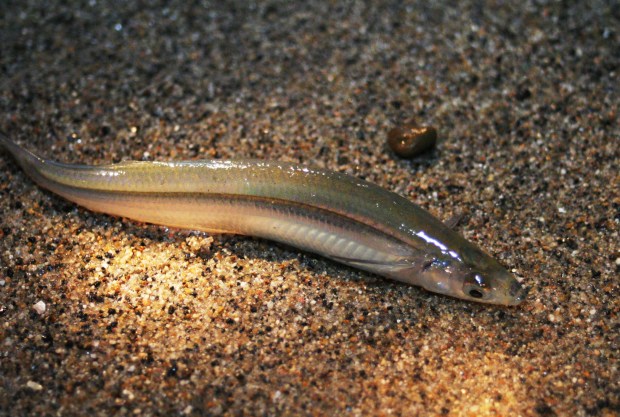 Editor’s Note: Forty-five years ago, a weekly newspaper covering Belmont Shore — where watching grunion runs was a popular late-night activity — was named the Grunion Gazette. It continues to cover Long Beach, and the grunion, today.

Every spring, silvery smelt-like fish called grunion can be found late at night during high tides on the beaches of Southern California, mating in what experts say is one of the most unusual phenomenon in the natural world.

Here’s how it works: the female grunion are the first to get in the surf and reach the highest point possible on the beach, or even a bit higher; she pushes her tail into the sand and the male follows her, wrapping his body around hers so that he can fertilize her eggs with milt. The male is quick — 30 seconds or so and he’s on the next wave back to the ocean. It takes the female longer to dig herself out of the sand, but she catches the first wave she can back to the safety of the water.

Those eggs, up to 3,000 of them in one pile, stay buried until the next high tide a couple of weeks later, when the waves stir the sand, help the eggs hatch, and carry the infants back to the water. In the meantime, adult fish are starting the process all over again, often on the same beach.

Often, the fish have an audience of both people and birds. And sometimes, that audience tries to catch the grunion before they get back to their ocean home.

Runs last for about two hours and take place late at night for four nights around the full and new moons. According to the California Department of Fish and Wildlife, the second hour is usually better, and the best runs normally occur on the second and third nights of a four-night period.

Runs begin in March and run through August. Fish and Wildlife says the peak spawning begins in late March — now — to early June.

The latest grunion run took place March 18-21. They will also run April 1-4 — but you can’t catch them legally in April. You can watch — but no grabbing. Grunion-catching is banned in April and May in order to allow the species to propagate. Taking grunion is legal in March, June, July and August, and a fishing license is required for anyone 16 or older. The next time it’s legal to catch grunion is the last two days of a run, on June 1-2.

Trekking to the beach late at night to watch for grunion has become a Southern California ritual, sort of a coming-of-age experience. Last year, Nyki and Ryan Franz waited with their four children, ages 1 to 8.

“We home school, we wanted to show them science, in nature,” Ryan Franz said in an Orange County Register story.

Nyki Franz said going grunion running is a childhood memory for her, one she wants to share with her own kids. She thinks she saw them at the San Clemente Pier, but it’s a blur.

“It feels like a dream,” she said of the memory.

Grunion appear to prefer gently sloping beaches, where high tide pushes waves well beyond the normal water line, protecting eggs. Protected beaches, such as those behind the breakwater at San Pedro Bay, also are popular with the fish.

The population has remained stable in recent years, Fish and Wildlife officials said, but loss of spawning habitat to erosion, harbor construction and pollution continues to be a threat.

Most adult grunion are between 5 and 6 inches long, with the female slightly larger than the male. They have no teeth, and typically are eaten bones and all, similar to sardines. It is legal to catch them, with significant restrictions in both method and season.

The only legal way to catch grunion is by hand — which can be a trick with the slippery fish. No nets can be used, and no holes can be dug in the sand. While there is no limit to the number of fish caught, Fish and Wildlife officials urge people to only keep what they can use.

And it’s just not fair to grab female grunion while they are dug into the sand, laying eggs.

The most popular way to cook grunion is by grilling whole in butter or oil. Larger grunion also can be filleted.