How to Stay Organized When You’re (Almost) Always Home

Benjamin Franklin once said, “For every minute spent organizing, an hour is earned.”

When we’re constantly on-the-go, it’s easier to overlook a lack of tidiness. But when you spend most of your time at home, scientific studies indicate clutter in the home can have a negative impact on your life.

She added, “The house doesn’t organize itself throughout the day—we have to keep up with the messes we make.”

The lack of order in our physical work environment can adversely affect our performance and well-being, says a 2019 study published in the journal Building and Environment. 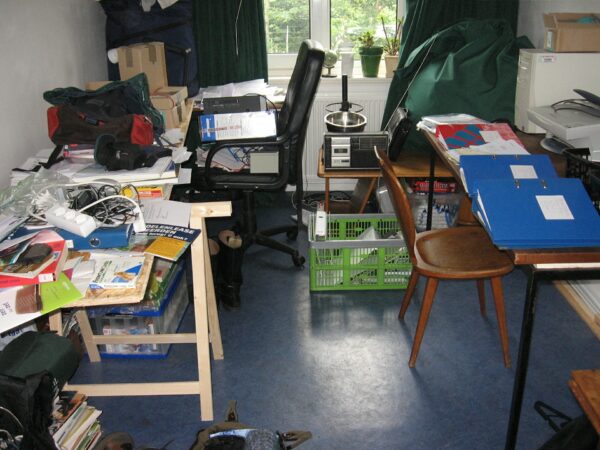 A file photo of a cluttered room. (C.M. Zijderveld/Pixabay)

A file photo of a tidy home office. (Slava Keyzman/Unsplash)

Another study, published in Current Psychology in 2017, indicates that people who live amid the most clutter are often the worst procrastinators.

On the other hand, the benefits of clearing clutter are considerable.

Orderly environments can lead to healthier choices and generosity, a 2013 study published in the Association for Psychological Science suggests. And according to a 2011 study in The Journal of Neuroscience, clearing visual clutter has been shown to improve the ability to process information.

Clearly, during trying times—when anxiety levels can spike—there are many benefits to living in an ordered and functional living space. But everyone’s idea of order is different.

“Organizing is very, very personal,” said Barba, who has done it professionally for nine years. “When it comes to organizing, I’m not about ‘How perfect does this look?’ because that’s not sustainable.”

She doesn’t believe everything has to be perfect to be organized. Rather, she said it’s about “being able to manage your home and family and still feel organized, even if everything isn’t in its perfect place all the time.”

“I’m super big on: evaluate, re-evaluate, and make adjustments where needed,” she said. “And don’t be afraid to move things around.”

Barba shares a few tips about how people can keep their homes organized during the current circumstances.

Start Wherever Is Going To Be Most Impactful

“Nine times out of 10, my clients tell me they want to clean the garage first.

“But then, I tell them, ‘If I could snap my fingers and make your garage be 100 percent the way you like it, how much would your life change tomorrow?’ And that answer is always, ‘Oh, well, not much.’

“So why spend four hours in the garage?

“Maybe they don’t care that the spare bedroom is messy. Even though it could be the messiest room in the house, they don’t care, because no guests come. Everyone has a different list of priorities.

“I would say, start wherever is going to be the most impactful for your life—that when you wake up in the morning, that’s how quickly you can feel that change.”

“Resist the urge to pull everything out, because it will feel more overwhelming than when it was all in.

“Before, it was all in a cupboard or in a cabinet or a closet, where you could close the door and not look at it. But now it’s all out and you have to deal with it. It’s kind of like over-serving yourself food.

“So you don’t ever want to pull everything out. Now, if it were a drawer, I would say that would be fine, because you really can’t get into too much trouble just unpacking a drawer. But a closet, definitely no. So just work in pieces.

“If you work to the left of your closet, and that’s where your jeans were, just collect jeans. So pull your jeans out, and then go look for more jeans. Now, you’ve got all your jeans together, and look at your closet. Chances are, you probably don’t have room to put your jeans back.

“Now, organize whatever the next thing is.”

“What I wanted to let moms know is: don’t worry. Just let it go. Don’t be super micromanaging at this moment in time about toys, because right now they’re being imaginative, they’re playing.

“Also, company’s not coming. So they can kind of let go of that fear of, like, I don’t want my friends to see this. This is actually an OK time to let those types of things be. It’s fine. Don’t worry about it.”

“Throughout the day, [kids] are playing with their toys and games and coloring books and crayons. That’s fine, [but] there needs to be a reset time. Six p.m., 7 p.m., 8 p.m.—some sort of time where we [reset].

“‘We can live like this. Everyone’s having fun with their own stuff. Oh look, here comes 7 p.m. Let’s reset.’ Crayons go back in their box, the coloring books get closed, everything goes back where they need to go.

“That way, you don’t feel like you’re just living in this endless, disorganized bunker.”

“I feel like when people label, it’s more of a permanent thing … they’re kind of making themselves stick to a rule.

“I’m sure you’ve seen on Instagram or Pinterest, the perfectly organized linen closet. And the Q-tips are labeled and the batteries are labeled.

“Well, what if tomorrow you buy more of something or less of something? Because, you know, obviously people now are buying more than what they were buying before. Move the batteries, go put them in the kitchen drawer. Now, you have room for this new thing you bought.

“Organizing is not that beautiful thing you saw on Instagram. Organizing is just changing and adjusting so that your life is easier.”

“Now, we’re home 24 hours a day. You’re never going to really catch up to yourself. This is just the nature of the beast.

“Now the kids are home all the time. And now parents are having to teach them their schooling. That’s a full-time job now. So don’t beat yourself up, mom and dad, because the house will not look magazine ready.

“But it’s fine, because no one’s coming over, and no one’s trying to take pictures of your house.”