Hundreds gathered on Sunday December 13th on the southeast parking lot to sing Christmas carols in defiance of Governor Newsom’s latest lockdown edict.  The event was  billed as a peaceful protest, which is actually allowed under the current mandate.  However singing is not encouraged.  This is the second such event in the county.  The first was held on Sunday December 6th, attracting over one hundred people at the Westlake Promenade.

Actor Kirk Cameron, who was one of the event planners, told the story of St. Nicolas the real Santa Claus. Nicolas was a third century Christian who had to defend the faith.  This saintly man, who put himself out there for Christ, was later morphed into the jolly holly commercialized bearded icon of today.

Pastor Rob McCoy also spoke, telling of how the patriots who fought in the revolution faced numerous hardships, lack of armaments, the brutal winters at Valley Forge where a third of the men didn’t even have shoes as they marched through the snow.  Also among those difficulties was a small pox epidemic.  At that time the army had to be inoculated or face being decimated by the plague.  Inoculation meant piercing a boil of someone who was already infected and then pricking the skin of a healthy solider.   The men knew the risk they were taking.  They could very well get the disease.  Over five percent of them did. They became infected with a virus much more virulent than what we face today.

There were patriotic songs like God Bless America interspersed with the carols.

The Recall Gavin trailer was brought in from Santa Clarita, and petition gatherers circulated through the crowd gathering signatures. You can download petitions here.

It was an evening of good cheer, supporting a community who has had enough of government overreach. 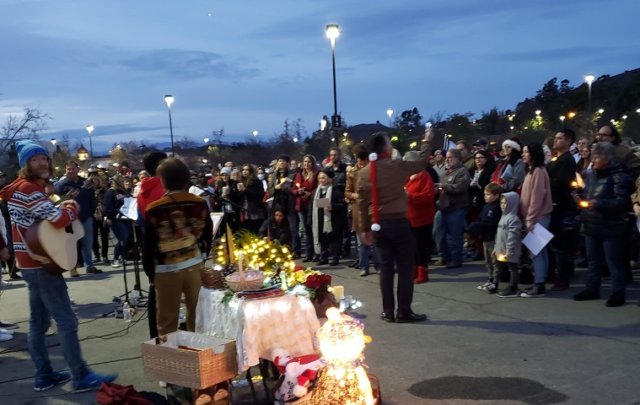