“If Jesus could change Nicky Cruz, He can change you”

WASHINGTON, D.C.—”If Jesus could change Nicky Cruz, He can change you,” said evangelist Nicky Cruz at The Return at the Washington Mall on Sept. 25.  The former New York gang member from Puerto Rico was rejected by both his father: a satanic priest and his mother (involved in black magic) who told him “I never want to see you again. You are the son of the devil and I was cursed the day I brought you into this world. I was completely damned: abused mentally, emotionally, and physically.

“I was nine years old and I am a failure—good for nothing. My life died. I was just waiting to be buried when I was 19 or 20.  My mother beat me so much, I tried to commit suicide when I was nine years old. I ended up on the streets of Brooklyn” and the leader of New York’s most notorious street gang, the “Mau Maus” which were featured in a 1958 Life article about seven teens.  “We were one of the worst gangs in New York City and we fought all the other gangs. We declared war against the police.

I became a good liar. I did a lot of things wrong. My hands were full of blood. I saw people die. I saw my best friend die in my arms. He was 17. I was hugging him. He was dead. I was just wild on the streets. New York City was like a jungle. Animals had to kill. I was hurt and possessed with anger and bitterness.”

Yet, Nicky, who had 17 brothers and one sister came to know the Lord through the preaching of David Wilkerson, a small Assemblies of God town preacher from Pennsylvania who felt a strong urge to go and help the boys and gangs in New York City.

“I told this man (David Wilkerson) ‘You, shut up.’ I slapped him. I cursed him. I spit on him. But then he says ‘Kill me, if that makes you feel good, go ahead and cut me into a thousand pieces and throw those pieces in the street, but know that every piece is going to cry out that Jesus loves you.’ This guy is spooky. No one tells me to kill him. For two weeks all I could hear is ‘Jesus loves you.’

“I gave my life to Christ and He broke the curses of witchcraft my mother spoke over me. Some 13 of my brothers have come to know Jesus and three of them are ministers.   I know what Christ has done.”

After preaching the gospel to millions of people all round the world, Nicky told The Return participants, “Some of you need Jesus. You need forgiveness for the things you have done. You need help. Jesus Christ can help you. He can heal your heart and take away your pains.

“Jesus will come to you, if you call to Him right now. Release your life totally to Jesus Christ, it’s okay. Take your fears to the Cross. Jesus is going to receive you with open arms and will help you with your fear.”

(Editor’s Note: Nicky’s story can be viewed in The Cross and Switchblade written into a book by David Wilkerson and John and Elizabeth Sherrill in 1963 and then made into a movie in 1970 with Pat Boone who called him the “garbage can killer” as David Wilkerson and Erik Estrada as Nicky Cruz in his screen debut. The book has sold more than 15 million copies in over 30 languages. Nicky’s biography is entitled “Run Baby Run” written with Jamie Buckingham in 1968 and made into a documentary of his life in 2008.) 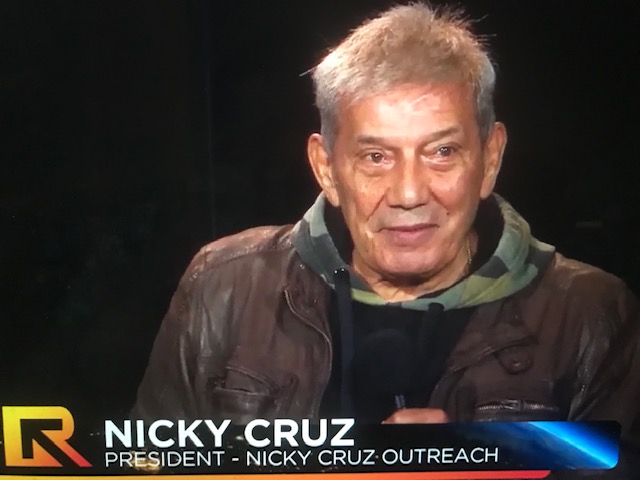