In The Swing Of Things

by The Sacramento Observer, CalMatters Network

Relaxation and recognition are the names of the game for a group of local women who golf together and acknowledge those who tore down doors for them to do so.

The SacTown Lady Golfers recently paid tribute to Dr. Charlie Sifford, the first Black player on the PGA Tour. Members joined forces with another group, the Sacramento Area Black Golf Club, to host a “Just Let Me Play” tournament at Wildhawk Golf Course honoring the late Dr. Sifford, who would have been 100 on June 2. They recognized him for his achievements in golf and his efforts to desegregate public recreational facilities. 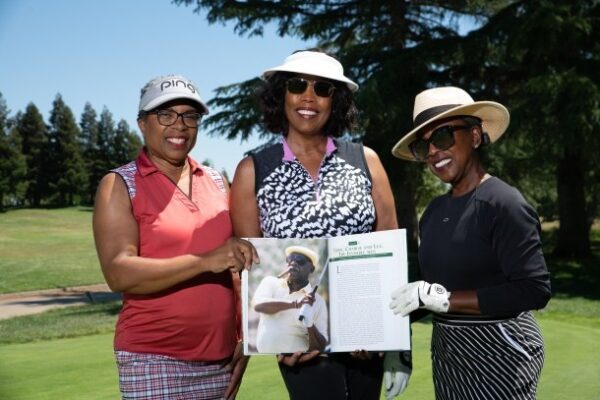 “It was a Caucasian sport and African Americans were not accepted into the sport other than to be caddies,” said SacTown Lady Golfers member Persis Ingram.

“That was the way that African Americans, men specifically, began to learn the game. Charlie Sifford was a dynamite player, but he wasn’t accepted, of course, until 1961 when they decided to allow him a PGA Tour card,” Ingram continued.

Ingram learned of Dr. Sifford through following a younger trailblazer, Tiger Woods. She learned of Woods and his rise in the sport upon taking her son to lessons.

“Once I learned about Tiger Woods and did a little background history on him, I learned that he accepted Charlie Sifford as the ‘grandpa he never had,’” she said.

SacTown Lady Golfers founder Ursula Whitfield also points out that Woods named his son after Dr. Sifford. Charlie Woods, 13, took after both men and is a star on the junior golf scene.

Being an educator, Ingram delved into learning more about Dr. Sifford and others who also paved the way for future generations.

Dr. Sifford wanted to play golf at a local course in his hometown of Charlotte, North Carolina. He was chased off and threatened because Blacks weren’t allowed on the green back then. That same park was named for Dr. Sifford in 2011.

Playing a White-dominated sport, Dr. Sifford constantly was called the n-word and literally treated like feces, which commonly was placed in holes along a course so he’d come up with dirty hands in retrieving his golf balls.

“I try not to get emotional, but sometimes I do when I think about the atrocities they suffered,” Ingram said.

It’s imperative, she said, to remember pioneers and what they went through in overcoming barriers.

Ingram likes the diversity she now sees in golf.

“There are a bunch of us out there now,” she said. “Not so much through advertisement, but the phrase, ‘Each one reach one.’”

“A lot of high schools do have golf programs. We just have to get our kids involved with them. As a matter of fact, one of our ladies who plays with the SacTown Lady Golfers, her name is Patricia Stewart. She actually coaches over at Inderkum High School. That’s one thing, just getting kids involved,” she said.

“And then of course, they have the First Tee program and the Sacramento Area Black Golfers, they do an excellent job in promoting young golfers as well. They’ve given scholarships to young golfers.”

Whitfield golfing 10 years ago. Her boss at Nationwide Insurance invited her to play in a tournament hosted by the Center for Fathers and Families.

“I played with my husband’s golf clubs and just absolutely loved it,” she said. “I’ve been hooked ever since.”

The game’s social aspect and the opportunity to be outside and get exercise are draws for her.

“Several of us just liked to play golf and we enjoyed each other, so we just thought, ‘Hey, you know what? We need to have a little golf group,’” Whitfield said.

Today the group numbers about 40 who convene to play as well as seek to raise awareness of Blacks, and Black women, playing golf. Golf is a more affluent sport, not as widely played as other sports more popular in the Black community.

“There are golf deals out there,” Whitfield said. “You don’t have to pay a lot of money to play golf all the time. I don’t know what some of the barriers are, but I do know that when we see other Black women or women of color playing golf, we try to communicate with them and try to invite them into the group.

“We’re not a competitive group, so we aren’t like some of the other golf leagues where they have their NCGA (Northern California Golf Association) number. I have my NCGA number and I have belonged to other golf groups, but we don’t require any money to join or anything like that. It’s purely social, just to fellowship and get out there and have fun.”

Growing The Game For The Next Generation

Ingram is happy to recruit more members. She’s also happy to see young women like Mariah Stackhouse and Tiger Woods’ niece, Cheyenne Woods, representing on the green and following in the footsteps of trailblazers such as Althea Gibson and Renee Powell. She wants to see more African Americans discover the love of golf.

“There’s so much to learn about golf other than just chasing the ball,” Ingram said. “It also teaches character and integrity. You are competing against yourself and you are the one who is charged with keeping your own score. If I strike at the ball four times, I’m expected to acknowledge that on my scorecard because nobody has your scorecard. As far as kids are concerned, it is a great method of teaching them character building and integrity.”

Champ’s foundation. The foundation is housed locally on a course 10 minutes from where Ingram lives.

“I’m in the process of organizing a group of women to take lessons at his foundation. He has one in Texas also, but this one over here by me is where he grew up and where his grandpa Mack taught him how to play,” Ingram shared.

“I went out on a golf outing, but that was just a little tease,” Sayles-Owen said.

She later married a man who liked to golf.

“That became a hobby for us. After that, I joined a golf group, a different golf group, and got involved and then I ended up golfing about twice a week – once with the ladies and then once with my husband.”

Sayles-Owen still gets out on a local course once a week.

“I really like it,” she said. “What got me hooked on it when I was working is that I could go out golfing on Mondays and Wednesdays after work. It was like a little vacation, going outside, getting fresh air and exercise. Getting together with the ladies that I golf with. After we played and by our kind of hanging out, it just became sort of a habit. Even now that I’m retired, I go out with ladies during the day. Wednesdays are our normal day.”

“My first big event was when they held a golf tournament in recognition of breast cancer month, and that was a ton of fun. I got to meet all the ladies at that event,” she said. “After that we went on a wonderful trip out of town to San Andreas to golf. We golfed and we did the wineries in the area. It was very nice.”

The Face Of Golf Is Changing For The Better

Most of the SacTown Lady Golfers are older Black women, but the group makes efforts to reach other, younger women.

“One of the things we do is really have an open policy in terms of people joining,” Sayles-Owen shared. “I personally like the thought of young women who haven’t had the opportunity to golf. We are a group of ladies that are relaxed. And so if you’re new to golf, we are very welcoming.”

Genoa Barrow | OBSERVER Senior Staff Writer
The post In The Swing Of Things appeared first on The Sacramento Observer.