Words and photos by David Pu’u

I have needed to monitor the recent BLM protests in Ventura, for a number of business and community related reasons.

This last Saturday, July 4th was BLM protest number four, that I am aware of.

It was also the second one to go through downtown Ventura in as many weeks. 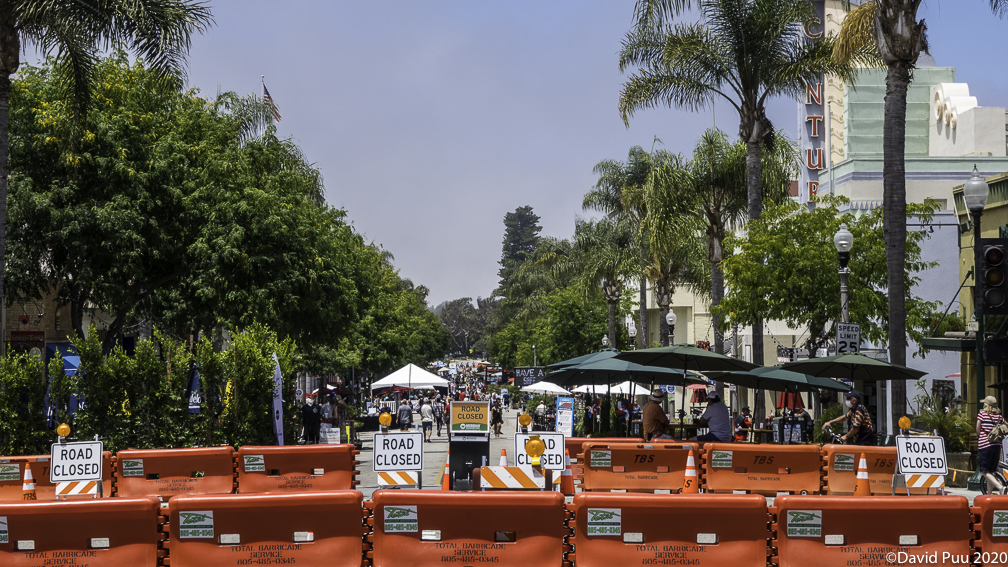 Watching the advertised protest staging shift mid day, apparently in response to citizens surrounding the Padre Serra Statue in front of City Hall,  indicated organizational skills on the part of the Protest.

The City had erected a series of chain link fences around the statue the day prior, in order to deter damage. 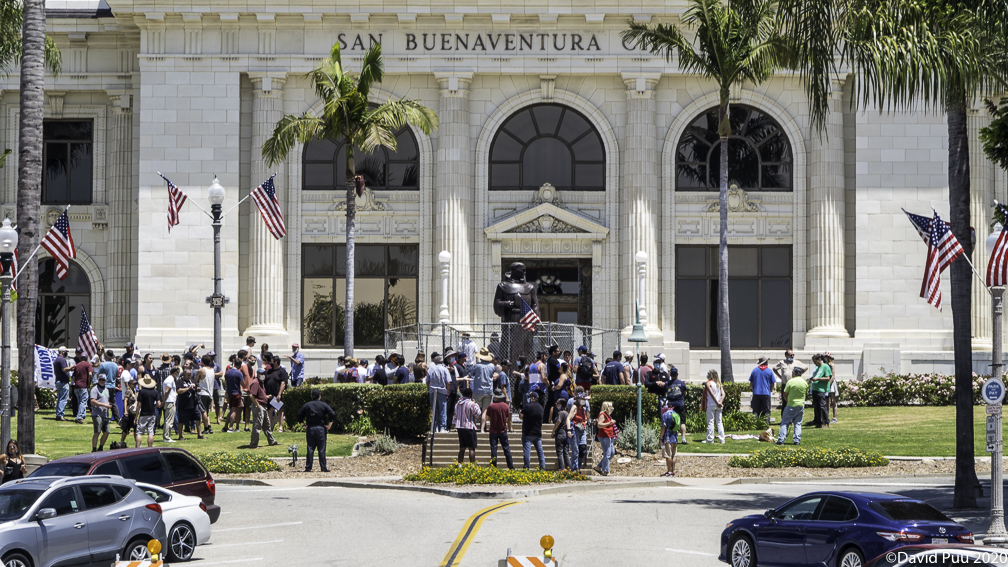 I understand what paramilitary operations look like, having worked on training exercises in Rescue, where we train in that manner. This is what I have witnessed being engaged, in all three of these marches.

Note the Rasta guy, with his flag, and costume. This man was involved in focused promotion of violence and trying to bird dog people along the protest route. I witnessed him chasing a man up Fir St while screaming “That man is a racist”. Some elements of the protest crowd started to dogpile the victim, who smartly kept moving up the street and away from the altercation. 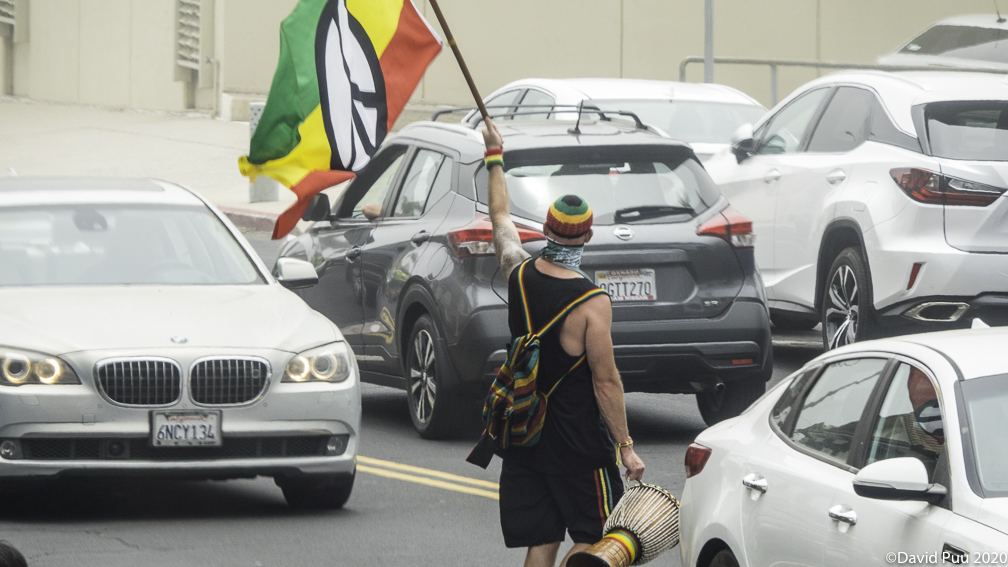 The image of the masked bearded white man with a bull horn. That guy walked up Fir and into the ongoing Protest march and immediately began to try to incite marchers. 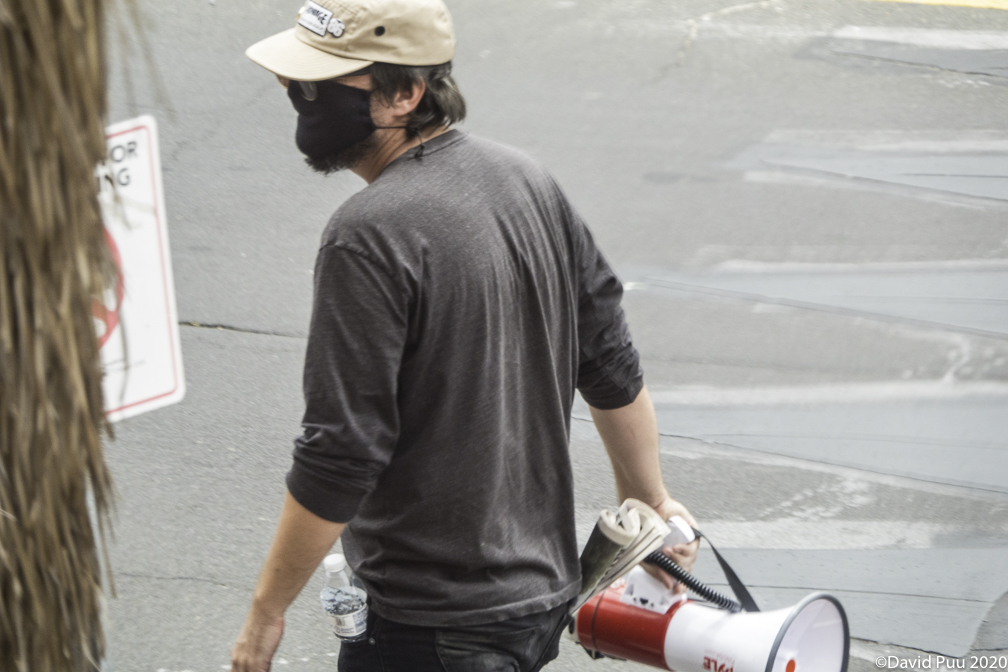 To the credit of those marching down Main Street. Not many bought into being manipulated by any of what appeared to be agitators, who may have been outside the organizers’ purview.

The chain of events this week:

New “mandates” issue from the Governor.

County and City entities endeavor to interpret and enforce those rules, issued by what amounts to executive order. (They are not laws being enforced)

State, County and City beaches close. Some access is allowed for campers. Everyone else is ordered away. (Unequal protection done under color of authority)

Restaurants are now serving in the middle of Main Street, since they cannot have anyone INSIDE.

Marchers go right through it all. 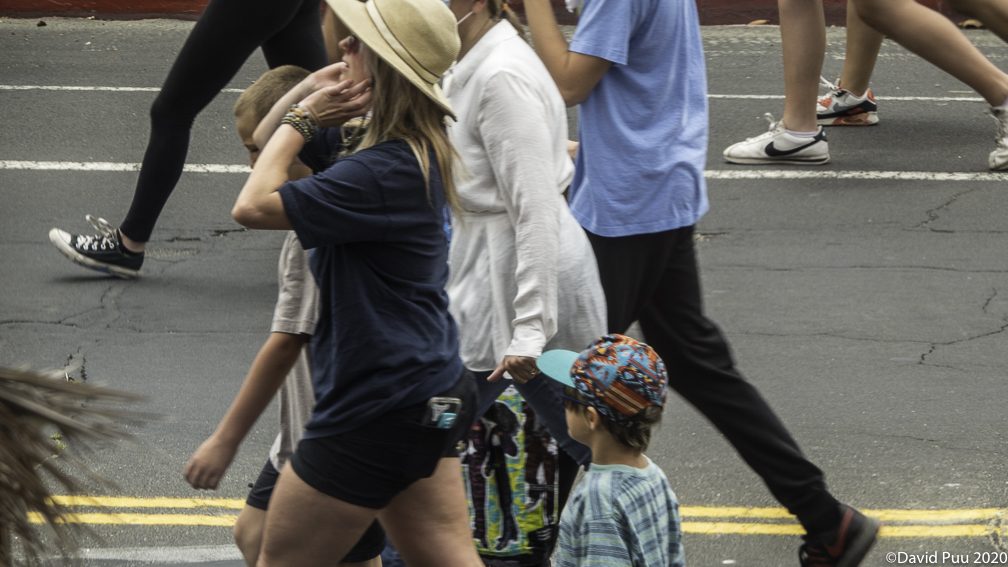 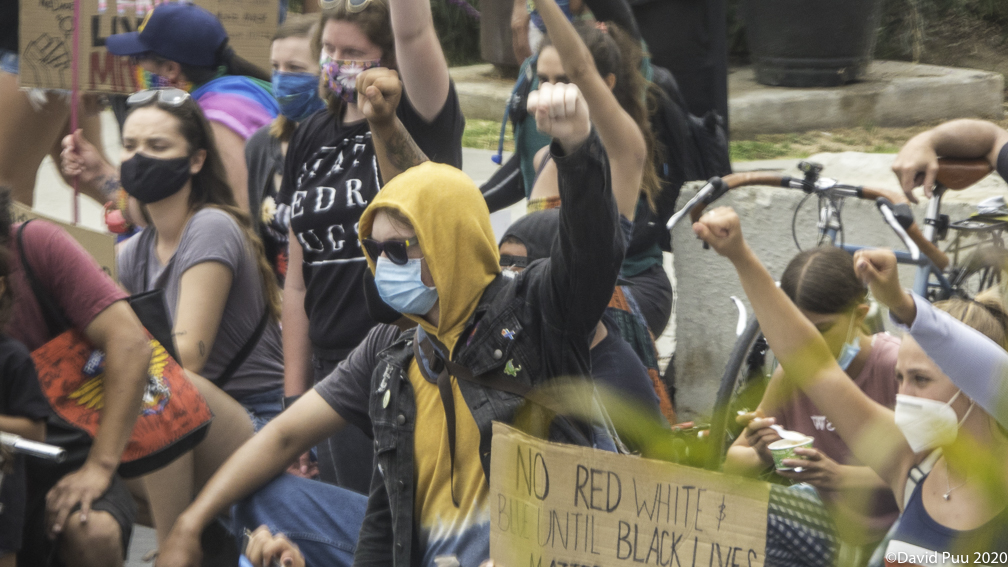 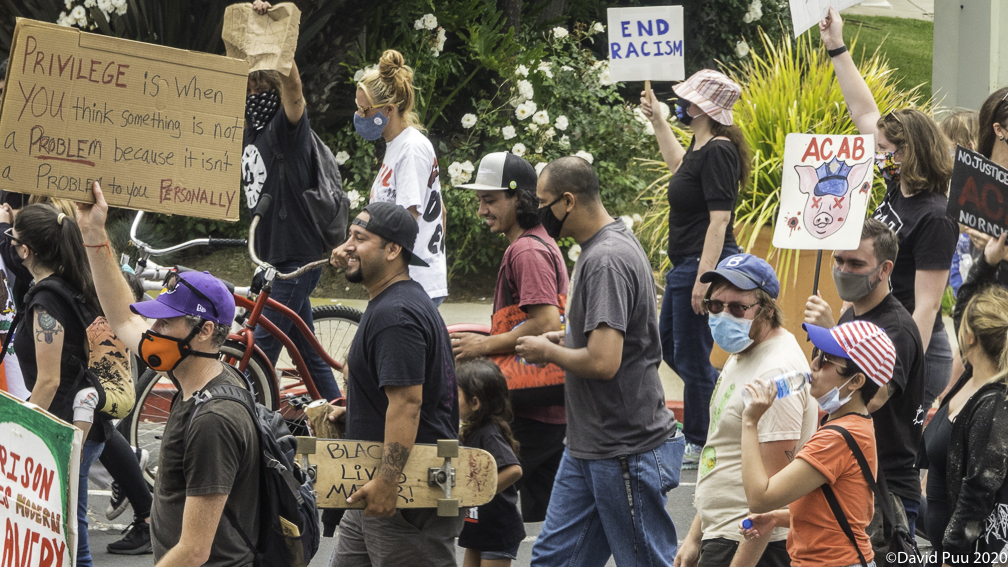 People stay away in droves.

This is Small Business murder.

That action leads towards the potential loss of a massive economic segment, and community stabilizer.

Our retail operation which has been in Downtown Ventura for close to 15 years, saw it’s slowest 4th of July ever.

Several other businesses opted to close for the day, knowing what headed in. 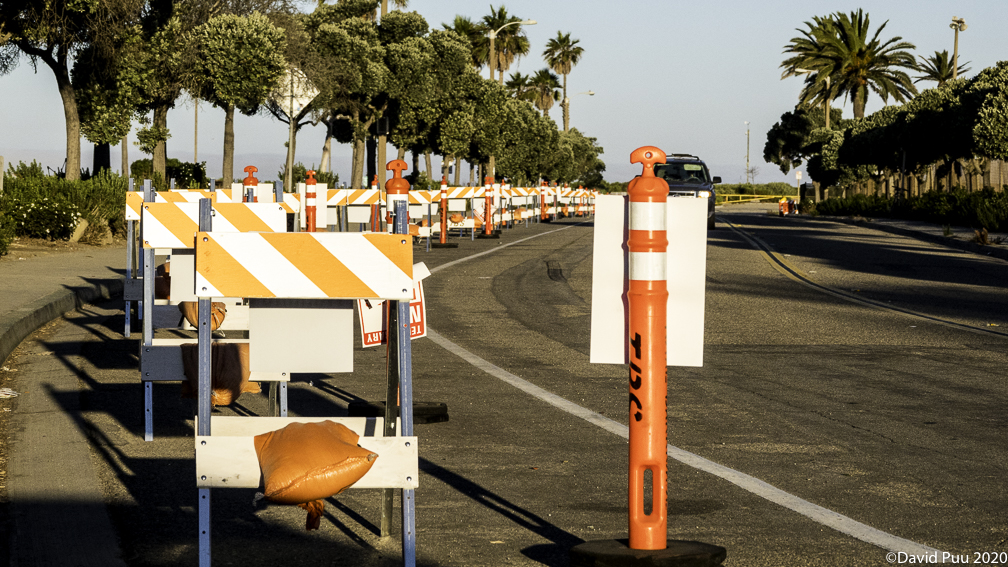 I saw no one protesting the beach closures, where State Lifeguards, VPD, Park Rangers and Sheriff’s engaged in a  tactical response against the public over the Holiday week end.

I spoke with one surfer who got a $360.00 ticket via VPD for checking the surf at Schoolhouse Jetty.  The Officer refused to listen to him at all according to the man.  The surfer said that he pointed out that he had no idea why there were orange cones in the street, with no accompanying signage, and that he was merely checking the surf from his truck.

I personally experienced one such response first hand on Friday. I was shooting an image of vacant beach parking while standing next to the open door of my truck. Having worked in Journalism for a very long time, I understand the rules well. I managed to stand the Sheriff officer down by using a de escalation technique. I will refrain from comment regarding his actions and demeanor.

I have not checked, but I am pretty sure that State, County and City did not apply for a waiver of the California Coastal Access Act for this recent sudden closure of both the beaches and adjacent parking. Both actions were tantamount to creation of shuttered access to the Ocean.

This carries far more dire implications than one may at first understand, as it involves stripping away of essential liberties in the elimination of access to the Commons, by executive fiat. Then there is the expense. The Public is paying to have their rights violated.

The irony that this occurred during the National celebration of Independence Day, which marks the moment when Thirteen Colonies announced their independence from Fiat Rule by England, should be noted by all. 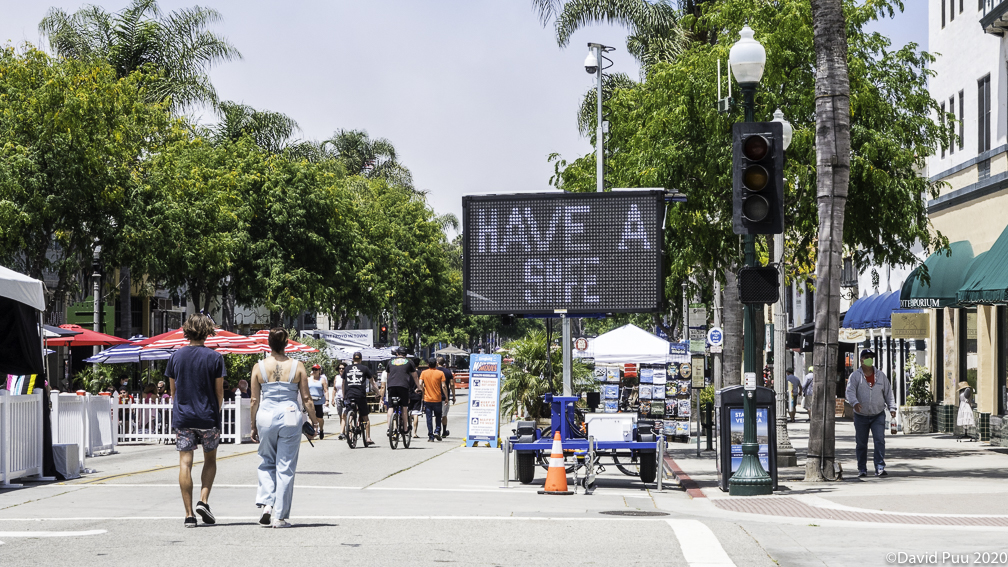 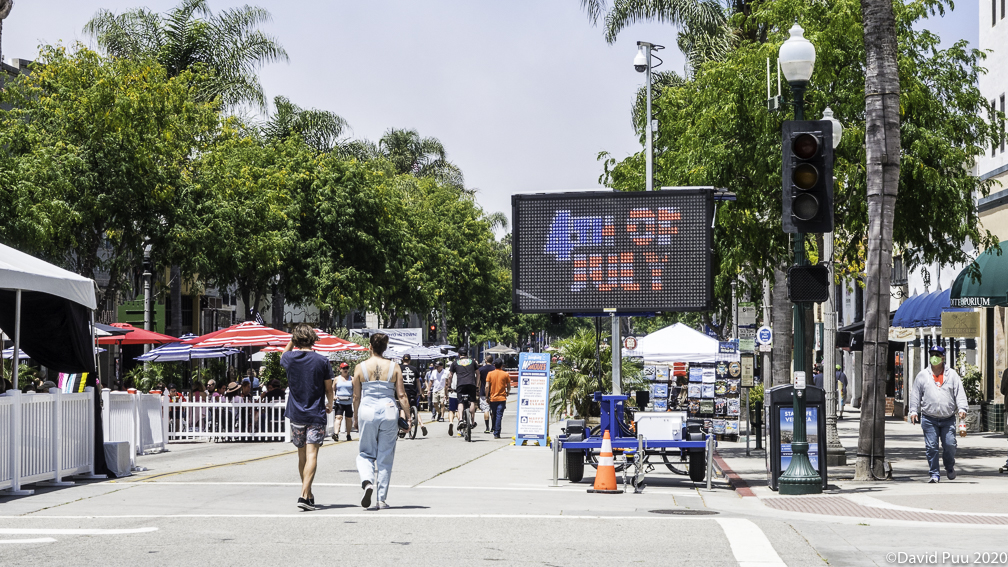 With regard to VPD actions in and around Downtown, I have seen an extremely high level of professionalism in conduct. It is admirable. I got to speak with some of them as they staged Saturday morning. I watched as people approached the officers, and thanked them for being on duty. 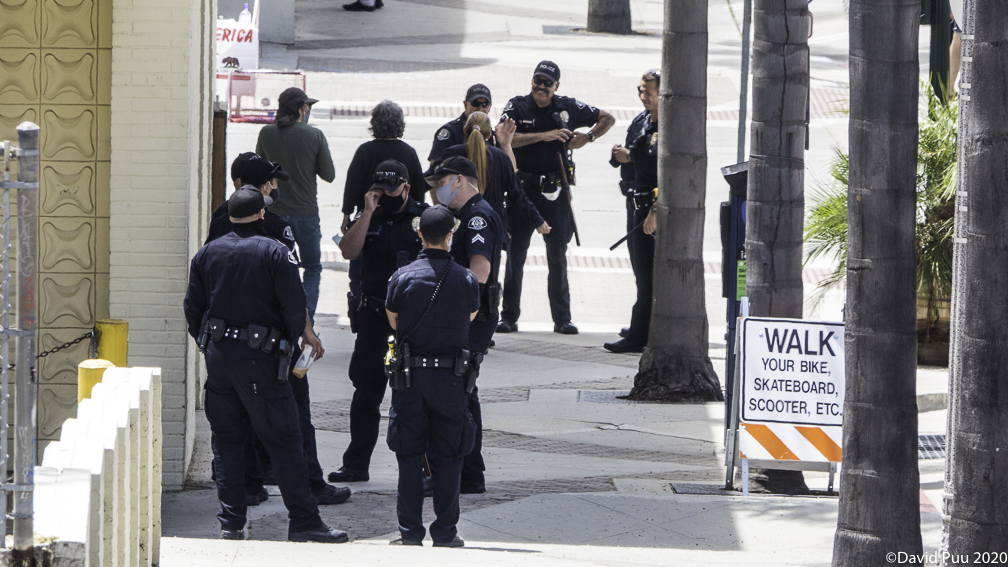 And so it goes. Lawlessness is expensive. Whether it is authored and engaged in by Governance or the Public, we are all going to be charged in ways we likely never imagined, as long as this all continues.

We will get to witness the Law of Unintended Consequences play out in our Community.

It is nearly 10PM on the 4th of July, and I am sitting in my home office at the end of a long day observing my City and Community. Outside as the light of a full moon intensifies, the neighborhood kids are running amok, while fireworks explode as far as the eye can see.

People may have stayed home for the most part this Holiday, either by request or order. That really does not matter. They got together in small groups in their homes and celebrated the Holiday.

As our house shook from the reverb of the fireworks, and the kids outside laughed and screamed on this warm Summer night, I realized that this made me feel better about where we are as a people. That some semblance of sanity and normalcy still existed amongst us.

I resolved to focus on that.

This is why Tradition and History Matter: they inform our Future. Never assent to their removal by Government or Mob,  because if you do, your own Liberty is next. 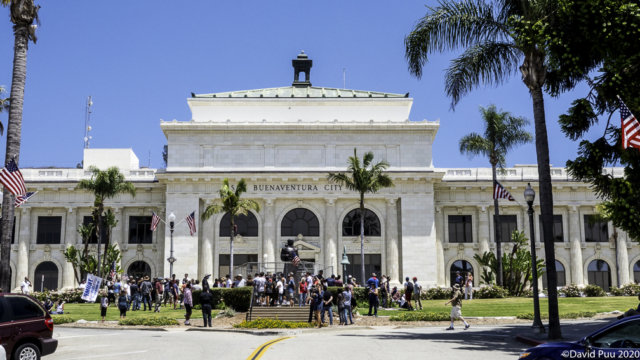 The protesters are spreading the virus and people who are minding the rules are punished. Their message is diluted.

I’m not Catholic but there’s reason to keep the statue of Serra. Certainly there are arguments for and against the history behind Serra’s life an what it meant to the indigenous people’s living in California and there are those who consider him a Saint.That to me is not the argument.

IT IS A STATUE, not the person, that represents a portion of California history (warts and all), much like the statues of Civil War Generals represents Antebellum. Learn from it an teach your children, even if public schools fail to do so.

Don’t allow terrorists to deny you of a portion of history.

It’s hard to distinguish the demonstrators from the marxist that have hidden themselves in the crowds until they act up, creating a scene that is choreographed ahead of time to make the biggest impact.

I see a lot of ignorant people being played.