Ineligible Persons Registered to Vote in California Nearing One Million

registration database of February 8, 2019 and compared these figures to the Secretary of State’s estimates of eligible citizens from February 10, 2019. 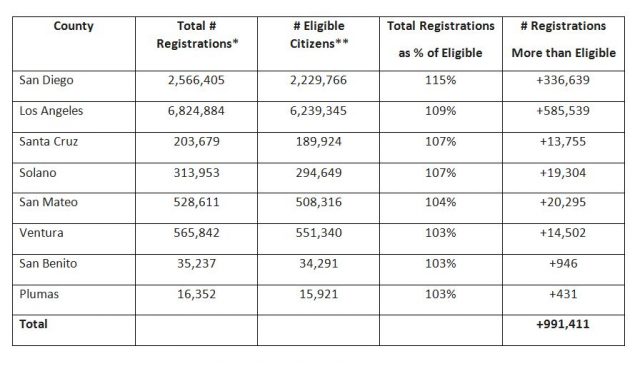 Since EIPCa published this analysis in 2017, three counties (San Francisco, Imperial and Lassen) have dropped off the list, with San Francisco County posting the largest improvement.

Unfortunately, three new counties (Ventura, San Benito and Plumas) have been added to the list because their registrations have grown to 103% of their eligible populations.

Inactive-status registrants are those who have been inactivated by their county due to lack of voting activity and/or lack of response to contact attempts. Though they do not receive voting materials or vote-by- mail (VBM) ballots, Inactive registrants are eligible to vote in any election.

Excess Inactive registrants can open the door to voting fraud since these registrants (who may have moved or died) are not likely to monitor their old voter registrations. EIPCa and Washington D.C. based law firm Judicial Watch negotiated a successful legal settlement in 2018, requiring Los Angeles County to begin the cancellation process for as many as 1.5 million Inactive registrants. The Settlement Agreement also requires the remaining California counties to follow federal list maintenance laws.

Unless the county addresses these 300,000 Actives– who may have moved away or died– they will all be mailed VBM ballots and this will increase the risk of voting fraud in the county.

“We at EIPCa are pleased that Los Angeles County has begun complying with our settlement agreement and has already mailed notices to almost 1.6 million Inactive registrants. We are also happy to see progress in counties like San Francisco, which appears to have lawfully removed over 80,000 of its

Inactives,” said EIPCa President Linda Paine. “It remains unacceptable, however, that almost one million ineligible people are registered to vote, especially in light of the Voters Choice Act requirement to send vote- by-mail ballots to everyone on the active voter rolls. EIPCa will continue to press for accurate voter lists and hope that these figures will quickly improve when all counties come into compliance with the law. California voters deserve clean, up-to-date lists so they can have confidence in the integrity of our elections.”

EIPCa is a non-partisan, non-profit, volunteer organization. For over 8 years it has researched and observed California elections to provide citizen oversight to ensure that the state and its counties are complying with laws that protect the integrity of elections. For a full list of counties, go to: eip–ca.com.