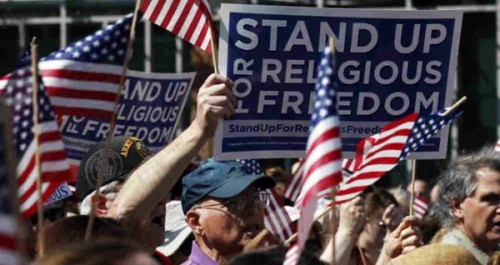 The secular world is becoming more and more intolerant of Christ professing and Bible believing persons. This is happening in Finland, but could and will happen throughout the Western world including the United States as secularism becomes more and more dominant, more and more tyrannical.

Bishop Juhana Pohjola and Parliament member Paivi Rasanen face fines and up to two years in prison under “hate crimes” laws that effectively criminalize speech and set the government up as the arbiter of what religious beliefs are legal in Finland.

Rasanen and Pohjola have each been interrogated for hours by Finnish officials for stating beliefs that Christians have held for thousands of years. They will stand trial in January.

Pohjola is the bishop of the Evangelical Lutheran Mission Diocese of Finland. His alleged hate crime is publishing a 2004 booklet written by Rasanen about the Bible’s teachings about sex and marriage. Years after the publication of that booklet, Finland passed laws creating legal privileges for LGBT citizens, under which the two Christians are now being accused of “incitement against a group of people.”

The Bible clearly states that the advocation for modern-day views on sex and marriage, and modern-day views on crime and murder (abortion) are against the will of God. Those of us who oppose these modern-day views will be persecuted per the teaching of Christ. God has already shown us that he considers these views as abominations. These views have existed long before today. They existed in the days of Sodom and Gomorrah. God does not adjust his views to accommodate communism, secularism, and Islam. The view God held of these modern-day anti-Biblical and Democrat views, has not changed. Yes, the world will condemn us and persecute us who profess Christ and believe in the teachings of the Bible. God will and has dealt with those who hold the view being promoted by the modern-day Democrat party.

I think your article is very accurate. I believe that more Democrats will have their eyes opened to what their party is truly doing. There are also many sick RINOs out there as well that need to be removed from office along with probably 99% of the Democratic party. I believe that the government must stay out of the affairs of Church. The true Bible believing, God fearing, washed by the Blood of Jesus Christians help people who are in need. This Nation is only about 3% of the world’s population but yet we send out 97% of the Gospel of Jesus Christ to the entire world which includes feeding the poor and helping them by drilling wells for clean water, clothing them and teaching them a skill to make a living and how to grow food. All the Democrats want to do is open our borders to illegals and traffickers and people who are terrorists. The Dems want to destroy America along with the Cabal and Illuminati and George Soros, Bill Gates, Clinton Foundation, the Clinton’s, Bush Sr. & Jr., Obama, Biden family, Pelosi, Schumer, Waters, Adam Schiff, Fauci, Epstein, Gov. Cuomo, Gov. Newsom, Gov. Whitmer, and so many others. That doesn’t even cover other Nations’ Cabal leaders like the Crown and Justin Trudeau just to name a few. This is a very deep and far reaching subject because the evil has gone on throughout the beginning of time after Adam and Eve fell. Satan’s goal is to kill us all and enslave as many as it can. Satan is a fallen angel that was thrown out of Heaven like lightning and when God made Man, Satan has tried to get rid of humanity and it uses other humans to serve it’s purpose. The reason Satan uses people is because it cannot create anything but God did give that ability to mankind.

The Bible says that the end days will come with Christians attacking everything Christ taught.

With the Republican party attacking immigrants, demanding that the needy starve, supporting exorbitant costs for healthcare despite their own Economists showing it costs more than what the entire rest of the free world does, spreading hate and vitriol, and when they are caught “bearing false witness” responding that others do it also — even if they can’t prove it after 20 years of investigations and BILLIONS spent on the attempt…

Well… the Bible tells us that Republican Christians will cause the end of days and drag those who would be faithful to Christ into sin and everlasting despair, so I guess we shouldn’t be surprised at articles like this.

You just make it up as you go . The Bible says nothing about republican Christians. We’re not demanding illegals starve . You lie !!!

I am not a particularly religious person. The last time I was in church was for my parents’ 50th wedding anniversary renewal of their vows. That was in 1986. One might reasonably assume from that sparse attendance that church going is not high on my list of must-dos.

That said, I am concerned about the repeated attacks on religions of all kinds that were the foundation of this nation from its early years. It is my view and the view of other strict constructionists that the First Amendment does not demand freedom from all religion but merely freedom from state sponsored religion. When JFK was running for the nomination there was rumored speculation about his affiliation with the Roman Catholic Church and whether he would be taking direction from the pope. I think he quickly put that political rumor to rest. As it should be. All we have to do is look through history to see how distorted life became when religions ruled the country.

But the moral principles of most religions are the basic foundations for how we interact with each other.

Before we are so quick to reject a vein of religion in our lives and to castigate folks for whom religion is a deeply ingrained part of their lives, I would suggest to keep in mind the following:

“First they came for the Jews
and I did not speak out
because I was not a Jew.

“Then they came for the Communists
and I did not speak out
because I was not a Communist.

“Then they came for me
and there was no one left
to speak out for me.”
Martin Niemöller