Most Americans are not old enough to remember the Great Depression, which lasted from 1929 to 1939.

During that era, American unemployment reached 25 percent.  An additional percentage was underemployed. 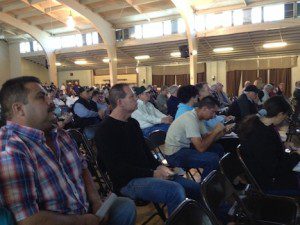 Citizens also lost their homes and life savings.  Banks failed, and depositors lost their money.  Industrial production collapsed.  People had no money for food, rent, or the home mortgage.  Between 1929 and 1932, the value of stocks dropped 90 percent.

In 1932, Franklin D. Roosevelt, the Democratic governor of New York State, ran for president, promising a “New Deal” for Americans.  Roosevelt was overwhelmingly elected president.  He went on to be elected again — in 1936, 1940, and 1944.

Is the current economic crisis in America different from the Great Depression?

In February 2020, unemployment was at 3.5 percent of the workforce — the lowest percentage in 50 years.  The stock market was booming.  Americans were buying homes, cars, and appliances.

By March 2020, the coronavirus pandemic had set in.  Restaurants, bars, and movie theaters, closed.  Sporting events were canceled.  Long lines appeared at supermarkets and banks.  The stock market lost all the gains it had made since Donald Trump became president on Jan. 20, 2017.  Thousands of people with COVID-19, the disease caused by the corona virus, became ill or died.

On Mar. 20, 2020, 3.3 million Americans, according to the U.S., Department of Labor, filed claims for unemployment insurance.  One week later, on Mar. 27, 2020, another 6.6 million filed such claims, bringing the total number of claims to almost 10 million.

Then, on Apr. 2, 2020, another 6.6 million Americans filed more claims, bringing the total number of claims to 17 million.

No one knows how high future claims will go

What should America do?

Economics is not an exact science.  No one can run controlled experiments, such as giving half the population a tax cut and giving the other half no tax relief.  With a controlled experiment, one can see if the people getting the tax cut did better than those not receiving such a benefit.

Some economists recommend cutting interest rates.  This has already been done.  In March 2020, the Federal Reserve, the nation’s central bank, cut interest rates to about zero percent.  At some future time, observers will presumably be able to determine if the reduction in interest rates made a difference.  Low interest rates might mean that consumers can more easily buy homes and cars.

Cutting interest rates can be similar to having the federal government print more money.  (Actually, the printing is now done by some computerized method, but the effect is the same as turning on printing presses.)

In today’s America, government is under huge pressure to do something to stop job losses.  In late March 2020, Congress passed and President Trump signed a bill to spend $2 trillion of federal money.  The hope and expectation are that the economy will return to normal.

A possible problem with spending more federal dollars is that the nation is already $23 trillion in debt.  No one can be certain what a higher level of debt might mean.

The year 2020 is a presidential-election year.  Presumably, no candidate for president wants to see something like 20 percent or 30 percent (or more) unemployment.

The 2020 presidential election may be the most important election in decades.  One can ask the question:  Why, at a time like this, would anyone want to be president of the United States?