CA 25CD Rep. Katie Hill, a Democrat, was forced to resign today for alleged: violation of House rules on sexual relationships with staffers, other personal indiscretions and compromising situations, naked photos on sex websites, fueled by alcohol and drugs. Campaign and government funds were allegedly used to finance some of this. It appears that her continuing service in Congress, particularly on undeclared impeachment hearings, was untenable and distracting. We don’t know what role, if any, that Congressional leadership had in her resignation.

It appears that the situation festered for years, but came to a head when her now ex-husband Kenny Heslep believed that she was conducting a clandestine affair with a male staffer, Graham Kelly. He then informed media. Hill and Heslep allegedly had a years long “throuple” (new term to us, but it involves “threesomes”) relationship with staffer Morgan Desjardins.

Until recently, only Conservative media and bloggers, such as Santa Clarita immigration activist Greg Aprahamian, ran with the story. But the dam finally broke when British MSM (MainStream Media) newspaper The Daily Mail blasted out a sensational feature length article with damning pictures late last week. This forced the U.S./ MSM to pay attention, leading to today’s situation.

Hill’s resignation letter, below, appears to place the blame solely on her ex-husband and opposition political operatives. 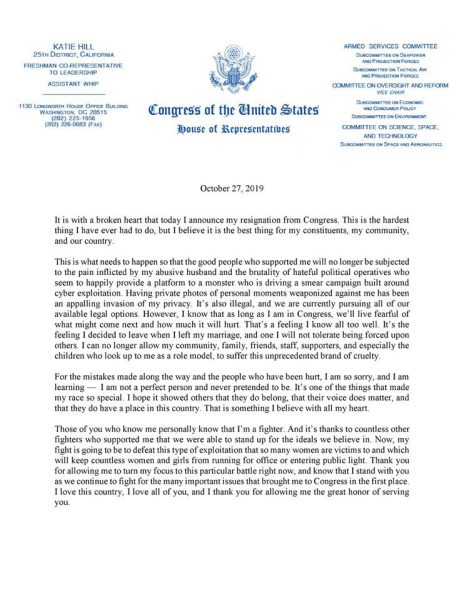 However, other news stories tell of her bizarre, highly compromising  sex life, involving Hill, her husband, an aide and a campaign worker. There is much more, but thankfully and hopefully, this will end.

Political opposition definitely jumped on the story and exploited it to the fullest. Do you think this was appropriate? Opposition used the scandal as leverage and was really more concerned about her voting record and political activities, which are considerably to the left of the District and past representatives. The CA 25CD seat had been in Republican hands since 1992, when Buck McKeon occupied it. The Democrats took over quite a few “swing” districts to assume control of the House in the 2018 mid-term elections. It remains to be seen whether 25CD will revert to Republican hands next year, but it should be a crowded, interesting race, with lots of issues. There are already 7 declared candidates.

Hopefully voters and media will pay more attention this time to who the candidates really are, what they represent and what they have done.

AUDREY CONKLIN REPORTER   Democratic California Rep. Katie Hill resigned Sunday after allegations of inappropriate sexual relationships with staffers surfaced, as well as the announcement of a House Ethics investigation. “It is with a broken heart that today I announce my resignation from Congress,” Hill wrote in her statement. “This is the hardest thing I have ever had […]