While the national environment of high gas prices and inflation, along with Joe Biden’s other failures have given the national Republican Party a boost in energy, the CA GOP convention stood in stark contrast to other states. This was encompassed in Minority Leader Kevin McCarthy’s 45 minute Saturday night speech, in what he chose to highlight and what he chose to omit.

If you put me in Florida, I would be a proud registered Republican. In California, the failure of the state party gives me some pause to that registration. A lot of pause. In fact, one of the key moments was McCarthy’s admission that California stood far behind its East Coast sunny counterpart, where many have emigrated to, as he lamented California Republicans not getting enough attention for technicalities like winning back 4 seats in 2020.

McCarthy’s “bragging rights” moments glossed over important realities. 7 seats were lost in 2018 and those 4 were clawbacks. Meanwhile, all 4 seats were won by 2 percent or under in 2020, signifying California’s overall bluing trend that remains unchanged. No mention of last year’s 24 point recall lost was made.

In a few far and between moments, McCarthy brought up some applaud-worthy points. These included a few shoutouts to the terrible economic environment the national and state Democrats have fostered with their policies, while tying it into California’s hypocritical “environmentally conscious” policies. “It’s not just Joe Biden. It’s our own governor. He decreased production in California. Yes, oil and gas by 20%. That’s 87,000 barrels a day. He replaced it with 50,000 barrels from each of California hardworking taxpayers’ money, and is giving it to poor spending.  If you care about the environment like the California Republican Party does, American natural gas is 41% cleaner than Russia natural gas.”

But the overall speech was canned and sounded overly rehearsed especially in light of his recently surfaced comments about the former President who he made a point to do some damage control tonight with a shoutout.  “President Trump helped build the strongest economy in our nation.”

When CBS asked me about my thoughts on his comments and how that would affect his aspirations for speakers, I chalked it up to DC gossip but the bigger picture point is Kevin McCarthy is not loved by the grassroots and is seen as out of touch and a typical politician. So that piece of news did not surprise me, being in line with his current brand.  McCarthy is too Washington DC. And like the state GOP which has been modeled after his likeness, it continues to miss opportunities left and right, literally.

McCarthy did get to mentioning some on-the-ground issues but only as talking points without much-needed depth. “Inflation [needs] to stop. [People] want gas they can afford. They want to be involved in their kids’ education. They want the streets to be safe no matter where it is in the city.” That’s as far as he went. I would have loved to hear a shot at the Sacramento Democrat legislature shooting down the gas tax holiday in their “let them eat cake” moment but instead McCarthy read out resumes of the 4 Republicans who won last cycle in Congress. Also missing were their current legislative accomplishments. Even as a minority party, I want to hear common sense solutions or at least a record of attempts to force Democrats’ hands in Washington to reveal that their focus is not what’s best for the people.

McCarthy opened up his speech by honoring the person who introduced him, state GOP chair Jessica Patterson. “It was the Republican Party of California, not the Democratic Party that elected the first millennial Latina to run.” These were his exact words and made me cringe. As if her age and race make her qualified. Meanwhile, on the ground, everyday Californians are not crazy about Patterson’s leadership as many issues that affect the people and inspire them are glossed over for never ending calls to fundraise.

These issues include conservative ballot measures like Prop 16 in 2020, where state voters turned down affirmative action (also known as race baiting or race based quotas in public sector schools and hiring), by 14 points, the Republican leader was acting just like the left on feeling the need to check every intersectional box in his speech.  Republicans instead have an opportunity to come ahead in the issue of race, by pushing meritocracy which is being trampled on in hiring, college admissions and now even admission to prestigious high schools, previously merit based.

The biggest complaint about the GOP, which has a lot of merit, is they’re stuck in the 1990s. As far as California goes, we have had the race thing settled, or at least harmonious, for decades. Yet, as a minority-majority state in 2022, McCarthy sounded like he was cheerleading for battles won even before that. In this post-racial world, especially in California, it highlighted how out of touch the Republicans are, as he and the convention kept trumpeting the likes of Young Kim or Mike Garcia, not on the merits of their work but because they’re checking off intersectional boxes. It came off like a desperate affirmation that “we are not racist, I swear! Let’s count the ways we are not”.

Where McCarthy was able to balance it out was when he was speaking about Emmanuel, a German immigrant’s painting of America’s founding fathers in a rowboat, where he joked that it was historically inaccurate and the river looked more like the Rhine. “He knew America was more than a country. America was an idea. And he wanted to share that idea with his country of Germany. He wanted them to have a revolution based upon the freedoms of what America was created around.”  Even then, with this powerful story, he had to check off the fact that there was a black man and a Native American on that boat. In real life, I do not introduce my friends to others by their race and don’t appreciate being called “Hi, this is Marc, my Asian friend”. I prefer not to cringe.

It’s like McCarthy couldn’t help himself.  And isn’t that what the left capitalizes on, and where they trip themselves up? If you’re constantly bringing up race, isn’t that kinda racist itself? Let’s be better than this, GOP.  Let’s strike a real contrast.

Finally, being an “I’m not the other guy” is good enough to win for Republicans in a cycle but reversing long term trends is the real task conservatives need to fight.

I didn’t see fresh ideas or a truly inspiring message from the Republican leader in California. It stands in stark contrast with Florida, where DeSantis really is just crushing it like a boss, putting himself in the forefront on issues from Critical Race Theory in schools to pro-life causes.

While Florida is just as multicultural as California, I don’t hear DeSantis focused on skin pigmentations and body parts in his speeches and actions. Nor do I get the sense that DeSantis is trying to create a club of elites, as we have in California. McCarthy, focus on what you guys are there to do: a job, to further our values. It seems that the California GOP is stuck on glory displays over true productivity of explaining why conservative ideas work. Instead, they’ve functionally become an elitist clique or club with access that is not available to the everyday person.  And that is why they will continue to lose at the ballot box, until the reservoir of opportunity is tapped into, that is the common everyday man and woman in California. 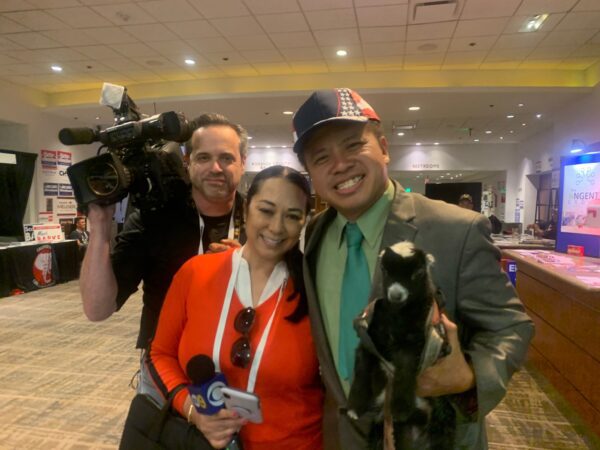 Marc Ang ([email protected]) is a community organizer in Southern California and the founder of Asian Industry B2B. He focuses on the minority conservative experience. Marc’s book “Minority Retort” will be released in early 2022.

Bravo Mark Ang for an awesome take on McCarthy and his speech! Yes, the grassroots is fuming (another California Wildfire!) and we are not happy with the prospect of his slide into the Speaker’s chair should we win in November. We need a better representation of our Conservative caucus in California…and this “California Boy” is not it!