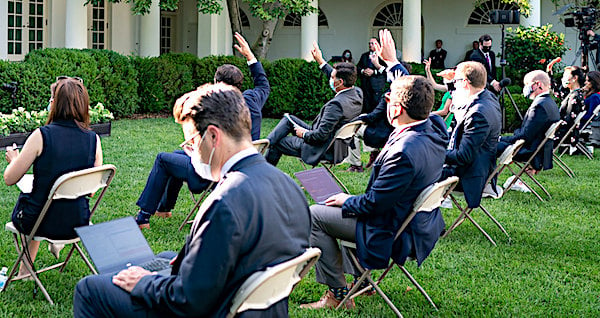 It’s likely no one in America in A.D. 2022 can be unaware of the bias of the legacy media – those newspapers, networks and such – toward leftists and Democrats and against conservatives.

They’re the ones who suppressed that reporting about the Hunter Biden laptop prior to the 2020 election, likely changing the outcome of the vote. They’re the ones who haven’t covered the Biden family access-for-sale agenda. Nor a number of other scandals.

And they’re the ones who promoted, for years, the debunked “Russia collusion” claims that we now know were made up at least partly in the pay of the Hillary Clinton campaign and that Barack Obama knew all about.

But that media now has moved much further, according to a column by Tony Perkins, chief of the Family Research Council organization.

He cited, online, “an outrageous feature on state election reform by Nicholas Riccardo” that was so “nauseatingly partisan that it read like an internal strategy document from the DNC.”

The reporter insisted that the GOP’s effort to protect vote integrity in various state laws, “isn’t an effort to save democracy — it’s a plot to subvert it. And January 6th, he wants readers to believe, was just the beginning,” Perkins wrote.

The article quotes former Democratic operative Mark Brewer charging that Republicans are “laying the groundwork for a slow-motion insurrection.”

Perkins explains that’s “ludicrous,” but AP, is “passing it off as fact.”

“To suggest that people who are changing the laws — or using the process to reinforce the laws that already exist — are trying to overthrow the government isn’t just biased reporting, it’s dangerous reporting. Taking the earnest efforts of citizens and wrapping them in a loaded term like ‘insurrection’ is like the AP taking a pitchfork to democracy.”

He concluded the article, which he said was like reading the satire site The Babylon Bee, “shows that the AP is no longer really a newsgathering organization. It’s as bad as MSNBC.”

Perkins explained the Democrats’ pending For the People Act “topples two centuries of fair and honest elections in this country,” and “the Left has been quietly chipping away at voting integrity for years — systematically rewriting election rules to make it easier to cheat with things like ballot harvesting, mail-in voting, third-party election funding, and so much more.”

Yet, he said, “the AP would have you believe that it’s Republicans — not these Leftists — who are the ‘anti-Democratic force.'”

State lawmakers are trying to add common-sense voting requirements like voter ID because, as von Spakovsky explained, that is something “that benefits all voters — no matter which political party they support.”

To call cleaning up voter rolls “‘an insurrection,’ has got to be one of the most absurd things I’ve ever heard. And yet this is written as a serious article by the AP,” he said.

Perkins noted that the events of the 2020 election proved “there are major vulnerabilities in our election system — many of which were exploited, thanks to COVID. And anyone who doubts that these issues exist can check out Heritage’s new election integrity scorecard and read the detailed ratings of every state.”

Perkins continued, “There’s a lot at stake here — and both sides know it. Why would the Left come at engaged citizens with both barrels if they weren’t afraid that everything they’ve been working toward — relaxing the rules and corrupting the process — is in jeopardy? The American people are determined, as are local legislatures, to fix these loopholes. That’s why the Democrats are desperately trying to preempt these states and take this debate to the federal level. And while we’re grateful for the work of Senator Mitch McConnell (R-Ky.) and other senators who’ve stood strong, Americans aren’t out of the woods on this one.”

He said what’s needed now is for state lawmakers to hear from constituents – and be encouraged to continue fighting for election integrity.

“The bottom line is this — don’t be influenced by what the legacy media is saying, and just as importantly, don’t back down,” he said. “The Left wants to scare people away from action by using terms like ‘insurrection,’ making you feel like you’re a criminal for exercising your constitutional rights. Don’t let them.”