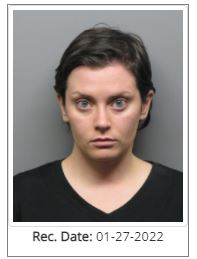 Married couple arrested for robbery and conspiracy.
On 12/24/21, at approximately 9:15 pm, patrol deputies from the Thousand Oaks Police
Department responded to a robbery that had just occurred. The victim met the female suspect
on an internet site, where males meet females who are interested in finding someone to provide
them financial support and arranged to meet at a local hotel. The victim and female spent time
together at the hotel. After some time, the male suspect arrived at the room and proceeded to
use a weapon to batter the victim before taking a large sum of money and property from the
victim. The suspects fled together from the hotel.

On 01/27/22, detectives from the San Ramon Police Department contacted both subjects at the
hotel. At the time of contact, Jonathan Perez was found to have a loaded firearm on his person.

Both subjects were arrested by the San Ramon Police Department for robbery and conspiracy
warrants issued out of Ventura County and booked into the Contra Costa County Jail.
The Sheriff’s Office would like remind people of the dangers of meeting and engaging with
subjects via these types of internet-based arrangement sites. Often times these subjects are not
who they claim to be and are looking to victimize individuals. If anyone else has been the victim
of these subjects, they are encouraged to contact law enforcement to report the incident.