There is little time in war to savor victory — all who have fought in battle know that. Army Pfc. Joe Hastings nearly single-handedly pushed back the Germans from a stronghold in the waning days of World War II, only to die a few days later. While his triumph and life were short-lived, his bravery will forever live thanks to the Medal of Honor.

Hastings was born on April 8, 1925, in Malvern, Ohio, to parents Shirrel and Mary Hastings. He had a younger sister and two brothers, the oldest of whom died at just 16. The family moved to Chicago for several years at some point, but they moved back to nearby Magnolia, Ohio, in time for Joe Hastings to graduate from high school.

World War II was raging by then, so Hastings joined the Army in July 1943 shortly after turning 18; he was with the 386th Infantry Regiment, 97th Infantry Division. The 97th originally trained for amphibious assaults in the Pacific, but after massive losses at the Battle of the Bulge over the winter of 1944 -1945, they were sent to Europe in March 1945 as relief for depleted troops.

By April, the division had pushed its way about half an hour east of Cologne, Germany, to an enemy stronghold called Drabenderhohe.

On April 12, the Allies attacked the town. As a squad leader with Company C, Hastings was in charge of a light machine gun section that was supporting two platoons pushing into the town’s defenses.

As machine guns, mortars and other direct enemy fire rained down on them, Hastings fearlessly ran more than 350 yards through open, rolling fields to reach a position critical to gaining the upper hand. From there, he was able to kill the crews of a 20-mm gun and a machine gun, and he drove several dug-in riflemen out of their hiding spots. His actions allowed one of the platoons he was protecting time to reorganize and move the wounded to safety.

The second platoon wasn’t doing so well. Hastings noticed they were being hit hard by heavy 40-mm and machine gun fire. He immediately ran about 150 yards to the leading elements of that unit and killed the 40-mm’s crew.

Now in front of the platoon’s attack, Hastings pushed farther into enemy territory, firing his gun from his hip and ignoring the many bullets that whizzed past him. He didn’t stop until they had made it to their objective another 175 yards away. His hard work and bravery cleared the path for his company’s advance into Drabenderhohe.

Sadly, Hastings was killed four days later during another battle on April 16. The German forces surrendered to the Allies less than a month after that.

Hastings’ body was returned to Ohio, and he was buried in Magnolia Cemetery.

The 20-year-old’s nomination for the Medal of Honor was pushed through quickly. On Nov. 8, 1945, Hastings’ mother, Mary, accepted it on his behalf from Army Col. F.R. Ostrander, the commanding officer at Fletcher General Hospital, an Ohio medical center where many war vets went for treatment and rehabilitation.

While Hastings’ life was cut short, his memory has lived on. In 1947, the Army transport ship Coastal Crusader was renamed the Pvt. Joe R. Hastings in his honor. A now-closed Army Reserve center built in the 1950s in Canton, Ohio, also bore his name.

This article is part of a weekly series called “Medal of Honor Monday,” in which we highlight one of the more than 3,500 Medal of Honor recipients who have earned the U.S. military’s highest medal for valor. 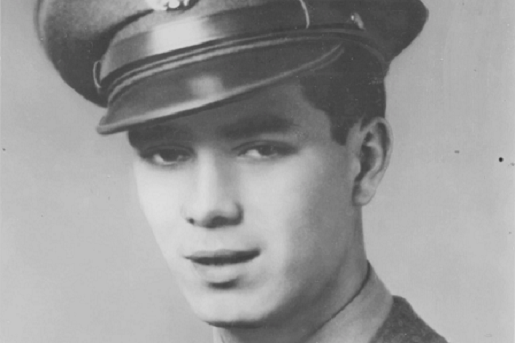