An advertisement being circulated on social media in Honduras is encouraging a new caravan of migrants to depart the nation’s capital, San Pedro Sula, on Jan. 15.

The ad calls for people to convene at the main bus terminal in the city at 5 a.m. to head north.

Some local media in Honduras are posting the ad, which had been used in 2019, on their Facebook pages.

“We are going to the USA,” commented David Rivera Villanueva. 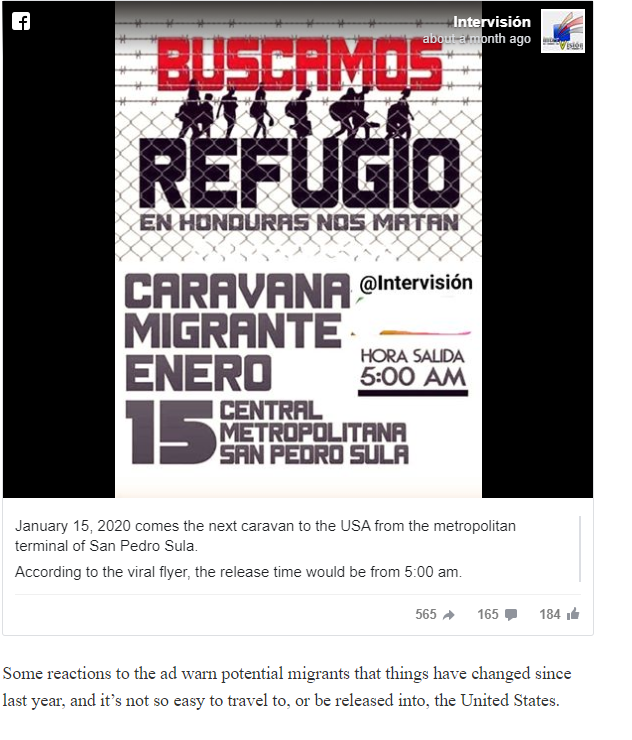 Some reactions to the ad warn potential migrants that things have changed since last year, and it’s not so easy to travel to, or be released into, the United States.

During the first six months of 2019, Mexico had essentially no security on either its southern or northern border.

But after President Donald Trump threatened to hit Mexico with tariffs, the government formed a National Guard tasked with securing its own borders and stopping the unfettered flow of migrants from Central America.

“The National Guard will be waiting for you here!” wrote Facebook user Mayte Estrada.

“In Chiapas you won’t be able to cross as last year, so don’t waste your time,” commented Adan Perez, referring to a popular crossing location from Guatemala into the southwest state of Chiapas, Mexico.

New regional agreements and a “safe third country” rule mean the United States can deny asylum to those who enter the country without first applying for asylum in another country on their way north.

Other commenters said they would join the caravan.

“We are leaving, God above everything, everything will be alright, let’s go with faith in God that we’ll arrive,” wrote Edwin Jimenes.

Patti Zelayita said, “Yes, I’ll join you, we are leaving, there are no jobs here in San Pedro Sula, if you set up any business, you never prosper, the gangs kill you.”

Another user, Edgar Gomez, said: “Well, we are leaving. Here in Honduras there’s a lot of unemployment.”

However, several commenters said jobs do exist, including Alexandre Byrne, who said, “There are a lot of construction jobs here!”

Most migrants from Central America are looking for jobs and economic prosperity, which doesn’t make them eligible for asylum. To meet the criteria, asylum-seekers must prove that they are, or will be, persecuted by their own government based on one of several factors, including race, religion, and political opinion.

The number of Central American families entering the United States illegally has plummeted since hitting a peak in May 2019, when more than 84,000 were apprehended by Border Patrol.

The major deterrent has been the Migrant Protection Protocols, also known as the “Remain in Mexico” program.

The program slowly ramped up during 2019, and more than 55,000 illegal aliens have now been sent back to Mexico to await their immigration court cases. Previously, almost all families had been released quickly into the United States and had subsequently not turned up for their court hearings.

Mexico Secretary of the Interior Olga Sánchez Cordero said she had heard about the new caravan.

But she warned against those who want to transit Mexico to get to the United States or Canada.

“Those who only want Mexico to be a safe-conduct or a transit country, we don’t accept that,” Cordero said.