Curbstoning Cars: What It Is and How to Avoid It

A while ago, Nate came into our car buying office in San Diego with a story for us. After borrowing his roommate’s car for too long, he decided he needed to get his own ride. So, he started saving money and picking up extra shifts at his restaurant whenever he could. And he kept doing that for months and months on end. And all those months of hard work were rewarded when he saw a car with a nice and big FOR SALE sign posted on the side of the road. The Honda Accord in question wasn’t the car of his dreams, but it was definitely the price of his dreams. So, he called the number on the sign and talked to the owner, Kevin, who seemed like a great guy.

Kevin explained that the car was his daughter’s, but she didn’t need it anymore, since she’d just gotten married. “So she asked me to try and sell it for her,” he told Nate. The price? About half of what Nate had expected to pay for a used car. All of Nate’s prayers had been answered!

Unfortunately for Nate, two weeks later, he found himself in a broken-down car that would cost way more to fix than he paid for the car.

As it turned out, Kevin, if that was his real name, had sold Nate a “lemon” that he’d bought from salvage. After fixing it up just enough to look presentable, Kevin concocted up a fictional story of a daughter who no longer needed a car and sold the broken vehicle to our unsuspecting Nate. Afterwards, Kevin disconnected his phone number and ran off with Nate’s money, leaving Nate stuck with a car he couldn’t drive.

Our friend Nate was a victim of what we call “curbstoning.”

Unfortunately, Nate’s story isn’t a rare one. It’s one we’ve heard countless times before, and a lot more people across the country have had the same thing happen to them. What’s even worse is that curbstoners like Kevin are difficult to track down and punish.

Do you know what curbstoning is?

Curbstoning is when someone who doesn’t have a dealer license buys a car and resells it for way more than it’s worth. Curbstoned cars tend to have big problems that are hidden from the buyers. Of course, a problem can only stay hidden for so long, until the car breaks down and the buyer is stuck with it. 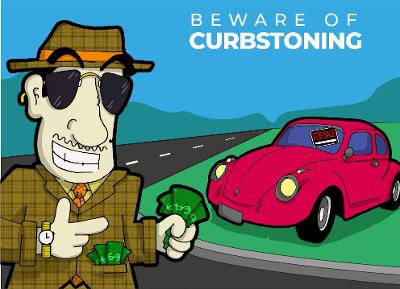 Where do these sales usually take place? Craigslist, OfferUp, and other sites. Typically, the curbstoner sells the car without transferring the title in their real name, which makes it hard to catch them. And since they aren’t a licensed dealer, they can’t be held liable like a car dealership. They don’t care about the poor person who they’ve scammed out of their hard-earned money.

The list of problems with curbstoned vehicles goes on and on: rolling back the mileage counter, paperwork issues, selling the car without even giving you the title, not disclosing salvage titles, a whole host of mechanical issues, flood or collision damage, and more. As if that’s not enough, a curbstoned car has often been sold multiple different times and the seller probably doesn’t have the car in their real name, so it’s hard for the buyer to get the car transferred into their own name.

What Makes Someone a Curbstoner?

Every state has its own laws about private individuals selling cars. In California, anyone can sell a vehicle “by owner” that’s insured and registered under their name. That being said, each state also has a limit on how many cars per year a person is allowed to sell. The limit in California is five cars.

After reaching that limit, a seller has to obtain a dealer license to keep selling cars. The problem is, curbstoners don’t follow the law and aren’t worried about getting a license like a reputable dealership would.

When a licensed car dealer operates under all the rules of the law, they have to pay a lot of money in insurance costs, not only for the vehicles they are selling, but also for their dealership property. They also have to pay for the dealer license and an official business license, on top of that. These licensed dealers have to obey all the laws in place that govern car selling, and they have to be vetted by the DMV. If they don’t obey the laws, they are held responsible.

Curbstoners don’t follow those same rules, and they don’t pay the same costs that licensed dealers do, making them an unfair competition that hurts legitimate businesses.

Curbstoners know that people don’t always like car salespeople. Everyone’s had or heard about an experience where a car dealership is pushy or sleazy, or tries to pressure a customer to buy a car before they’re ready. “Let me make you an offer,” says the guy in a cheap suit who you really want to leave you alone.

Curbstoners count on customers’ distaste for car salespeople. They let people have the relaxed and low-pressure experience they want to have, that they couldn’t get at a car dealership.

Just because someone sells a car without a license, doesn’t mean they’re a curbstoner. Here are some signs that they might be, though:

If a car’s title isn’t in the name of the person selling it to you, that person is probably a curbstoner, so you should be suspicious. Go ahead and ask them why it’s not in their name, and really listen to their explanation. If they try to tell you a story that can’t be proven, like, in the case of “Kevin,” they’re selling it for their daughter, who doesn’t use it anymore, you shouldn’t believe them. They’re probably lying, and they just don’t want their name tied to the car. Without their name being tied to the car, the curbstoner is free of liability.

Curbstoners do everything they can to avoid selling anywhere they have ties to. Why? They don’t want anyone they might know to recognize them, so they go to different places to sell their faulty cars. When you call them to inquire about purchasing from them, they’ll try to convince you to meet them somewhere in public, or just anywhere other than their home. Granted, this isn’t a 100 percent indicator that they’re a curbstoner, but your internal radar should be going off.

Did you see the car listing on a classified site like Craigslist? You should investigate further. If you look up the seller’s phone number and they have several different listings of cars, they’re most likely a curbstoner.

When buying a car, always research its accident and ownership history with Carfax. Many curbstoners will falsely claim that they’re the only person who’s ever owned the vehicle. Make sure you do your own investigative digging. See if their story and Carfax’s story line up. If they don’t match, one of them is lying, and it’s not Carfax.

When talking on the phone with a seller, tell them you saw “the car” that they’re trying to sell. But, don’t describe the car. Don’t give any specific or definitive details about it. If the seller can’t tell which car you’re calling about, they’re probably selling several different cars, which is a big red flag. Run in the opposite direction and never look back. You’re dealing with a curbstoner.

If the seller is a curbstoner, they’ll do everything they can to get you to buy the car without inspecting it. They’ll say that they’re offering you an amazing deal and you have to jump on it while you can. Don’t let them convince you. Get the car inspected, and if they don’t want you to get it inspected, there’s a reason why. That reason is probably that there’s a big problem with the car, and they’re a curbstoner trying to scam you.

Illegitimate sellers often say they’ll only take payments in cash. Don’t trust people who say this, because these people probably just don’t want their names to be tied to this transaction. Using cash eliminates any traces that could be used to lead back to the seller when you discover that they sold you a broken car.

Why is this person selling their car? How long have they had it? Is the warranty still good? These are the kinds of questions you need to ask, and a curbstoner probably won’t be able to give good answers to them. The question about the warranty is super imperative. If there’s still a warranty, you should ensure that you can have it transferred to you when you buy the car.

So, should you NEVER buy from a curbstoner?

Well, not necessarily. A curbstoner doesn’t actively want to sell you a bad car. They just don’t care if they do. They’re not trying to hurt you, but they don’t care if you get hurt. They just want money. It’s possible that you could purchase a good car from a private seller that’s in decent shape. However, just because it’s possible, doesn’t mean it’s likely. In most cases, you should avoid curbstoners and similar private sellers.

If you’re buying a car, spending the extra time and effort trying to find a legitimate seller is absolutely worth it.

What do you do if you’re the victim of a curbstoner?

The best thing to do is to never buy from a curbstoner in the first place. Unfortunately, too many people fall victim to curbstoning.

In the event that you find yourself as one of those people, call your local DMV and tell them what happened. However, they probably won’t be able to do much, since these fraudulent sellers are pros at their practice. Just like Nate with his Honda Accord, you’re probably not going to get any of your money back.

And you probably won’t have any luck selling the car. If it broke down in the first place, it may fail any inspections by mechanics, and you’ll have to disclose that information if you try to sell it, unless you want to become a curbstoner yourself.

Car buying should be a fun and enjoyable experience. Unfortunately, thanks to curbstoners and people like them, it often isn’t. You have to be careful when shopping for a new car. If you put in the effort and do the work you need to do, you’ll find the car that’s right for you. And no matter who you’re buying from, these lessons can help you in your process. Whenever you shop, protect your money, and protect yourself.

Sean Pour –  I am the co-founder of SellMax a nationwide car buying service. I got started in the automotive industry at the young age of 14. Additionally, I hold a degree in computer science from San Diego State University, and I am currently 25 years of age.