SIMI VALLEY – The drama surrounding Simi Councilmember Luevanos’s controversial video on immigration as well as comments concerning an alleged Immigration and Customs Enforcement (ICE) raid at a nearby business, continued Monday night with more than an hour of public comment and a lengthy discussion by the Council regarding potential action.

A memo from the City Manager informed the Council of possible action, the strongest being censure and sanctions which was supported by Councilmember Judge for what he described as “falsehoods…lies… and a pattern of unethical behavior and complete lack of integrity.” Lesser action supported by Councilmember Litster suggested an apology and resolution reiterating policy and disavowing Luevanos’s comments.

After personally disavowing Luevanos’s remarks concerning concentration camps, detainees drinking out of toilets, ICE raids at local market, and ICE vans at Shell station, Mayor Mashburn made a motion underscoring several items of the Code of Ethics and Conduct, but did not include a censure. The motion passed 4-1, with Luevanos stunningly dissenting. “Wow!” responded Mashburn and then addressed the audience, “We’re going to move forward.” A censure would have required another meeting to ensure due process.

Simi’s Code of Ethics and Conduct does not permit the use of public resources “for personal purposes,” and the Mayor has the “responsibility to intervene.” All Councilmembers are required to sign a “statement of commitment.” In it, they agree to “avoid and discourage conduct which is divisive or harmful to the best interests of Simi Valley.”

Mayor Mashburn waived his right to limit public comment, allowing all speakers three minutes. The session got off to a contentious start as Moorpark Councilwoman Roseann Mikos, speaking on behalf of 15 elected Councilwomen across Ventura County read a prepared statement in support of Luevanos. Mashburn questioned why his copy of the statement did not include a disclaimer that this was the members’ personal opinions and not the official position of their respective cities. He also observed that four Ventura City Councilmembers signed the statement, which he argued was a quorum of the Council. Mikos lashed out, “We are not going to be bullied by your remarks.” 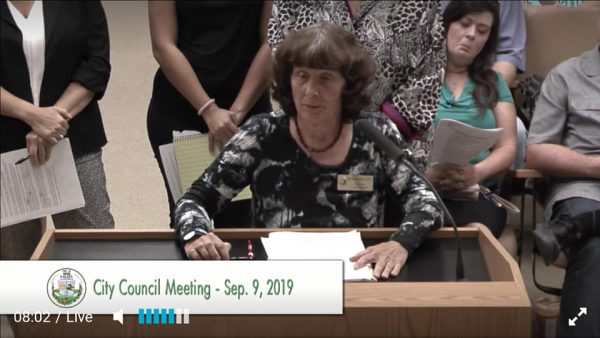 “Sit down. I bully no one,” Mashburn retorted. Mikos verbally stated prior to reading her remarks that they were personal opinion and offered to give Mashburn an updated copy of the written statement.

Another speaker replied that it’s “not a quorum if it’s not the jurisdiction of that city.” Some residents were offended by the presence of outsiders coming to “interfere in the business of our city” and said, “I’m not going out and telling you how to run your city.”

One speaker brought up the importance of equal representation. “If you remove your one minority member, you lose that,” they said, mentioning 15,000 residents speak Spanish as their primary language.

Several speakers asserted their right to refuse to disclose their city of residence and Luevanos advocated on their behalf.

The Chairman of the Ventura County Republican party supported censure while another resident was “happy to see somebody supporting social justice.”

A black woman with a Hispanic father who supported censure spoke out, “America is a Republic and it’s not a Democracy. For the love of God, get a copy of the Constitution please and read it….whoever is sending threats, shame on you.”

Luevanos requested additional time to respond and described the ordeal as “partisan public shaming” as the only Latina and only Democrat.

Multiple Councilmembers reminded the community that they have nothing to do with the recall effort. Mashburn said, “We’re staying completely out of it.”

Litster, the mother of two adopted Hispanic children, felt “there was a breach in the code of ethics” since Luevanos did not explicitly state she was representing her own views and not those of the Council. Mayor Pro Tem Cavanaugh shared concerns about the use of the city logo in the video.

During a 12 minute reply to Litster, Luevanos defended her use of the term “concentration camp” defining it as “mass detention of civilians without trial.” In her defense, she also offered a letter from an Immigration attorney testifying to the detention of some in Simi Valley. 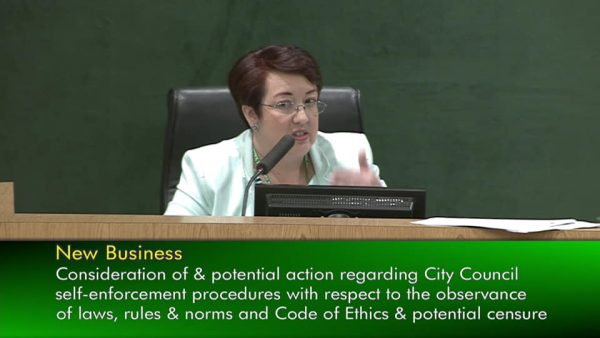 Concerning the impression that she was representing the Council in her controversial video she offered the words, “I’m sorry that you interpreted it that way.”

Mashburn assured Luevanos that this “absolutely is not a trial.”

In one tense exchange between the Mayor and Luevanos after asking for additional time to respond. Luevanos demanded, “It’s a yes or no.”

“Don’t tell me how I’m going to answer,” Mashburn retorted.

Luevanos took offense to Judge’s use of the term “illegal alien” asserting that it is “disrespectful and dehumanizing.” She continued, “I don’t trust that you’re going to take care of our immigrant community,” which was met with a round of applause.

Mashburn said that he contacted the Los Angeles ICE office and was told that there was no record of a raid near the Vallarta market. He was assured that they mainly come in for criminals, not just immigration violations. Mashburn will also be meeting with Homeland Security. He objected to Luevanos’s use of the term “disenfranchised” defining it as having one’s voting rights taken away. “I can’t tell you of an instance where we’ve taken anyone’s voting rights away.” Currently, however, people convicted of a felony lose the right to vote.

Luevanos mentioned that the city still needs bilingual transportation documents to increase access to city services and she personally witnessed a Latina being harassed at a polling place.

Luevanos explained that some residents are afraid of the police and alleged that recently her friend was, “followed by police because he has an older car and brown skin.”

Mayor Mashburn toured the Santa Susana field lab with U.S. Secretary of Energy Rick Perry. With field lab photographs in hand, Mashburn declared, “This place is contaminated and we need to get it cleaned up and we need to do it now.” Some residents, however, thought the Mayor could’ve done more. He went on to mention participation in the Police Explorer fundraiser.

Judge reported that the SCAG regional transportation committee is challenging how the numbers on the new state housing requirements were determined. September 6 Ventura County Transportation Commission (VCTC) meeting in Camarillo closed down by interruption.

Councilwoman Litster reported attending a fundraiser, along with the Mayor, for two burn victim families. She also interviewed cultural arts foundation members with Luevanos. Litster attended Simi Elks Lodge fundraiser for Special Kids Day coming up this week. The event will include a parade and carnival.

Luevanos attended Santa Susana High’s back to school night, met with Central Coast labor leaders and organizers, went to the Youth Council meeting, and Clean Power Alliance Board of Directors meeting concerning the stability of the grid.

Interim City Manager, Brian Gabler, informed the Council that staff is working on preparations for the 2020 census after Luevanos requested the assignment. A speaker during public comment suggested a “task force or committee form to work on the census.”

The Council adopted Ordinance 1299 changing land use designation from Subregional Retail to General Industrial for 2.87-acre parcel near Cochran St./Capper Ln. Motion passed 4-1. Luevanos dissented due to the lack of a sidewalk which was debated at the previous meeting.

Mashburn adjourned in memory of the victims of multiple tragedies: the boat fire, Hurricane Dorian, Texas shooting, and 9/11.

Video of the September 9 meeting is available on the Simi Valley YouTube channel.

Illegal alien is someone who is in the country without official permission to be here. Illegal aliens should be deported whenever and wherever found. As a side note, birthright citizenship of children of illegals should be stopped. I would even go so far as to consider rescinding citizenship previously granted to those born to any here illegally at the time of birth. Any granting of permission to reside here should be based on merit considerations only. No more “family unification”, “chain migration”, etc. as reasons to be here. The policy of requiring immigrants to be self supporting or sponsor supporting should also be reinstituted.

Meet All The Hands That Feed You